Commodity prices reflect the aftermath of to Friday’s disappointing US employment report that showed the world’s top economy added just 120,000 jobs in March, falling short of the 205,000 increase expected. Growth-sensitive crude oil and copper prices are on the defensive while gold and silver are trading higher amid hopes that a stumble in the recovery will retool the case for QE3, stoking demand an alternative to paper currency.

S&P 500 stock index futures are down over 1 percent ahead of the opening bell on Wall Street, pointing to continued risk aversion that is likely to keep oil and copper under pressure. The path forward for precious metals is more nuanced however, relying heavily on the durability of stimulus speculation and its impact on the US Dollar. The greenback was broadly supported overnight as risk aversion selloff stoked safety demand but it is unclear whether this can continue as Wall Street comes online if Fed easing expectations take firm hold.

With this in mind, the spotlight turns to scheduled comments from Fed Chairman Ben Bernanke. The central bank chief will present a lecture on "Fostering Financial Stability" at the 2012 Financial Markets Conference in Georgia, but some mention of Friday’s jobs report may certainly make an appearance. Traders will therefore be keen to dissect Bernanke’s commentary for any clues as to whether the announcement has made QE3 any more of a possibility. A dovish lean is likely to weigh on the Dollar and boost gold as well as silver, while a restatement of the (increasingly upbeat) status quo is likely to have the opposite effect.

Prices are reversing lower from resistance in the 102.97-103.21 marked by January top as well as the 50% Fibonacci retracement to once again challenge the 61.8% level at 101.19. A break below this boundary exposes the rising trend line support set from mid-December, now at 99.97. 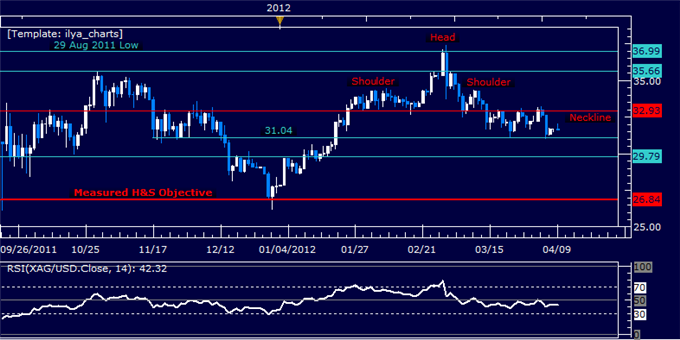 Prices are testing through support at the bottom of a Triangle chart pattern carved out since early February, with a break lower initial exposing the 38.2% Fibonacci retracement at 3.696. A break below this boundary exposes rising trend line support at 3.590. Initial resistance lines up at 3.808. 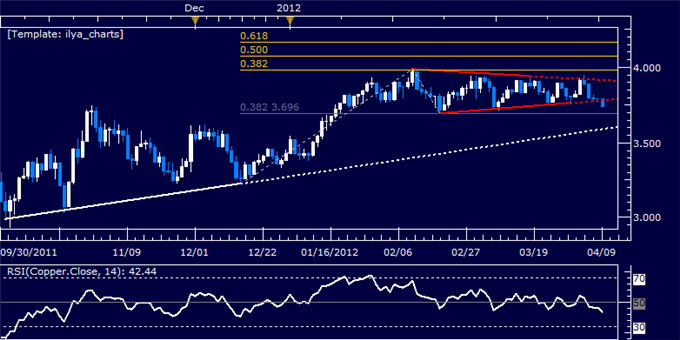