Commodity prices are sinking in European trade amid broad-based risk aversion following comments from Standard & Poor’s analyst Moritz Kraemer warned that Greece may have to undergo another debt restructuring. A disappointing set of Eurozone confidence indicators compounded the dour mood across exchanges, renewing worries about the impact of a now widely expected recession in the region on global growth at large.

Perhaps most ominously, Mr Kraemer noted that official creditors (presumably including the ECB, which owns substantial Greek bond holdings and sat out the most recent PSI outing) will need to take part. He added that assigning “preferred status” to some creditors whereby they don’t participate in a restructuring “significantly increases” the risk for private bond holders and buoys borrowing costs, which “makes it harder for Greece and other countries on the [Eurozone] periphery to establish a sustainable debt trajectory going forward.”

Sentiment-linked crude oil and copper prices moved lower along with stock prices, while gold and silver declined as safe-haven flows poured into the US Dollar and sapped demand for precious metals as an alternative to paper currency. Looking ahead, the spotlight falls on the Federal Reserve speaking calendar, where remarks from Atlanta and Philadelphia Fed Presidents Lockhart and Plosser as well as Chairman Bernanke are on tap. Any perceived increase in the likelihood of QE3 pulled from the comments is likely to broadly boost commodity prices, and vice versa.

On the economic data front, things are relatively quiet. A slight pickup to 350k on weekly initial jobless claims will mean relatively little for the four-week average and so will probably see a muted response from price action. Elsewhere, the Kansas City Fed manufacturing activity gauge is forecast to remain unchanged in March from the eight-month high recorded in February. Finally, the third revision of fourth-quarter US GDP figures is likely to be a non-event absent wild deviations from previously released numbers.

Prices appear to be carving out a descending Triangle chart pattern. The setup generally argues in favor of a turn lower but confirmation is needed on a clear break of support at 104.75, the 38.2% Fibonacci retracement level. Near-term falling trend line resistance lines up at 107.87.

Prices are testing the bottom of a Triangle chart pattern carved out above support at 3.696, the 38.2% Fibonacci retracement level. While the setup is typically indicative of trend continuation, which in this case would be a bullish development, confirmation is needed on a break of either of its boundaries before firm conclusions can be drawn. Near-term support is now at 3.761, while resistance stands at 3.896. 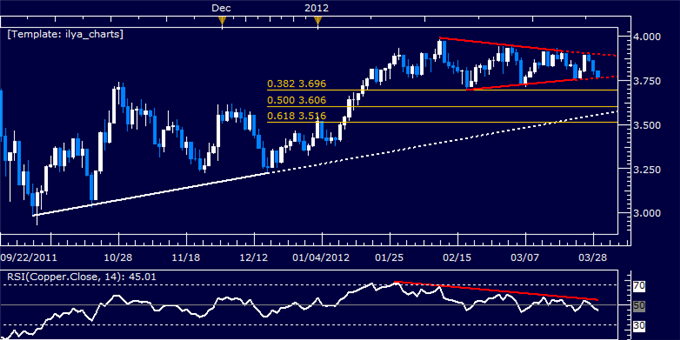