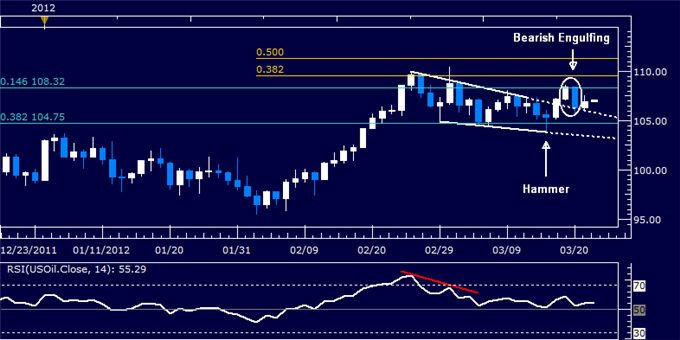 Looking ahead, S&P 500 stock index futures are trading sharply lower, hinting the bloodletting will carry into the opening bell on Wall Street. Bearish momentum may meet a bit of resistance as US economic data comes into the spotlight. The House Price Index reading is expected to see home values rise 0.3 percent to the highest level in five months. Meanwhile, the Leading Indicators gauge is forecast to post the largest monthly increase since March 2011 at 0.6 percent. Weekly Jobless Claims figures are also on tap but expectations point to relatively modest changes that are unlikely to materially impact the four-week trend in initial or continuing applications for benefits, meaning price action is likely to yield a muted response.

Prices put in a Bearish Engulfing candlestick below resistance at 108.32, the 14.6% Fibonacci retracement. It is unclear at this point whether the move marks a true bearish reversal or merely a correction to retest recently broken Falling Wedge top resistance. A break of the next layer of support at 104.75 marked by the 38.2% Fib would act as confirmation. 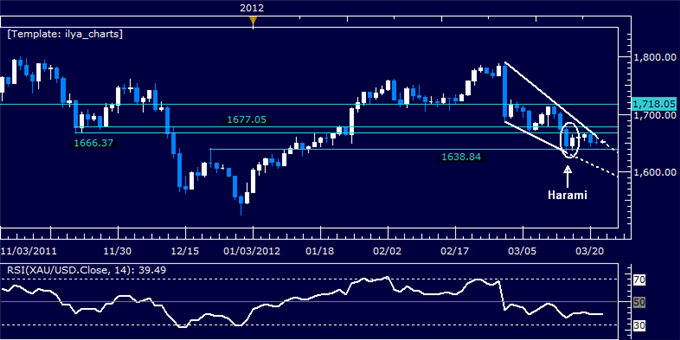 Prices continue to stall having completed a Head and Shoulders top chart pattern with a break below the formation’s neckline at 32.97, the 38.2% Fibonacci retracement level. Initial support remains at 31.67, the 50% Fib, with a break lower exposing the 61.8% retracement at 30.37. The H&S setup implies a measured downside objective at 26.84, which closely coincides with the late December bottom. The 38.2% level has been recast as near-term resistance.

Prices are testing below support at 3.808, the 23.6% Fibonacci retracement, with a break below that exposing the 3.696-3.713 area anew. For the time being, near-term resistance remains at a falling trend line resistance connecting major highs since early February, now at 3.910.