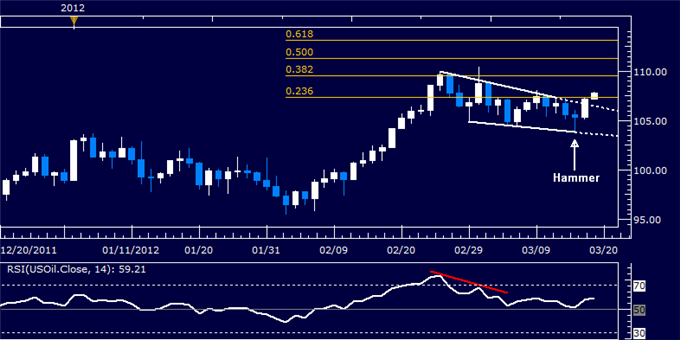 Crude oil prices are evolving into market-moving catalyst onto themselves in the aftermath of Friday’s set of US economic data releases. CPI produced the largest monthly gain in 10 months on the back of higher energy costs. Meanwhile, consumer confidence unexpectedly fell and industrial production stalled. Both outcomes likely owed to more expensive oil at least to some extent as crude’s ascent bleeds into the cost of gasoline and industrial petrochemicals. This is stoking fears that another oil price shock may hobble the emerging recovery in North America (as happened in late 2010 – early 2011)and derail its ability to offset the impact of a recession in the Eurozone on global output at large.

With this in mind, the spotlight turns to comments from New York Federal Reserve President Bill Dudley over the coming 24 hours as traders look to get a sense of how energy-price developments are factoring into the Fed’s policy calculus. A relatively dovish tone that rekindles hopes of new stimulus measures including additional asset purchases (QE3) should the recovery begin to falter is likely to boost gold and silver prices as store-of-value demand returns on the prospect that US Dollar dilution may resume. It is likewise likely to encourage growth-sensitive copper prices higher by reinforcing the prospects for the recovery’s continuity. Alternatively, a neutral outcome echoing this month’s FOMC statement that acknowledges the run-up in oil prices but doesn’t hint at policymakers’ readiness to provide near-term support is likely to have the opposite effect.

As for the WTI contract itself, a significant geopolitical risk premium seems to remain in place and offering support. This is despite promises of renewed talks between Western powers and Iran from EU foreign policy representative Catherine Ashton. Saudi Arabian promises to make up for any shortfall in Iranian supply have also faded in their ability to allay disruption fears. Indeed, in the event that Tehran disrupts shipments through the critical Strait of Hormuz chokepoint, the Kingdom’s crude would find it difficult to reach global markets in size and hold back a sharp spike in prices. The Strait accounted for about 17 million barrels of crude per day, close to 20 percent of global supply and 35 percent of the seaborne variety in 2011 (according to the US EIA). The next-closest alternative outlet for Saudi oil is the Petroline pipeline running across the country from Abqaiq to the Red Sea, which has a capacity of just 5 million bbl/d.

Prices followed a Hammer candlestick with a break through the top of a Rising Wedge chart formation identified last week. The bulls are now testing above initial resistance at 107.35, the 23.6% Fibonacci expansion, with a close above this barrier exposing the 38.2% Fib at 109.56. The Wedge top, now at 106.43, has been recast as near-term support.

Prices appear to be carving out a Falling Wedge bullish reversal chart formation, with a Harami candlestick pattern above support at 1638.84 reinforcing the likelihood of a bounce. Initial resistance lines up in the 1666.37-1677.05 area, with a break above that validating the Wedge setup and exposing resistance barriers at the 1700/oz figure as well as 1718.05. 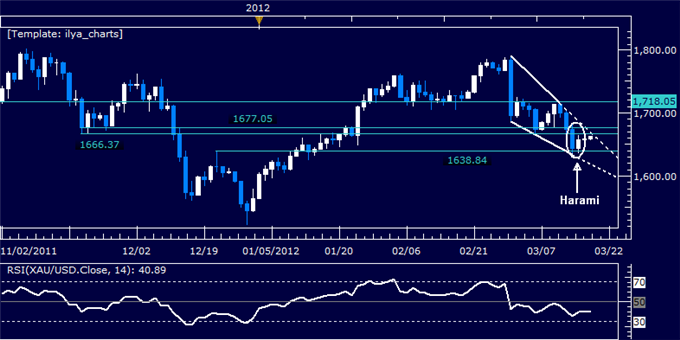 Prices are stalling after completing a Head and Shoulders top chart pattern with a break below the formation’s neckline at 32.97, the 38.2% Fibonacci retracement level. Initial support remains at 31.67, the 50% Fib, with a break lower exposing the 61.8% retracement at 30.37. The H&S setup implies a measured downside objective at 26.84, which closely coincides with the late December bottom. The 38.2% level has been recast as near-term resistance. 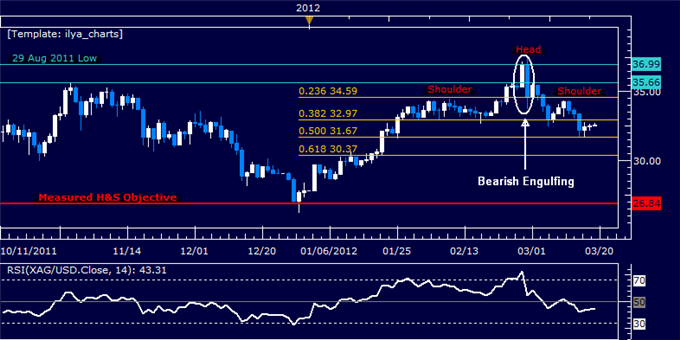 Prices put in a Bearish Engulfing candlestick pattern below falling trend line resistance connecting major highs since early February, hinting a move lower is ahead. Initial support lines up at 3.808, the 23.6% Fibonacci retracement, with a break below that exposing the 3.696-3.713 area anew. Trend line resistance is now at 3.915. 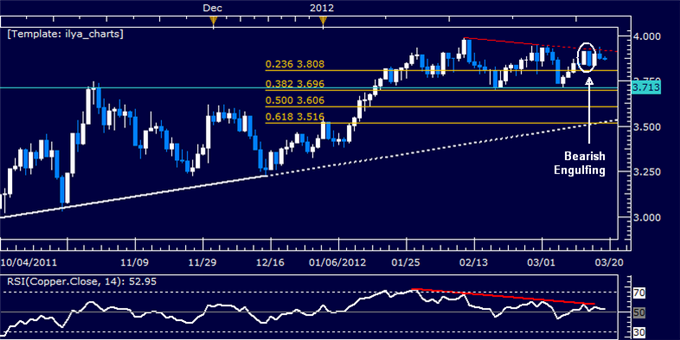