Commodity prices are looking to the upcoming US data set for direction cues as global economic growth concerns remain in focus, with the markets looking to a faster recovery in North America to offset a widely expected recession in the Eurozone. Expectations call for somewhat mixed results.

The Empire Manufacturing Activity gauge expected to tick lower in March having hit a 20-month high in the previous month. Meanwhile, the Philadelphia Fed measure of business confidence is forecast to rise for the fourth consecutive month to hit the highest level since April 2011. Against this backdrop, the weekly Jobless Claims data may serve to tip the scales of sentiment. Economists expect continuing and initial claims to decline in the first and second weeks of March, respectively.

On balance, the markets appear cautiously positioned for a positive outing. S&P 500 stock index futures are pointing higher, hinting risk appetite remains generally supported. The Empire print is expected to be the only major blemish on the data set, which is unlikely to undo the boost from otherwise rosy results if the pullback proves to be as shallow as forecasts suggest, leaving January’s breakout from the downward trajectory in place since October 2009 intact.

This means growth-sensitive copper prices are likely to find some a near-term recovery catalyst after yesterday’s selloff. The results are also likely to further discourage QE3 expectations, maintaining pressure on gold and silver prices as traders abandon the need for an alternative store of value. The likely implications for crude oil are not as clear. Prices fell yesterday after US crude inventories rose and Saudi Arabia pledged to make up any supply shortfall from reduced Iranian shipments. With those factors likely to be mostly priced in at this point, at least a modest pull-up on the back of a firm set of US economic indicators seems reasonable (especially given yesterday’s drop).

As we suspected, prices broke lower after putting in a Bearish Engulfing candlestick, with sellers taking out 23.6% Fibonacci retracement support at 106.50 to expose the 38.2% barrier at 104.38. The 106.50 level has been recast s near-term resistance.

Prices completed a Head and Shoulders top with a break below the formation’s neckline at 32.97, the 38.2% Fibonacci retracement level. Initial support has been found at 31.67, the 50% Fib. Continued selling from here aims for the 61.8% retracement at 30.37. The 38.2% level has been recast as near-term resistance. The Head and Shoulders setup implies an overall downside objective at 26.84, which closely coincides with the late December bottom.

Prices put in a Bearish Engulfing candlestick pattern below falling trend line resistance connecting major highs since early February, hinting a move lower is ahead. Initial support lines up at 3.808, the 23.6% Fibonacci retracement, with a break below that exposing the 3.696-3.713 area anew. Trend line resistance is now at 3.921. 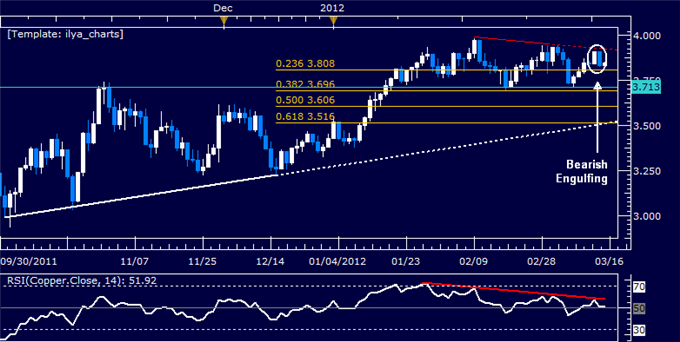