Commodity prices are on the defensive to start the trading week as global slowdown fears creep back into focus across financial markets. Sentiment-sensitive crude oil and copper prices are following Asian and European shares lower. Gold and silver are trading lower as the risk-averse mood stokes safe-haven demand for the US Dollar, putting de-facto downward pressure on the precious metals complex. S&P 500 stock index futures are pointing firmly lower and the economic data offers little to derail momentum, pointing to more of the same as Wall Street comes online.

Newswires chalked up the slump in risky assets to Chinese trade data released over the weekend showing exports grew at an annual pace of 18.4 percent in February, missing forecasts calling for a 31.1 percent increase. Given China’s position as the world’s largest exporter, the outcome was interpreted to reflect slowing global demand. This seems like a bit of a stretch however considering Chinese export figures have been trending lower since May 2010, so while disappointing, the outcome doesn’t reflect anything materially new. Rather, it seems the sour mood reflected the return of big-picture fundamentals as the core driver of price action, with China’s data acting as a trigger rather than a catalyst in its own right.

With the Greek fiasco seemingly in the rearview mirror following last week’s successful PSI outing, investors likely reappraised the landscape only to be reminded of a Eurozone recession slated for this year expected to bring global GDP growth to the weakest since the Great Recession. Friday’s strong US jobs report offered some support to risky assets after it crossed the wires but seems to have lost its potency already as traders look ahead to Tuesday’s FOMC meeting. In this context, good US data is likely translating into downgraded QE3 expectations, weighing on hopes that a ramped-up North American recovery will make for a greater counterweigh to the slump in Europe.

Prices bounced from the 38.2% Fibonacci retracement at 104.38 to retest support-turned-resistance at a rising trend line set from the February 2 low. The move appears corrective for now, with overall positioning still calling for a broadly bearish bias. Trend line resistance is now at 108.83, with a break higher targeting the February 24 high at 109.93. Near-term support stands at 106.50, the 23.6% Fib, with a daily close below that exposing 104.38 anew.

Prices recovered from support in the 1662.10-167.05 region to challenge former support at 1719.76. A break above this boundary exposes the December 2 high at 1763.00. Alternatively, renewed selling that overtakes immediate support initially exposes 1641.62, the December 21 wick high.

Prices recovered from support in the 32.63-32.97 are marked by the February 16 low and the 38.2% Fibonacci retracement to retest the 23.6% Fib at 34.59. On balance, overall positioning appears to favor the downside absent a daily close above 37.48, the February 29 high and peak of a Bearish Engulfing candlestick pattern. A break above 34.59 initially targets 35.66, while a push through support exposes the 50% retracement at 31.67. 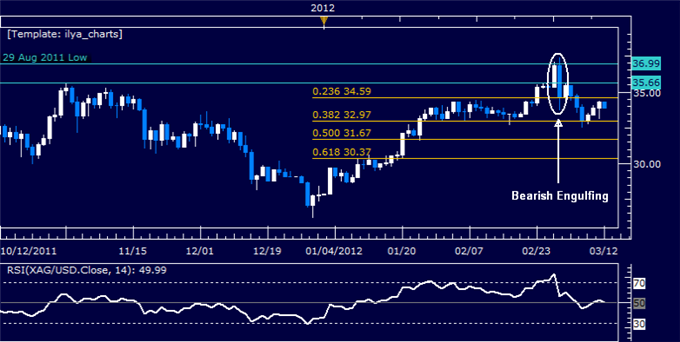 Prices rebounded from support at 3.713, the would-be neckline of a Head and Shoulders top formation, to retest support-turned-resistance at a rising trend line set from mid-December (now at 3.865). A break above that on a daily closing basis would expose the January 27 high at 3.938. Alternatively, a reversal lower that takes out 3.713 exposes a measured downside target at 3.438. 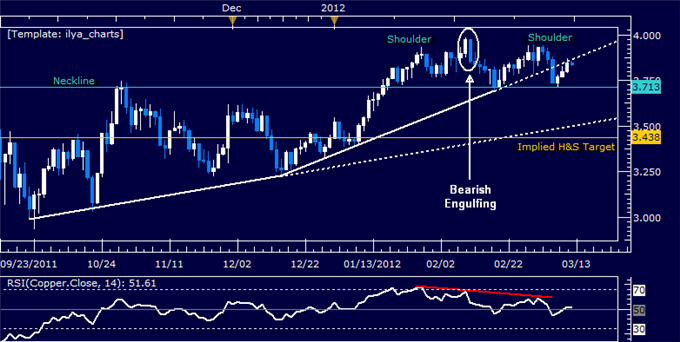