Commodities are rising amid a recovery in risk appetite on hopes that Greece will be able to complete a bond swap by today’s deadline, unlocking funding through its second EU/IMF bailout package. The scheme would have private investors exchange their bond holdings for new paper, accepting a loss of 70 percent on the initial investment.

Firms representing over 40 percent of creditors said they would back the plan yesterday, joining others already committed and stoking optimism that the 75 percent participation threshold aimed for by Athens will be met. S&P 500 stock index futures are pointing aggressively higher before the opening bell on Wall Street, hinting positive cues will carry over into North American trade.

The chipper mood may be dented by the outcome of the ECB rate decision however. Additional accommodative measures now are probably too much to ask for a mere week after a large 3-year LTRO operation, with traders focused on ECB President Mario Draghi’s press conference following the announcement for clues on future efforts.

Besides its impact on the Euro, the outcome is likely to have market-wide dimensions. Expectations of a 2012 recession in the Eurozone – the world’s largest economy when taken collectively – have been a key driver of broader risk aversion. With that in mind, a relatively dovish ECB outing may weigh heavily on the Euro but offer support to risk appetite on hopes that the region’s downturn can be made relatively less severe.

Such a result would offer direct support to growth-linked crude oil and copper prices. It would offer a de-facto boost to gold and silver by way of weighing on safe-haven demand for the US Dollar. Needless to say, a relatively neutral tone to ECB rhetoric that offers nothing conclusive on additional support is likely to yield the opposite response. US Jobless Claims figures enter the picture later in the day as markets begin to gear up for Friday’s NFP report.

Prices corrected higher from support at 104.38, the 38.2% Fibonacci retracement level, but overall positioning continues to appear bearish. The return of selling momentum that takes prices through immediate support exposes the 50% Fib at 102.67. Alternatively, a deeper pull-up through the 23.6% level targets the underside of a formerly broken rising trend line now at 107.81.

Prices are recovering from support in the 32.63-32.97 are marked by the February 16 low and the 38.2% Fibonacci retracement. Near-term resistance lines up at 34.59, the 23.6% Fib. On balance, overall positioning appears to favor the downside absent a daily close above 37.48, the February 29 high and peak of a Bearish Engulfing candlestick pattern.

Prices are rebounding from support at 3.713, the would-be neckline of a Head and Shoulders top formation, to retest support-turned-resistance at a rising trend line set from mid-December now at 3.844. A break above that on a daily closing basis would expose the January 27 high at 3.938. 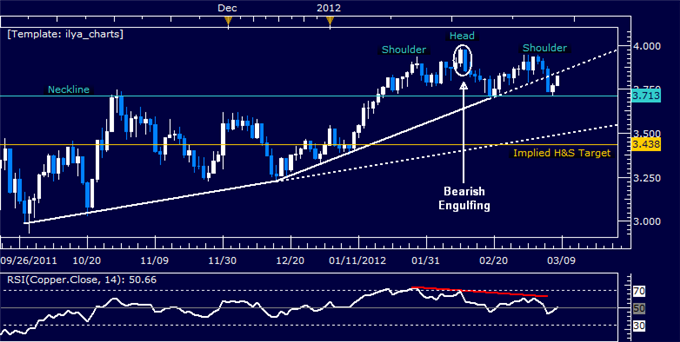