Tensions with Iran continue to inject a considerable geopolitical risk premium into crude oil prices, with the WTI contract touching an 8-month high yesterday. The latest bit of escalation came after talks between Tehran and IAEA came apart after the government refused to allow inspection of a site in Pachin reported to be testing explosives.

Technical positioning warns a pullback may be ahead however (see below), hinting the recent batch of supportive news-flow has been priced in already. Still, with Iran reportedly starting to conduct civilian defense drills in preparation for armed conflict, the satiation is unlikely to be defused quickly (if at all) so the path of least resistance continues to broadly favor the upside.

Gold prices jumped to the highest in 3 month yesterday on the back of a widely-circulated Financial Times article that claimed the Federal Reserve will extend the so-called “Operation Twist” stimulus program beyond June. The scheme has the Fed selling shorter-term assets on its balance sheet in exchange for further-dated ones to target a decline in the long-term borrowing costs. Bloomberg News also cited sources saying buying by automated trading systems buoyed prices.

Looking ahead, strong correlations between precious metal prices US inflation expectations (measured by “breakeven rates”, the spread between nominal and inflation-linked Treasury bond yields) puts the spotlight on US jobless claims and House Price Index figures due today. An overnight pullback in the US Dollar may also emerge as a supportive factor, although a sudden downward reversal in S&P 500 stock index futures in early European trade may reboot safe-haven demand for the greenback to the detriment of both gold and silver. The selloff appears to have followed an EU Commission report forecasting the regional bloc’s collective economy will shrink 0.3 percent in 2012 (compared with previous estimates of a 0.5 percent expansion).

The emerging adverse reversal in risk appetite trends likewise bodes ill for Copper prices. The metal remains highly sensitive to global economic growth expectations, meaning the return of slowdown fears is likely to be a considerable headwind. Selling pressure may be at least partially offset near-term however amid reports that production lagged demand by the largest margin (119,000 metric tons) in November, according to ICSG.

Prices continued higher after putting in a Bullish Engulfing candlestick pattern above support 1714.60, breaking resistance at 1763.00. The bulls now aim to challenge the November 8 high at 1802.80, although early signs of negative RSI divergence hint upward momentum may not prove long-lasting. The 1763.00 level has been recast as near-term support.

Prices are testing above range resistance at 34.37, the February 2 swing high, with an upward breakout exposing the 35.30-66 area. For now, support remains at 32.60, the 23.6% Fibonacci retracement level, though a confirmed upward piercing of 34.37 on a daily closing basis would recast that level as the immediate downside barrier.

Prices have paused after taking out resistance at 3.789 (now acting as near-term support). Renewed upward momentum initially targets 3.909. Alternatively, a break back below 3.789 sees rising trend line support at 3.720. 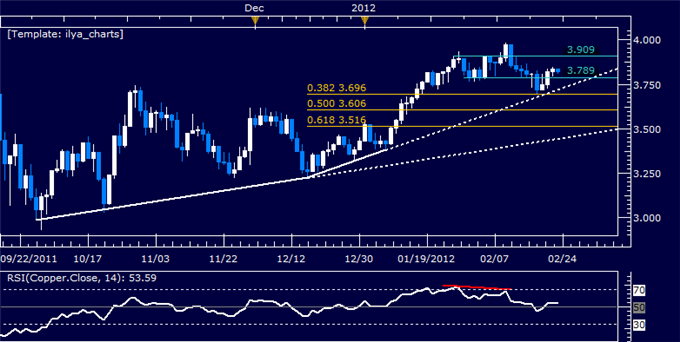