Oil May Rise on US Retail Sales Data, Gold Chart Calls for Weakness

The re-coupling of crude oil prices with market-wide sentiment trends noted last week continues, with short-term correlation studies continuing to strengthen. This appears to suggest the path of least resistance favors the downside in the near term as S&P 500 sink ahead of the opening bell on Wall Street.

Negative sentiment comes courtesy of Moody’s downgrades of a batch of EU countries overnight. Selling may run out of steam however as US Retail Sales figures cross the wires. Expectations call for receipts to rise 0.8 percent, the most in four months, which may boost the demand outlook.

On the technical front, prices have broken resistance at the top of a falling channel set from early January, with the bulls now poised to threaten 101.28. A daily close above this level targets 103.35. The channel top – now at 100.08 – has now been recast as near-term support.

Gold prices continue to track investors’ inflation expectations (tracked by “breakeven rates”, which are the difference between yields on nominal and inflation-adjusted US Treasury bonds). This opens the door for two opposing scenarios. An improvement on the US retail sales front may weigh on gold as QE3 expectations wane. The same data release may likewise offer support if the outcome bolsters risk appetite, punishing the safe-haven US Dollar.

With that in mind, the technical picture appears to favor the downside. Prices appear to be carving out a Head and Shoulders top below resistance at 1763.00, with the peak marked by a Bearish Engulfing candlestick pattern. A daily close below H&S neckline support at 1714.05 is needed for confirmation, exposing a measured target at 1665.03.

Silver’s fundamental profile continues to mirror that of gold, with the metal looking at the potential for two opposing outcomes as US Retail Sales figures cross the wires. As with its more expensive counterpart however, the technical setup favors the downside. Prices are testing through rising trend line support set from late December, with a break lower initially exposing 32.78. Near-term resistance stands 34.37, the February 2 high. The gold/silver ratio continues to show a meaningful inverse relationship with the S&P 500, meaning the cheaper metal is likely to outperform in a risk-on environment, and vice versa.

As with crude oil, sentiment-sensitive copper prices are aiming lower as S&P 500 index futures decline ahead of the opening bell in North America. Likewise in line with the WTI contract however, the US Retail Sales report may stop sellers in their tracks (at least in the near term). Prices are testing through 14.6% Fibonacci retracement support at 3.834, with a break below that exposing the 23.6% level at 3.738. Resistance is at the 4.000 figure. 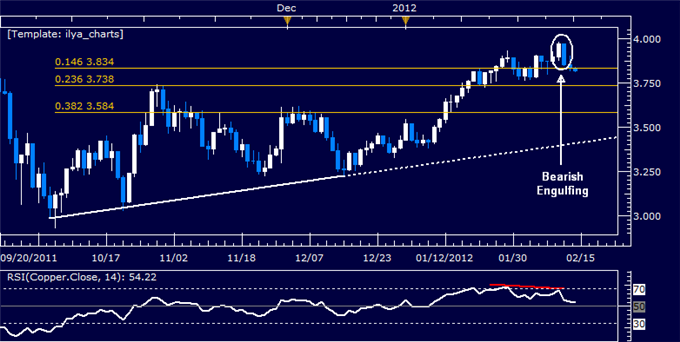