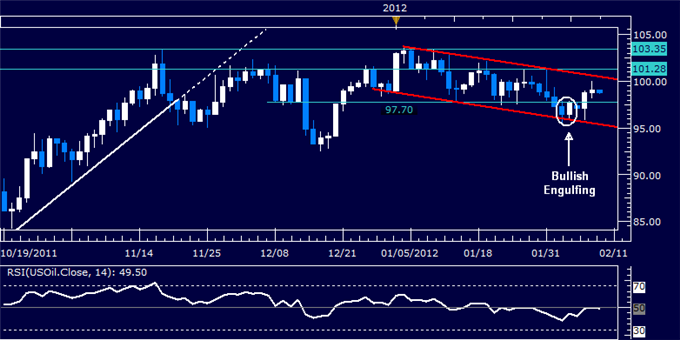 Short-term correlation studies suggest crude prices are seeing some re-coupling with market-wide sentiment trends after tensions between Iran and Western powers overtook the spotlight last week. This puts the spotlight on the Eurozone with traders focused on the outcome of the ECB interest rate decision and a meeting of the currency bloc’s finance ministers meant to finalize agreement on the second Greek bailout.

Markets seem reasonably sanguine about whatever happens with Greece. EU banks borrowed close to €500 billion from the ECB in December and Greece has about €300 billion in outstanding bonds, so a market-wide credit crunch is now relatively unlikely even if talks fail and default occurs. Traders will want details on what (if any) additional measures will be taken to strengthen the firewall between sovereign stress and the banking sector from the ECB however.

Crafting strong-enough defenses to withstand stress in Italy considering the potential for a €1.5-2 trillion hole on banks’ balance sheets in the worst case scenario there will prove substantially more difficult than elsewhere, but doing just that is imperative to restoring confidence. If the ECB delivers, a pickup in risk appetite stands to send the WTI contract higher, and vice versa.

Prices remain wedged between support at 97.70 and resistance at the top of a falling channel set from early January, now at 100.38. The upside barrier is reinforced by a horizontal pivot at 101.28, with a break higher exposing 103.35. Alternatively, renewed selling that takes prices through 97.70 on a daily closing basis clears the way for a test of the channel bottom, now at 95.29.

Eurozone debt crisis issues continue to bleed into gold price action via the US Dollar, with the outcome of today’s ECB rate decision and finance ministers’ meeting in the spotlight. A supportive outcome (as outlined above) stands to weigh on the greenback amid fading safe-haven demand, boosting gold in the process. Needless to say, the inverse scenario is likewise a possibility.

Prices pulled back to test support at the top of a formerly broken rising channel set from early January (now at 1726.13), a barrier reinforced by the 38.2% Fibonacci retracement at 1719.45. A break lower initially exposes 1702.90. Overall positioning has argued in favor of the bearish scenario since prices formed a Bearish Engulfing candlestick pattern on February 3, with a daily close above 1763.07 needed to change the tone to a neutral setting. 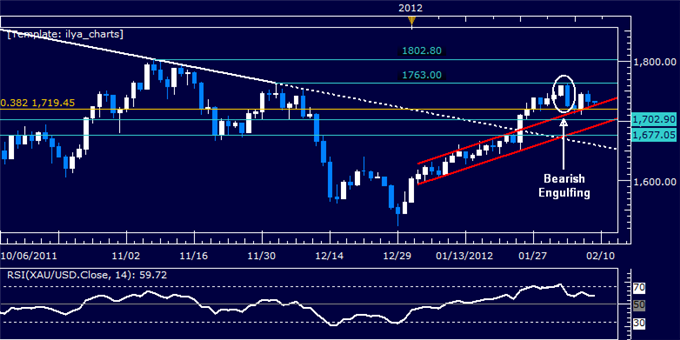 Silver’s core fundamental profile continues to mirror that of gold, with the focus on the trajectory of the US Dollar as set by Eurozone developments. The gold/silver ratio continues to show a meaningful inverse relationship with the S&P 500, meaning the cheaper metal is likely to outperform in a risk-on environment and vice versa.

A Bearish Engulfing candlestick pattern coupled with negative RSI divergence continues to point toward a cautiously bearish bias which needs a close above the February 3 high at 34.38 to be neutralized, exposing the next layer of resistance at 35.30. Rising channel support is now at 33.49, with a break below that exposing 32.78. 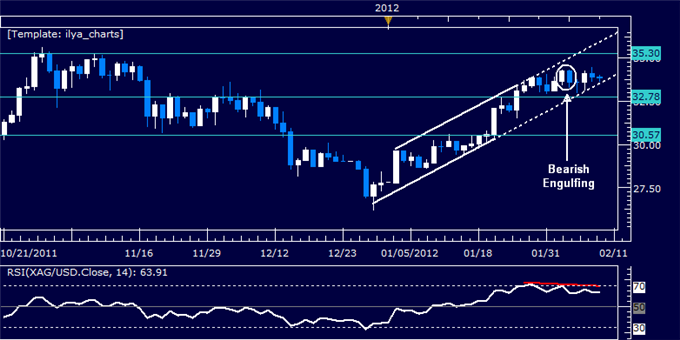 Copper remains highly sensitive to broad-based sentiment trends, so needless to say Eurozone developments are in focus here as with the rest of the risky asset space. S&P 500 stock index futures are pointing cautiously lower ahead of the opening bell on Wall Street, but that is likely a reflection of traders’ appreciation for on-coming event risk rather than a genuine directional bias, meaning it’s hardly telling. Prices are wedged between resistance at 3.938 and support marked by a formerly broken top of a rising channel now at 3.821. A push through support initially exposes 3.749, while a break to the upside targets 4.222. 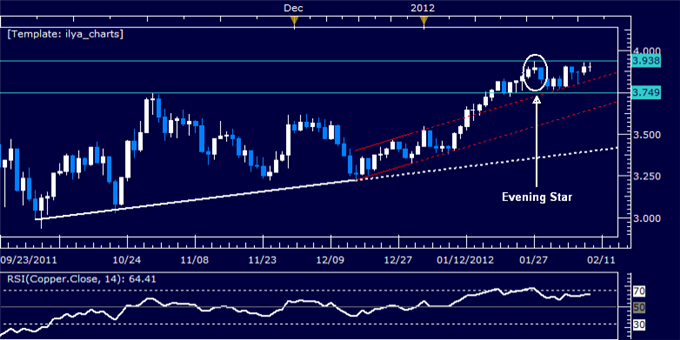