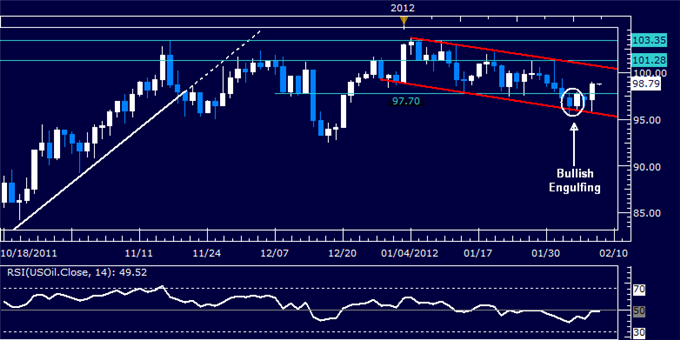 Crude prices shot higher yesterday after API reported the largest inventory drawdown in seven weeks. US Dollar weakness likewise contributed to the pickup as the greenback slumped to the lowest in three months as safe-haven demand unraveled amid a moderation in Greece-related fears.

Looking ahead, relatively little has changed in the overall environment. Policymakers in Athens have yet to produce a concrete outcome but the markets appear sanguine about the possibility of a default, which appears likely to keep the Dollar on the defensive in the short term and offer the WTI contract a de-facto boost. Official DOE inventory figures headline the economic calendar.

Prices broke back above resistance at 97.70, exposing the top of a falling channel set from early January now at 100.49. This hurdle is reinforced by a horizontal pivot barrier at 101.28. The 97.70 level has been once again recast as near-term support.

As with oil, Greek bailout considerations are bleeding into gold price action via the US Dollar, which appears likely to keep the metal relatively supported over the near term. Importantly, it is not clear that the greenback will necessarily decline if a final Greek deal is announced considering a significant part of such an outcome has likely been priced in already, generating a “buy the rumor, sell the fact” dynamic as traders look on to Thursday’s ECB rate decision.

Elsewhere, San Francisco Fed President John Willians – who is now a voting member of the FOMC – is due to come across the wires. Williams tends to fall on the dovish side of the policy spectrum and may give gold an added lift if traders sniff out a push toward a third round of QE.

Prices recovered following a test of 1719.45, the 38.2% Fibonacci retracement level reinforced by a formerly broken channel top set from early January now acting as support. Absent a daily close above 1763.07 however, a Bearish Engulfing candlestick pattern warns of renewed selling ahead. 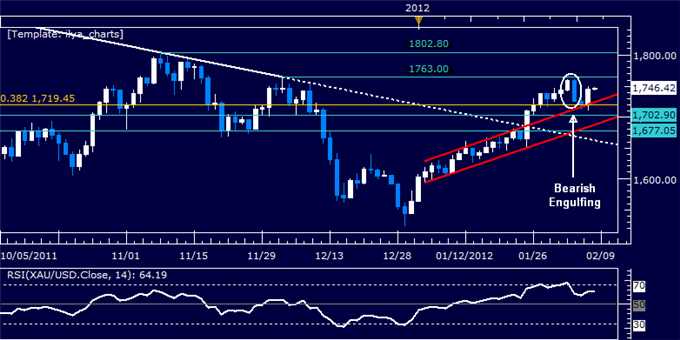 Silver’s core fundamental profile continues to mirror that of gold, with the focus on the trajectory of the US Dollar as set by the evolving situation in Greece as well as any clues about forthcoming Fed stimulus from John Williams’ commentary. Notably, the gold/silver ratio continues to show a meaningful inverse relationship with the S&P 500, meaning the cheaper metal is likely to outperform its more expensive counter-part in a risk-on environment and vice versa.

A Bearish Engulfing candlestick pattern coupled with negative RSI divergence continues to point toward a cautiously bearish bias which needs a close above the February 3 high at 34.38 to be neutralized, exposing the next layer of resistance at 35.30. Rising channel support is now at 33.30, with a break below that exposing 32.78. 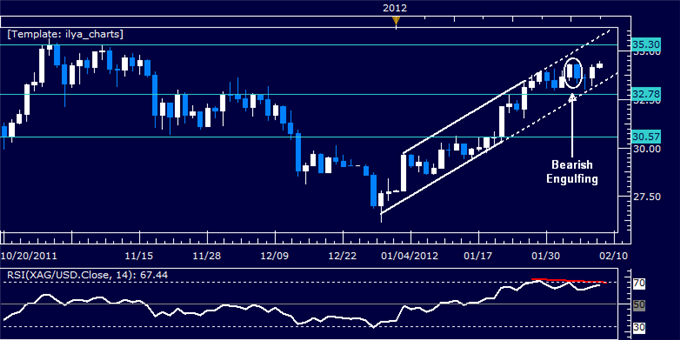 Copper remains highly sensitive to broad-based risk appetite trends, where the spotlight is pointed squarely at Athens and the outcome of negotiations on the terms of the country’s second EU/IMF bailout. S&P 500 stock index futures positioning is inconclusive ahead of the opening bell on Wall Street and the data docket, offering little by way of direction cues. Prices are wedged between resistance at 3.946 and support marked by a formerly broken top of a rising channel now at 3.811. A push through support initially exposes 3.713, while a break to the upside targets 4.222. 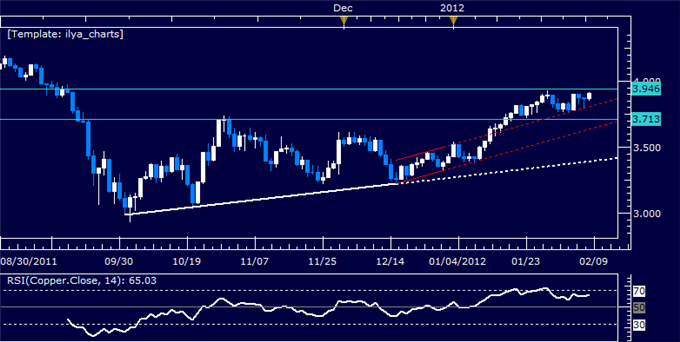