Crude oil continued to move lower yesterday as fears of an imminent blow-up of tensions between Iran and Western powers continued to unwind. The focus now turns to the closely watched US Employment report. Consensus forecasts call for the economy to add 140,000 to mark a slowdown from the 200,000 increase recorded in December. European stock exchanges and S&P 500 index futures are trading higher ahead of the release, suggesting traders are interpreting the would-be slowdown in hiring to mean the Fed will be more likely to take additional stimulative action and speed the arrival of a third round of quantitative easing (QE3) in its wake.

However, the details of the report will prove critical to its ability to move markets considering there is a significant degree of seasonality in January’s report. Indeed, the jobs report has a tendency to undershoot expectations in the first month of the year both because of a BLS birth and death statistical adjustment as well as the unwinding of temporary labor accumulated through the December holiday season. To that end, it is not clear that a lower headline figure is necessarily telling.Needless to say this also means that a positive surprise would probably generate an outsized pullback across the spectrum of risky assets, including the WTI contract.

Sizing up technical positioning, sellers are testing the previously broken top of a falling channel set from mid-November recast as support (now at 95.55) after taking out 97.70. A push beneath this boundary initially exposes the 93.90-93.35 area. The 97.70 level is now acting as near-term resistance.

Inflation expectations remain in focus for gold prices, with the US Employment report naturally in the spotlight. As noted above, the weaker print being expected is likely to stoke QE3 expectations, an outcome supportive of inflation-hedge gold demand. An upside surprise (including a more modest slowdown from December’s reading than is being expected) appears likely produce the opposite result.

Silver is expected to mirror’s gold’s response to the US Employment report, treating the outcome as a gauge of QE3 probability. On the technical side of things, prices took out resistance at 34.03 yesterday, exposing the next barrier at 35.30. However, negative RSI divergence warns of waning bullish momentum and hints at the growing threat of bearish reversal. The 34.03 barrier has been recast as support, with a push back below that targeting 32.78.

Copper fell yesterday after SouFun Holdings Ltd. Reported that Chinese house prices fell for a fifth month, hinting construction may slow in the months ahead and threatening to erode demand from the world’s biggest importer of the base metal. Not surprisingly, the focus now turns to the US jobs report and its implications for the QE3 outlook (and thereby for global economic growth hopes).

Near-term support remains at the top of a rising channel set from mid-December, now at 3.774, while resistance lines up at 3.895. An as-yet uncontested Evening Star candlestick pattern warns a top may be in place, with a daily close above 3.895 needed to negate bearish cues in favor of a neutral tone. 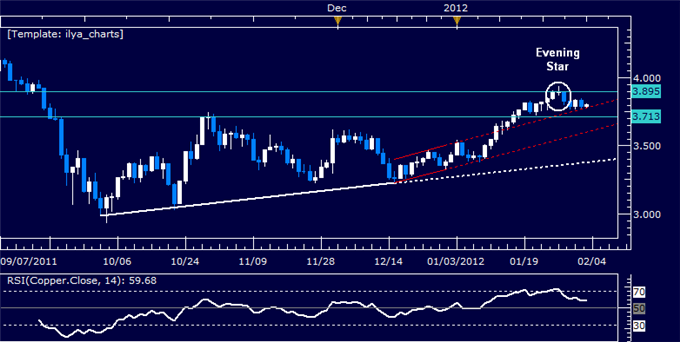