Crude oil’s decoupling from risk sentiment trends continued yesterday as prices declined even as supportive manufacturing data from China, Europe and the US came across the wires, with prices finally cracking support at 97.70 after senior IAEA officials confirmed expressed optimism following their weekend trip to Iran. Another trip has been planned for late February, easing fears that Tehran’s controversial nuclear program will lead to the eruption of overt conflict with Western powers.

Looking ahead, growth-related issues are likely to return into focus as the spotlight points to Fed Chairman Ben Bernanke’s congressional testimony. The outcome will likely need to materially advance the case for near-term QE3 to prove market-moving, in which case it stands to push prices higher. On balance, this seems like a tall order after last week’s overtly dovish FOMC outing, hinting at a muted response as traders dig in their heels ahead of Friday’s US jobs report. Near-term support is now at 95.65, marked by the top of a previously broken falling channel, while the 97.70 level has been recast as resistance.

Inflation expectations remain in focus for gold prices, with Ben Bernanke’s testimony clearly the most significant item of concern. Prices soared after last week’s lurch to the dovish side of the spectrum following the FOMC policy announcement and have been buoyant since. This suggests much of the Fed’s accommodative stance has been priced in already, meaning there is probably a high bar needed to be overcome on how much more dovish Bernanke must take his rhetoric to engineer substantial upside momentum.

Prices are testing above resistance at 1746.10, with a confirmed break on a daily close above the level exposing 1802.80. However, negative RSI divergence warns that bullish momentum is fading and hints a reversal is ahead. Near-term term support lines up at 1716.17, a previously broken rising channel top.

As with gold, inflation expectations are in focus for silver prices, with both metals trading on investors’ appraisal of their utility as store-of-value hedges. Needless to say, Ben Bernanke’s testimony is critical here as well over the coming 24 hours. The technical picture remains cautiously bearish after prices completed a Three Inside Down candlestick pattern below resistance at 34.03, hinting at losses ahead. A break below support at 32.78 exposes rising trend line support set from late December, now at 31.96.

Ben Bernanke’s testimony is central for the copper prices as with most assets in the coming hours, with the onus on the Fed Chairman to stoke the economic growth outlook and perpetuate yesterday’s mild recovery. Near-term support remains at the top of a rising channel set from mid-December, now at 3.768, while resistance lines up at 3.895. An as-yet uncontested Evening Star candlestick pattern warns a top may be in place. 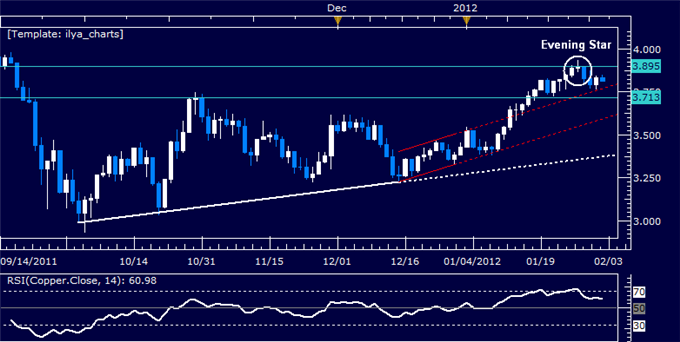