Crude oil is tracking higher in European trade amid a broad-based upward push across the spectrum of risky assets. The newswires are chalking up optimism to the outcome of yesterday’s EU leaders’ summit, where policymakers nominally advanced the cause of long-term budgetary discipline. The upswing appears highly suspect however.

Indeed, the summit missed the mark on its most critical objective – defusing the near-term threat of a disorderly sovereign default unleashing another worldwide credit crunch – as officials put off finalizing the permanent ESM bailout fund and failed to secure agreement on private-sector involvement (PSI) in the second Greek bailout needed to secure near-term funding for the debt-strapped nation. With this in mind, the ability of the cheerful mood now evident across financial markets to remain supported appears unlikely.

On the technical front, prices continue to consolidate above support at 97.70, with the first layer of resistance still at 101.28. A break lower exposes resistance-turned-support at the top of a falling channel set from mid-November, now at 95.98. Alternatively, a push higher initially targets the mid-November high at 103.35.

The upswing in risky assets is offering de-facto support to gold prices by way of downward pressure on the safe-haven US Dollar, but as described above, the move appears to be a knee-jerk reaction rather than something that is durable. Sizing up the chart setup, pricesput in a bearish Harami candlestick pattern below resistance at 1746.10, hinting a move lower is ahead. Initial resistance-turned-support stands at 1707.00, the top of a rising channel set from early January. Alternatively, a break higher exposes 1802.80, the November 8 swing high.

As with gold, silver is on the upswing amid broad-based US Dollar weakness but the move appears unlikely to prove lasting. Indeed, prices put in a bearish Dark Cloud Cover candlestick pattern below resistance at 34.03, hinting a move to target initial support in the 32.78-33.30 area is ahead. A break below that region targets a rising trend line now at 31.55.

Not surprisingly, highly cycle-sensitive copper prices are mounting a recovery amid the broad-based improvement in risk appetite. Still, absent a daily close above 3.895, yesterday’s bearish Shooting Star candlestick and subsequent confirmation on the following bar remain valid and call for forthcoming weakness. Negative RSI divergence reinforces the case for a downside scenario. Initial support lines up at 3.713. 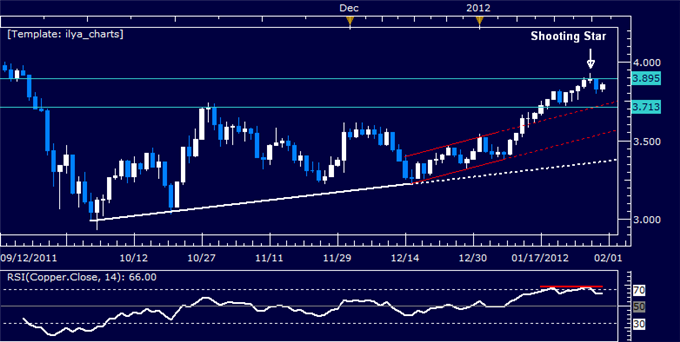