Crude oil prices have somewhat decoupled from wider market trends, with the WTI contract stuck in a familiar range for the past two weeks. The standstill likely owes to a geopolitical situation in flux as Iran and the West continue to exchange barbs. UN nuclear experts arrived in the country over the weekend and markets will look closely at their findings, although the rhetoric in Tehran seems to be heating up already as the administration says it will cut off exports to “some” countries despite having initially postponed a halt to crude sales pending the inspectors’ report.

Prices continue to consolidate above support at 97.70, with the first layer of resistance still at 101.28. A break lower exposes resistance-turned-support at the top of a falling channel set from mid-November, now at 96.11. Alternatively, a push higher initially targets the mid-November high at 103.35.

Gold is pulling back to start the week as the US Dollar soars amid anxiety ahead of the EU leaders’ summit, putting de-facto downward pressure on prices. The outcome of the sit-down will be critical to establish the near-term directional bias, with a failure of regional officials to mollify jittery investors likely to translate into further downside as the safe haven flows propel the greenback higher.

Sizing up the chart setup, pricesare recoiling from resistance at 1746.10, with a correction lower seeing initial support at 1704.03 marked by the top for a rising channel that previously acted as resistance. Alternatively, a break higher exposes the early November swing top at 1802.80.

As with gold, silver is looking to EU leaders’ summit and its implications for the US Dollar as the primary driver of directional momentum over the near term. Prices are putting back from resistance at 34.03, with initial support lining up in the 32.78-33.30 area. A break below that targets a rising trend line now at 31.34. 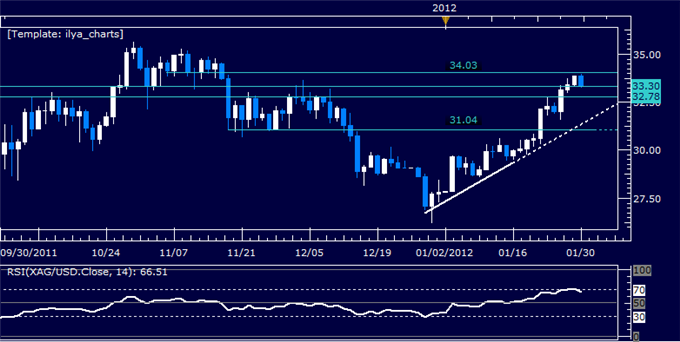 Copper is swiftly sinking after putting in a Shooting Star candlestick below support-turned-resistance at 3.895 amid the broad-based selloff across the spectrum of risky assets before the outcome of the EU leaders’ summit. Initial support lines up at 3.721, with a break below that exposing 3.591.