As we suspected yesterday, crude oil prices edged higher after an overtly dovish FOMC announcement sank the US Dollar. The move higher was muted by a pickup in inventories however, where the weekly build more than doubled expectations. Looking ahead, a mixed set of US economic data is ahead, with expectations calling for a slowdown in Durable Goods Orders but improvements on the composite Leading Indicators index and New Home Sales. However, the earnings calendar may prove most market-moving as a hefty dollop of industrials report results, with traders particularly interested in guidance from the likes of Caterpillar Inc as a proxy gauge of the global business cycle (and thereby oil demand prospects).

On the technical front, positioning is broadly unchanged from yesterday. Prices continue to consolidate above support at 97.70, with the first layer of resistance still at 101.28. A break lower exposes resistance-turned-support at the top of a falling channel set from mid-November, now at 96.37. Alternatively, a push higher initially targets the mid-November high at 103.35.

Not surprisingly, gold soared after the Federal Reserve extended its pledge to keep interest rates at “exceptionally low” levels to the end of 2014 from the previously promised mid-2013. With the central bank determined to keep borrowing costs near-zero for the foreseeable future and recent US economic data pointing to a pickup in activity, inflation expectations are understandably climbing and boosting demand for the yellow metal as a store-of-value hedge. Indeed, the 2-year breakeven rate – a measure of inflation expectations derived from bond yields – soared to the highest in nearly 7 months after the FOMC outcome crossed the wires.

With that in mind, the only scenario wherein gold would not have scope for another substantial leg higher over the coming months would be if the Fed is right in its skepticism over the progress the economy is making. With that in mind, the focus now turns to US economic indicators. An aggressive uptrend in an index tracking US economic data surprises compiled by Citigroup beginning in June ran out of steam in December, drifting sideways since. A similar run-up between August 2010 and March 2011 likewise fueled hopes for a rosy turn in the recovery only to fall flat, so perhaps something similar is playing out now. If so, inflation expectations will subside and gold will find it difficult to press higher, but it will likely be some time before investors see enough evidence to make a call one way or the other. Meanwhile, gold appears poised firmly higher absent a flare-up in Eurozone stress that forces a rally in the US Dollar.

Sizing up the chart setup, pricesblasted through horizontal resistance at 1677.05 as well as a falling trend line established from early September, with the bulls now aiming to challenge 1750.87. Near-term support stands at the $1700/oz figure, a psychological threshold reinforced by former resistance at the top of a minor channel set from early January.

As with gold, silver prices soared higher after the dovish FOMC outcome stoked future inflation bets, with more of the same seemingly likely ahead. Likewise in line with its more expensive counterpart, the spotlight now turns to US economic data to see if positive momentum resumes or falters, with the latter scenario likely to defuse what will otherwise almost certainly amount to another major advance for precious metals. Prices are testing resistance in the 38.78-33.30 region, with break higher exposing 35.30. Near-term support lines up at 31.04.

Copper prices continued to edge higher yesterday as the Fed pledge to keep monetary policy firmly on the accommodative side of the spectrum through the end of 2014 bolstered the demand outlook for the highly cycle-sensitive metal. As with crude oil, the spotlight now turns to the upcoming batch of fourth-quarter earnings reports from the industrials complex. Prices are now testing above resistance at 3.875, with a break above that exposing the 4.000 figure followed by the late-August top at 4.170. 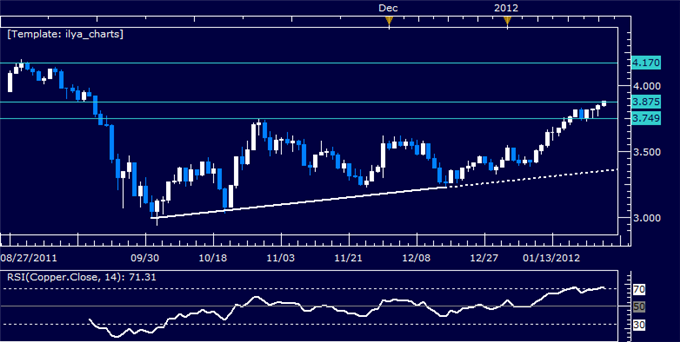