Geopolitical tension appears to be taking over as the main catalyst for crude oil prices. Indeed, correlations with measures of risk appetite – the S&P 500 as well as the MSCI World ex US index – are substantially diminished as all eyes turn to the escalating saber-rattling between the West and Iran, with the EU now set to join the US in boycotting the country’s energy exports and setting off worries of a retaliatory shut-down of the Strait of Hormuz.

It remains unclear to what extent the parties are willing to compound the situation, leaving the WTI contract oscillating in a choppy range above support at 97.70. A break lower exposes resistance-turned-support at the top of a falling channel set from mid-November, now at 96.64.Alternatively, a push higher through immediate resistance at 101.28 initially targets the mid-November high at 103.35.

Gold has drifted steadily higher since the beginning of the year, finding support in a confluence of complimentary developments. First, an increasing appreciation for improving US economic data across financial markets coupled with the Federal Reserve’s pledge to keep borrowing costs “exceptionally low” through mid-2013 is boosting short-term inflation expectations, a trend evident in rising 1-year breakeven rates. Second, worries about the destabilizing effects of the Eurozone debt crisis and the dust-up between Western powers and Iran stoke safe-haven demand. Finally, the downward correction in the US Dollar is offering de-facto support.

The inflation-hedge component of demand seems to be in focus, with prices developing a significant correlation with the S&P 500 despite the benchmark US stock index’s apparent decoupling from the rest of the global equity space. With that in mind, S&P 500 futures are pointing lower ahead of the opening bell in North America, hinting a pullback is likewise ahead for the yellow metal. The fourth-quarter earnings calendar is in focus, with twenty-six S&P 500 companies due to report results as traders look to firms’ guidance for continued evidence of a firming US recovery.

Sizing up the chart setup, pricesare testing support-turned-resistance at 1677.05, a barrier reinforced by the top of a rising channel set from early January now at 1686.98. A break above the latter level exposes the 1700/oz figure. Channel support is now at 1654.13, with a daily close below that initially targeting 1638.84.

As with gold, silver is finding support as improved US economic performance coupled with a pledge for continued accommodation from the Fed boosts near-term price growth bets. Likewise akin to the yellow metal however, prices appear likely to pull back as S&P 500 stock index futures sink en route to the opening bell on Wall Street. The technical setup is supportive of such a scenario, with prices showing a bearish Spinning Top candlestick below rising channel resistance. Initial support lines up at 31.04.

Not surprisingly for the world’s third-most used industrial metal, copper is tracking closely with overall risk appetite trends. Over the near term, this puts the spotlight on the fourth-quarter earnings docket, with traders paying particular attention to results from electrical goods maker Cooper Industries given the company’s heavy use of the metal as in input in production as well as railway operator Norfolk Southern as a proxy for broad-based cyclical trends.

The pre-open drop in S&P 500 futures hints the path of least resistance favors the downside, a scenario bolstered by the appearance of a Bearish Engulfing candlestick pattern. Initial support lines up at 371.50, with a break below that exposing 356.50. Initial resistance lines up at 390.00. 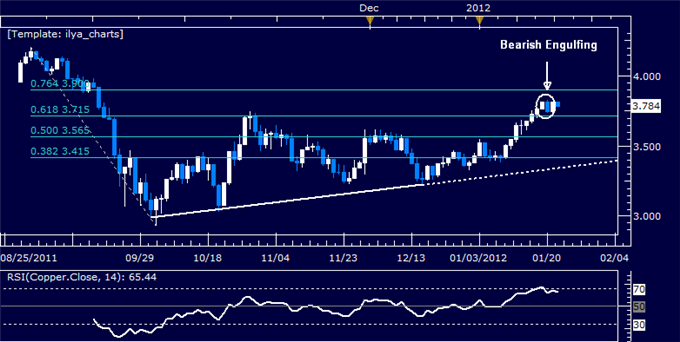