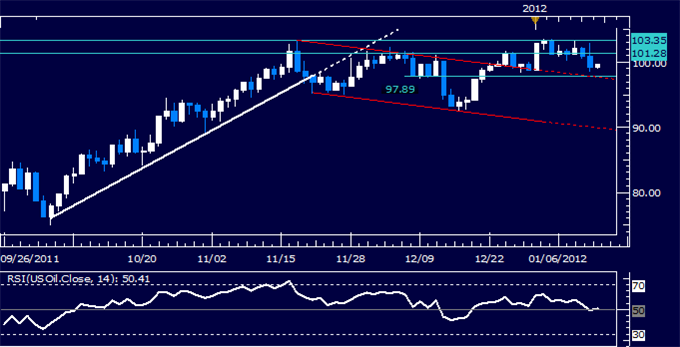 European shares are on the upswing and S&P 500 futures point to more of the same as Wall Street comes online in the afternoon, hinting crude oil prices are set to rise after yesterday’s selloff amid a broad-based recovery in risk appetite. The drop came after tanker-tracking company Oil Movements said OPEC shipments will reach a yearly high of 23.66 million barrels in January.

A bit of relief on the Eurozone debt crisis front is the catalyst behind improving sentiment into the week-end after yields fell at Italian and Spanish debt auctions yesterday while ECB President Draghi said the record-high size of the bank’s deposit facility doesn’t reflect the money allocated at December’s 3-year LTRO money (which he claimed is making its way into the broader economy), counteracting fears that the QE-by-stealth program was failing to provide the intended stimulus.

Investors’ confidence will be tested again as Italy sells a tranche of 2014 and 2018 paper. Another drop in yields will perpetuate profit-taking on short-risk positions, with the UofM gauge of US consumer confidence poised to add fuel to the fire as expectations call for the highest reading in seven months. The fourth-quarter earnings report from JPMorgan Chase may prove to be at least somewhat of a countervailing factor however if the bank’s guidance reflects worries about exposure to Eurozone sovereign stress. Earnings are expected to drop 34.7 percent to $0.901 per share.

On the technical front, prices confirmed yesterday’s narrow break below support at 101.28, pushing aggressively lower through the $100/barrel figure toward the next downside barrier at 97.89. A break below this juncture exposes 94.58 and 92.51. The 101.28 level has been recast as near-term resistance.

Gold is under pressure in European hours, with the moderation in Eurozone debt crisis fears seemingly behind the move lower. Indeed, mirroring developments with the US Dollar, the yellow metal is shedding its correlation with the S&P 500 while the relationship with the MSCI World ex US Index remains significant. The latter gauge had underperformed the former under the weight of Eurozone solvency fears against a backdrop of improving US data. Looking ahead, selling pressure may hold up as an uptick on US consumer confidence cuts into QE3 hopes, although US Dollar weakness may prove to be mitigating factor. 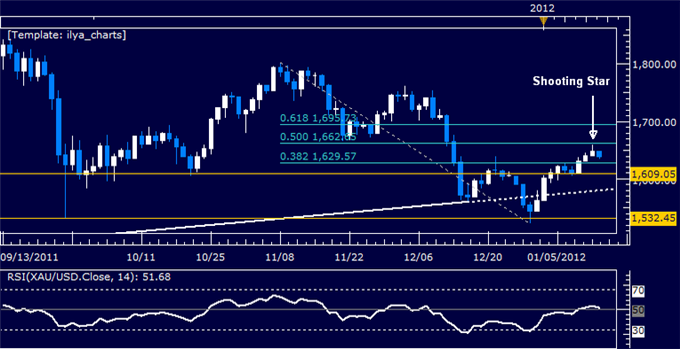 As with gold, silver is ticking downward ahead of the opening bell in North America amid a moderation in Eurozone debt crisis worries. Prices are pulling back to retest former resistance now recast as support at 29.79, a barrier reinforced by a previously broken channel top at 29.40. A break below the latter level exposes 28.41. Near-term resistance is at 31.04. The larger 26.05-35.66 range remains intact. 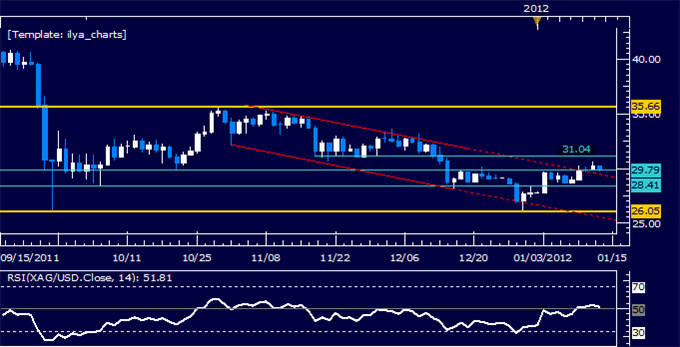