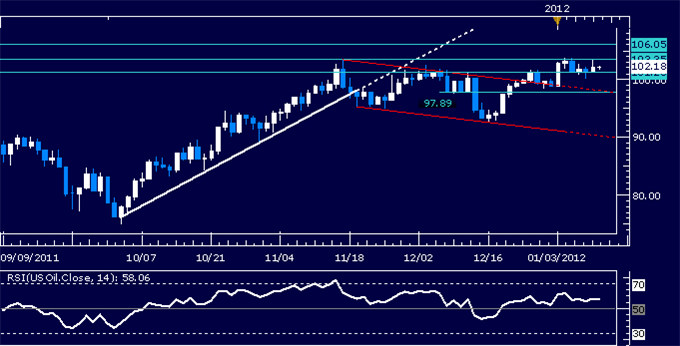 S&P 500 stock index futures are pointing sharply lower ahead of the opening bell on Wall Street, hinting crude oil prices are likely to decline amid a return to risk aversion. The sudden about-face in sentiment trends seems to underscore our suspicion that yesterday’s sharp recovery across the spectrum of risky assets reflected a correction driven by profit-taking rather than the emergence of true optimism in the macro environment.

Looking ahead, the spotlight falls on the Federal Reserve’s Beige Book regional economic conditions survey. US data has clearly shown signs of steady (if slow) improvement over recent months and traders will look to the release as fodder for hopes that an accelerating recovery in the world’s top economy will help offset headwinds from slowing growth in Europe and Asia. The official set of weekly DOE inventory figures is also on tap.

On the technical front, prices remain locked between support at 101.28 and resistance at 103.35, the November 17 high. A downward breakout clears the way for a challenge of the 100.00 figure and 97.89. Alternatively, an upswing that takes out resistance on a daily closing basis initially exposes 106.05.

The US Dollar remains the leading pace-setter of gold price action, acting as a transmission mechanism for overall sentiment trends. With that in mind, the return of risk aversion telegraphed in S&P 500 index futures’ positioning points to recovering safe-haven demand for the benchmark currency, amounting to de-facto downward pressure on gold prices. As with crude oil however, there may be scope for a supportive Beige Book release to counterbalance bearish momentum (at least to some extent).

Sizing up the chart setup, pricesclosed narrowly above resistance at 1629.57, the 38.2% Fibonacci retracement, hinting a move higher to challenge the 50% level at 1662.65 is ahead. The narrow margin of the breakout as well as the failure to overcome the December 21 high 1641.62 makes the bullish argument somewhat suspect however, hinting it may prove to be head-fake. A break back through support initially exposes 1609.05. 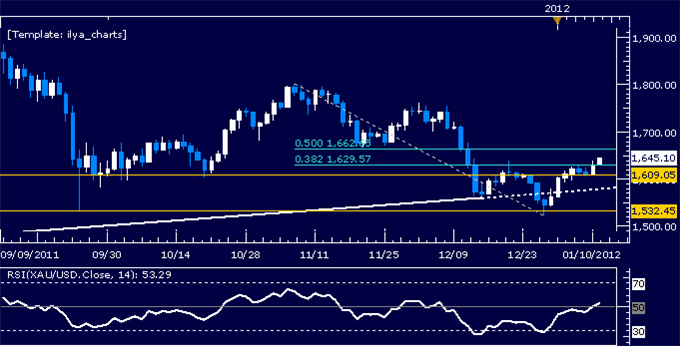 As with gold, silver appears set to decline over the coming session as the US Dollar returns to the offensive amid returning risk aversion. The technical setup has turned cautiously supportive however, with prices taking out resistance at 29.79 marked by a horizontal barrier and the top of a falling channel set from early November. The next boundary on the upside is 31.04, although a break back below 29.79 on a daily closing basis would suggest yesterday’s move may have been a head-fake (as we suspect with gold). The larger 26.05-35.66 range remains intact. 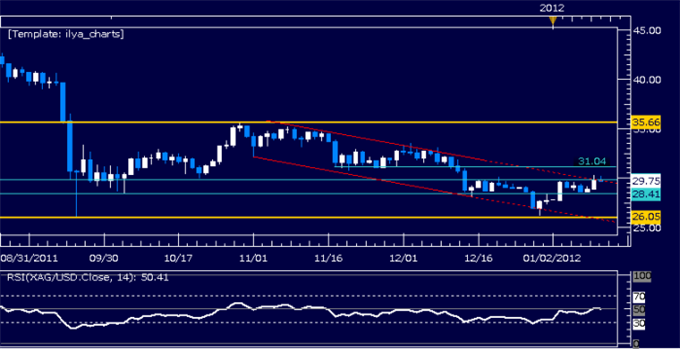