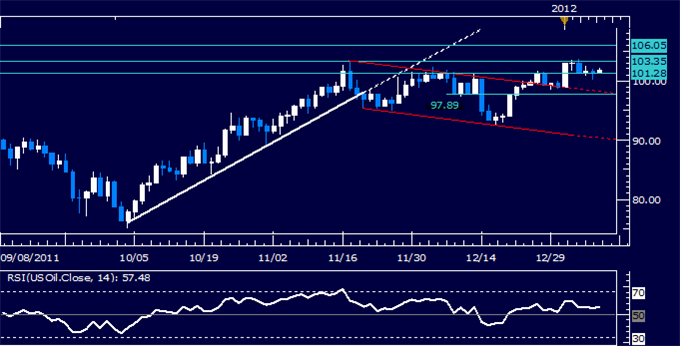 European shares are pushing higher in early trade and S&P 500 stock index futures are firmly in positive territory, pointing to a broad-based recovery in risk appetite that bodes well for growth-sensitive commodities including crude oil. The apparent turn in sentiment likely owes to profit-taking as markets look ahead to the fourth-quarter set of corporate earnings set to begin crossing the wires this week against a backdrop of improving US economic data. Cautious optimism on the Eurozone debt crisis front may also be playing a role after German and French leaders said a new framework for fiscal governance within the currency bloc may be complete by the end of January, one month ahead of schedule.

Looking ahead, a meeting between German Chancellor Angela Merkel and IMF Managing Director Christine Lagarde is on tap, with traders looking for further signs of building momentum toward containing sovereign solvency jitters in the Euro area. November’s US Wholesale Inventories report and the preliminary set of weekly inventory figures from API headline the economic calendar.

On the technical front, prices remain locked between support at 101.28 and resistance at 103.35, the November 17 high. A downward breakout clears the way for a challenge of the 100.00 figure and 97.89. Alternatively, an upswing that takes out resistance on a daily closing basis initially exposes 106.05.

The fundamental landscape appears little changed from yesterday, with gold prices ending higher in Europe on the back of US Dollar weakness driven by a recovery in risk appetite. More of the same appears likely ahead as S&P 500 futures point to continued strength in the sentiment-linked assets as Wall Street comes online, with the Merkel/Lagarde meeting standing out as key event risk.

Sizing up the chart setup, pricesare edging lower following a test of resistance at 1629.57, the 38.2% Fibonacci retracement level, hinting a move lower is ahead. Initial support lines up at 1577.41, a long-term rising trend line based from October 2008. Alternatively, a reversal higher through the 38.2% level exposes the 50% Fib at 1662.65. 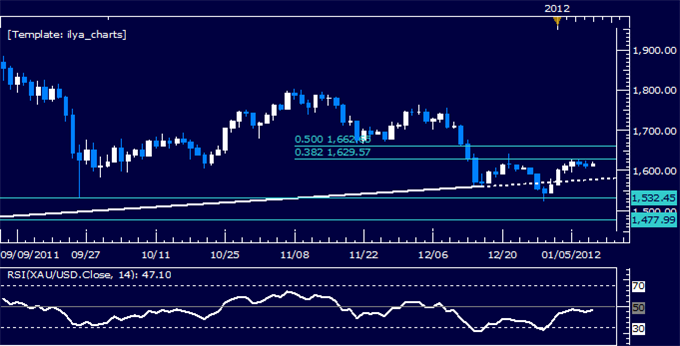 As with gold, silver is enjoying a bounce in European hours courtesy of US Dollar weakness, with more of the same likely over the coming 24 hours. The familiar range defined between support at 28.41 and resistance at 29.79 remains in place for now. A break lower targets 26.05 while a burst through resistance exposes the 31.00 figure. 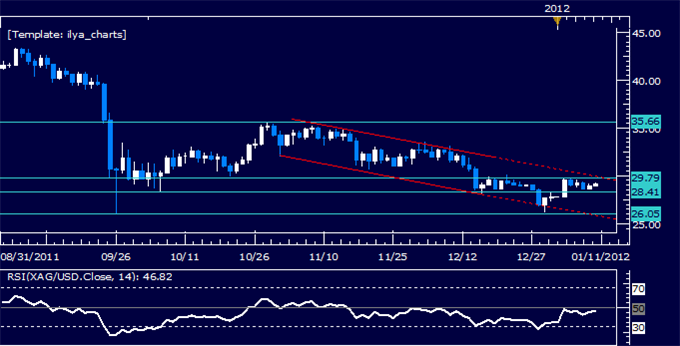