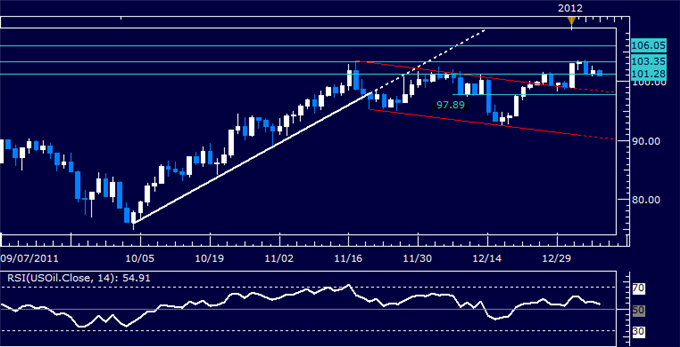 Crude oil prices are treading water in early European trade as risk sentiment trends – the key driver behind the WTI contract – anxiously await the outcome of a meeting between French President Nicolas Sarkozy and German Chancellor Angela Merkel in Berlin later today. The two leaders are expected to begin working out the details of the “fiscal compact” initially unveiled in early December and meant to contain the Eurozone debt crisis. The so-called “Franco-German axis” typically sets the agenda for the region as a whole, so the outcome of today’s meeting will be critical to lay the foundation for the next EU summit on January 30.

Regional leaders have given themselves until March to iron out the new fiscal arrangement, but a whopping €157 billion in debt is due to be rolled over in the interim, so EU policymakers’ ability to establish and managing positive expectations will prove critical in the months ahead to keeping a lid on bond yields, allowing Eurozone countries to refinance their obligations at as close to sustainable borrowing costs as possible. The first test of their ability to do so will come mere hours after the Merkel/Sarkozy meeting at a French bond auction. Paris is set to sell up to €7.7 billion in 91-, 182- and 364-day bills today and traders will size up average yield and bid-to-cover readings following the auction as a snap assessment of solvency fears after what will at least try to sound like reassuring rhetoric from the French and German leadership.

On the technical front, prices are testing support at 101.28, with a break below that clearing the way for a challenge of the 100.00 figure and 97.89. Near-term resistance remains at 103.35, the November 17 high. A return to bullish momentum that takes out this barrier on a daily closing basis initially exposes 106.05.

Gold prices are trading marginally higher overnight, stoked by US Dollar weakness as the benchmark currency succumbs to an upswing in risk appetite ahead of the Merkel/Sarkozy summit. A relatively supportive outcome may continue to drive gains over the short term as the greenback retraces some of its recent gains but the larger picture remains bearish, particularly after St. Louis Fed chief James Bullard poured cold water on QE3 expectations over the weekend.

Sizing up the chart setup, put in a bearish Hanging Man candlestick below resistance at 1629.57, the 38.2% Fibonacci retracement level, hinting a move lower is ahead. Initial support lines up at 1576.35, a long-term rising trend line based from October 2008. Alternatively, a reversal higher through the 38.2% level exposes the 50% Fib at 1662.65. 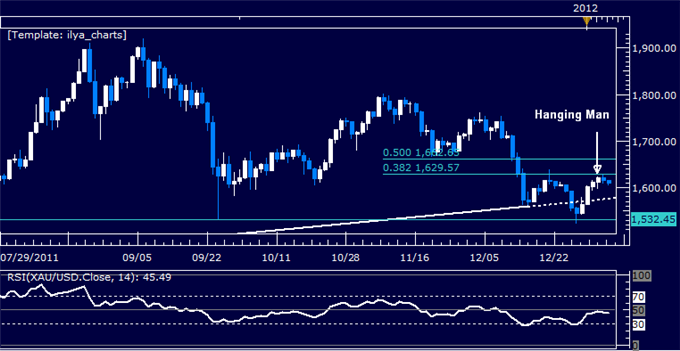 As with gold, silver is enjoying a bounce in European hours as hopeful traders await the Merkel/Sarkozy summit and force down the safe-haven US Dollar. Likewise in line with its more expensive counterpart however, the overall trajectory seems to favor weakness over the weeks and months ahead as demand for alternative to fiat currency fades with QE3 bets. The familiar range defined between support at 28.41 and resistance at 29.79 remains in place for now. A break lower targets 26.05 while a burst through resistance exposes the 31.00 figure. 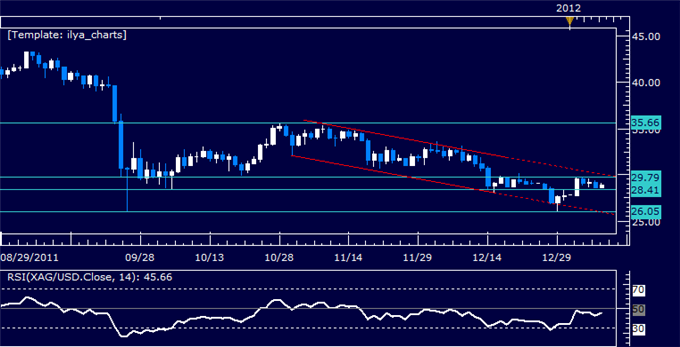