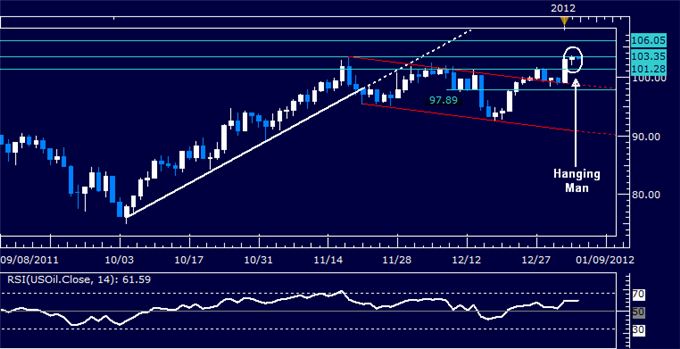 Crude oil prices appear firmly anchored to broad-based sentiment trends with the correlation between the WTI contract and the S&P 500 – a proxy for overall risk appetite – now at the strongest in over two months (on 20-day percent change studies). This suggests the path of least resistance favors weakness as futures tracking the equity benchmark slide over 0.5 percent in European trade.

Markets are turning jittery in anticipation of a French bond auction amid returning Eurozone debt crisis fears. Paris will sell €8 billion in 2021-2041 paper, with the outcome particularly interesting given rating agencies’ threats to downgrade the country’s AAA credit score (which would consequently compromise the AAA score assigned to the EFSF bailout fund) over recent months.

On the economic data front, all eyes are on the US ADP Employment reading as traders prepare for Friday’s all-important official jobs report. Expectations call for an increase of 178,000 in December compared with 206,000 recorded in the preceding month, alluding to a slowdown in hiring.The non-manufacturing component of the ISM survey may be a mitigating factor however, with forecastssuggesting service sector growth accelerated for the first in four months. Weekly inventory figures are also on tap.

On the technical front, prices put in a bearish Hanging Man candlestick below resistance at 103.35, the November 17 high, warning a double top may be in the works. Near-term support lines up at 101.28. Alternatively, a break higher exposes 106.05.

Gold prices are inching higher in Europe even as the US Dollar soars amid risk aversion, suggesting the yellow may be reclaiming a degree of its safe-haven credentials. Indeed, the positive correlation between gold and the S&P 500 peaked in early December and has gradually eased since then (though it remains significant at 0.61 on 20-day percent change studies).

At this time of transition, a clear short-term fundamental driver is tough to identify and the outlook is somewhat clouded. With that in mind, the overall bias for the coming months appears bearish as unwinding QE3 expectations weigh on demand for the metal as an inflation hedge.

Sizing up the chart setup, prices are testing support-turned-resistance at the bottom of a falling channel set from early November, with a break above this boundary exposing 1677.05. However, a candle in Star position hints a reversal lower may be brewing, although confirmation is absent for now. Near-term support lines up at 1574.72. 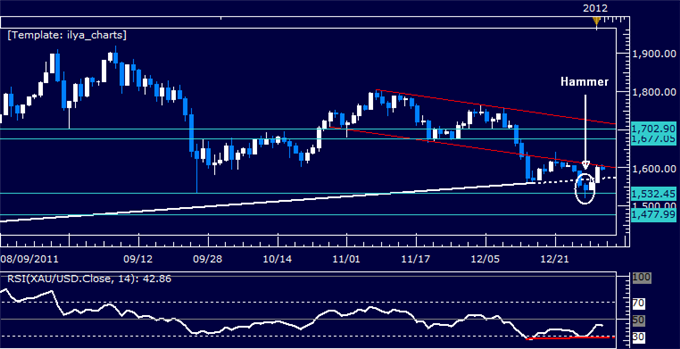 Correlation studies suggest silver is more sensitive to risk trends than its more expensive counterpart. Furthermore, a significant inverse relationship between the gold/silver ratio and the S&P 500 suggests the cheaper metal is likely to underperform amid risk aversion. Prices are pulling back from resistance at 29.79 eyeing initial support at 28.41. A break below this barrier exposes the September 26 low at 26.05. 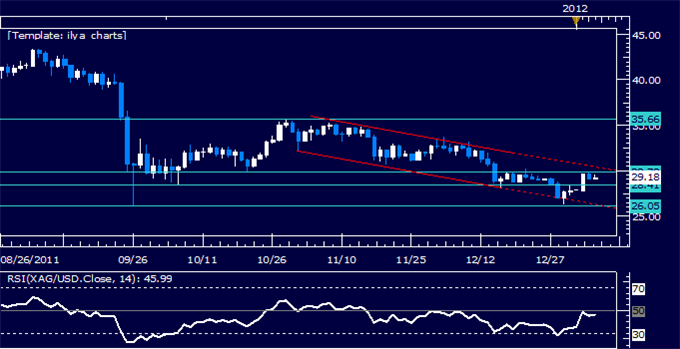