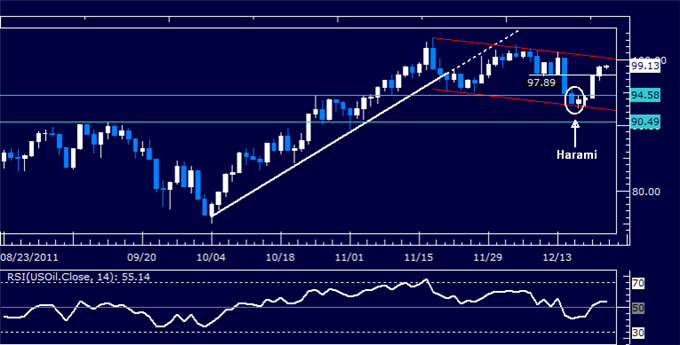 Crude oil prices continued to press higher yesterday after the DOE weekly inventory report showed stockpiles fell by 10.6 million barrels, marking the largest draw-down in over a decade. Continued gains are tipped ahead as S&P 500 trade higher, hinting at a broad-based recovery in risk-linked assets including the WTI contract. With that in mind, jittery sentiment trends may yet reverse as Eurozone debt crisis fears threaten to re-enter the spotlight.

ECB President Mario Draghi and BOE Governor Mervyn King are set to hold a joint press conference after a meeting of the European Systemic Risk Board (ESRB) against a backdrop of increasingly tight money markets as well as yesterday’s huge uptake at the ECB’s 3-year LTRO (indicative of cash shortages at regional banks). Investors will be on the lookout for ideas on how the EU’s top monetary authorities can ramp up cash provisions if credit markets continue to tighten, with a perceived lack of urgency on the part of policymakers opening the door to renewed risk aversion.

Prices took out support-turned-resistance at 97.89, with the bulls now poised to challenge the top of a falling channel set from the November 17 high, now at 100.18. Anything shy of a daily close above this barrier keeps the overall trend bias bearish. The 97.89 level has been recast as support. Final revision of third-quarter US GDP and December’s University of Michigan Consumer Confidence readings as well as weekly Jobless Claims data headline the data docket.

The overnight pickup in S&P 500 stock index futures suggests gold may find its way higher as a rise in risky assets dents safe-haven demand for the US Dollar, offering a de-facto lift to the yellow metal. As with oil however, much can change depending on the outcome of the Draghi/King press conference.

Prices put in a Shooting Star candlestick on a retest of resistance at the underside of a previously broken falling channel established from early November. The setup hints bullish momentum is running out of steam and a pullback is ahead. Initial support is seen at 1609.05, with a break below that exposing a long-term trend line dating back to late October 2008 at 1564.92. 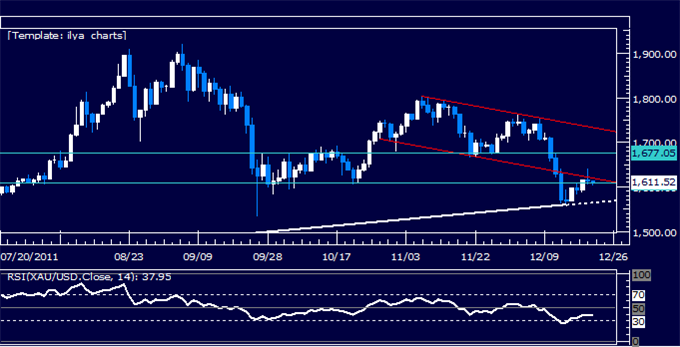 As with gold, the recovery in risk appetite being signaled in S&P 500 stock index futures bodes well for silver as the safe-haven US Dollar retreats but jittery and illiquid trading conditions mean a sharp reversal – particularly courtesy of Eurozone debt fears – may be just around the corner. Prices remain wedged between 28.41 and 29.79, with a break higher exposing rising trend line support-turned-resistance at 31.82. 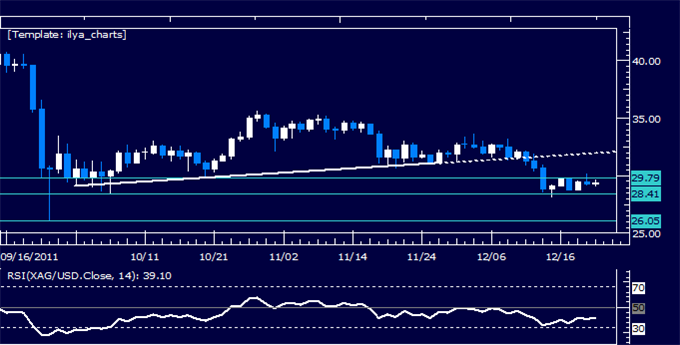