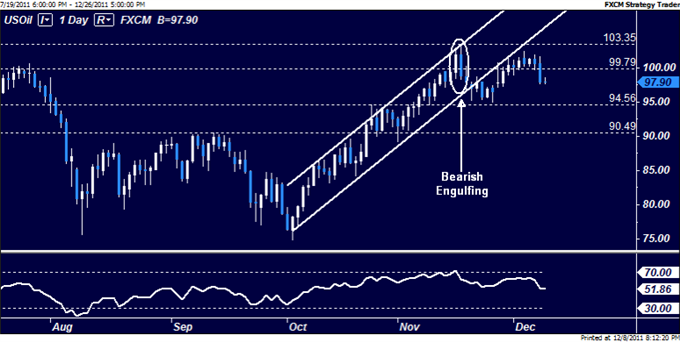 Crude prices tumbled yesterday after ECB President Mario Draghi set off an aggressive selloff across the spectrum of risky assets by saying the central bank would not circumvent treaties barring it from financing member countries’ debts and adding that policymakers don’t presently see a high risk of deflation. Both statements dashed hopes that the ECB was preparing to ramp up bond purchases if only EU leaders were able to secure agreement on substantive fiscal integration.

Needless to say, all eyes remain on Brussels where the second day of the EU leaders’ summit is underway. Sizing up the tone of negotiations so far, the sit-down seems likely to disappoint investors. An apparent disagreement between France and the UK scuttled treaty amendment efforts, making whatever emerges a Eurozone-centric intergovernmental effort. The remainder of the arrangement largely followed the familiar bold-sounding but vague EU formula.So far, the markets seem to be reserving judgment until the end of the summit, but unless policymakers deliver something substantively stronger than what has already emerged however, risk aversion seems likely to return in force.

On the technical front, prices broke through support at 99.79, exposing the next major downside barrier at 94.56. A break below this boundary targets 90.49. The 99.79 level has been recast as near-term resistance, with a push back above that seeing the next key upside junction at 103.35.

Similarly to oil, gold dropped the most in over two weeks yesterday as broad-based risk aversion stocked demand for the safe-haven US Dollar and pressured the yellow metal via its denomination in terms of the greenback. Needless to say, all eyes are on the final day of the EU leaders’ summit, with the outcome’s implications for risk sentiment trends likely to continue acting as the primary catalyst for price action into the week-end.

Sizing up the technical landscape, prices continue to consolidate below resistance at 1746.08, the 14.6% Fibonacci extension. Near-term support is loosely defined between 1711.13, the 23.6% level, and a rising trend line underpinning price action since late September (now at 1694.74). A break below the latter hurdle exposes the 38.2% Fib at 1654.44. 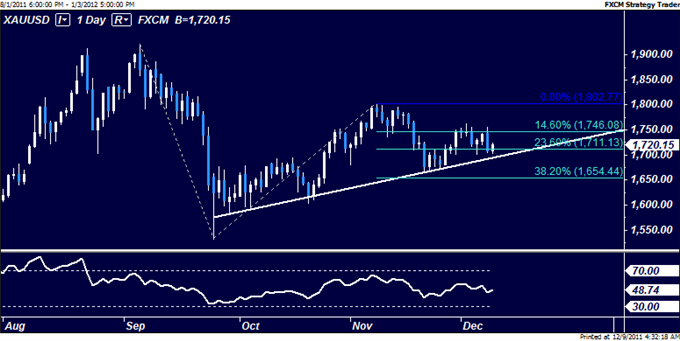 As with gold, silver is looking to the US Dollar as the transmission mechanism for broad-based risk sentiment trends, with all eyes on the conclusion of the EU leaders’ summit. Prices remain capped by range resistance at 33.04, with support at a rising trend line set from late-September (now at 31.02). A break below initial support exposes the 30.00 figure. Alternatively, a push through resistance exposes 35.35. 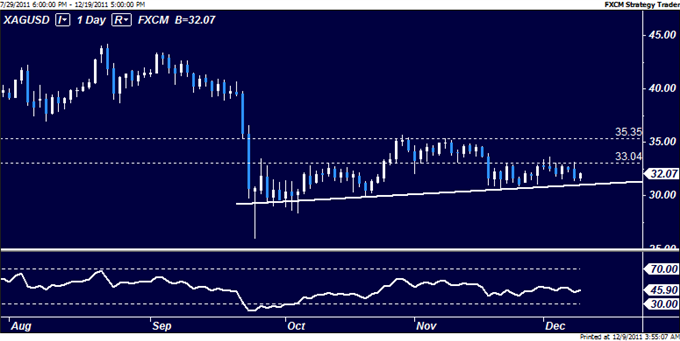