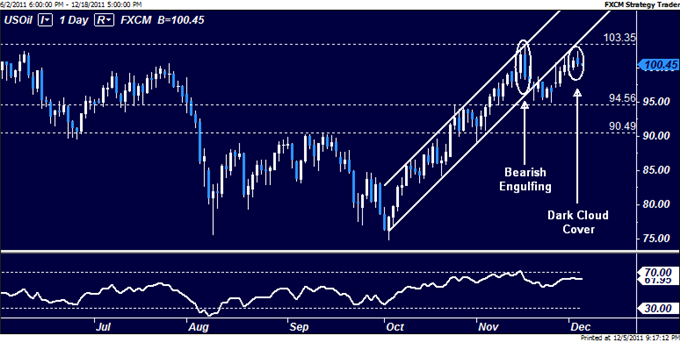 Financial markets continue looking for new guidance on the evolution of Eurozone debt crisis policy ahead of this week’s EU leaders’ summit. Yesterday’s Franco-German accord on a path to fiscal integration – which it is hoped will convince the ECB to ramp up bond purchases and weigh against regional borrowing costs in a de-facto trade of fiscal hawkishness for monetary dovishness – may stoke risk appetite over the near term. Needless to say, such an outcome bodes well for crude oil prices.

Markets didn’t get a chance to fully price in the accord’s announcement when it initially emerged, undermined by news that the S&P put 15 Eurozone countries including the six triple-AAA members on negative credit watch, with downgrades pending this week’s summit outcome. This ought not to change the landscape however, because the EU summit was already of existential importance for the currency bloc before the S&P added its two cents. Indeed, US stock index futures are inching deeper into positive territory as negativity after the initial S&P bombshell is unwound. This too may not prove lasting however as the Franco-German deal contains its share of flaws.

On the technical front, prices put in a Dark Cloud Cover candlestick pattern below resistance at 103.35 following a retest of a rising channel bottom established from early October, hinting a move lower is ahead. Initial support lines up at 94.56.

The advance in US stock index futures bodes well for gold, hinting prices may rise as traders abandon the safe-haven US Dollar and offer a de-facto lift to the yellow metal by way of its denomination in terms of the benchmark currency. As noted above however, sentiment trends remain fickle and may see a sharp reversal at a moment’s notice as traders continue to jump from headline to headline ahead of the EU leaders’ summit set to begin on Thursday.

As we suspected yesterday, prices moved lower following the formation of a Shooting Star candlestick below resistance at 1746.08, the 14.6% Fibonacci extension. Near-term support remains at 1711.13, the 23.6% level, a boundary reinforced by a rising trend line underpinning price action since late September (now at 1689.26). A break below the latter hurdle exposes the 38.2% Fib at 1654.44. The 14.6% level continues to act as immediate resistance. 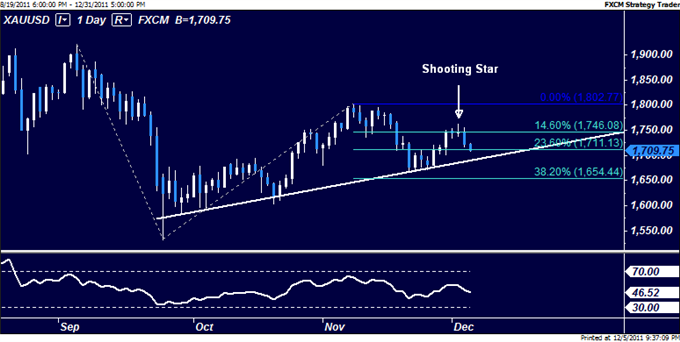 As with gold, silver is looking for direction cues from the US Dollar, with the near-term outlook seemingly favoring the upside amid a recovery in risk appetite. Prices remain capped by range resistance at 33.04, with support at a rising trend line set from late-September (now at 30.95). A break below initial support exposes the 30.00 figure. Alternatively, a push through resistance exposes 35.35. 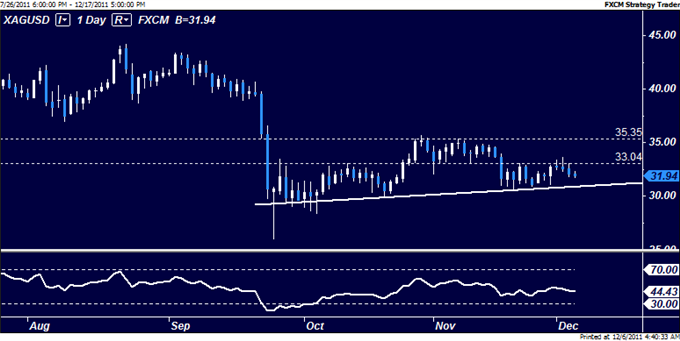