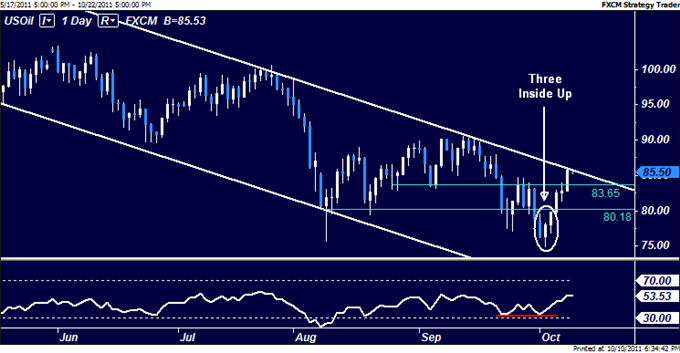 Crude oil continues to track broad-based risk sentiment trends, with prices still showing a strong correlation with the S&P 500. The WTI contract soared yesterday along with the benchmark stock index, but thin trading volumes – the lowest in three weeks – cast doubt on the conviction behind the move higher. Looking ahead, the outlook for risk sentiment (and thereby crude oil prices) rests on the outcome of a Slovakian parliamentary vote to ratify expanded powers granted to the EFSF bailout fund on July 21 and the third-quarter earnings release from Alcoa Inc.

Slovakia is the last Euro Zone country to vote on the EFSF reboot, with newswires reporting that the four parties that make up the ruling coalition didn’t reach agreement on passing the measures as of yesterday. The reforms require unanimous approval by members of the currency bloc, so just one “no” vote would through the process off-track and is likely to weigh against sentiment. Negotiations are set to resume at 7:00 GMT, with voting to begin at 11:00 GMT.

Meanwhile, Alcoa is expected to report that earnings per share fell to 0.227, the lowest since the fourth quarter of 2010. The aluminum producer’s stock is a bellwether of sorts, with earnings releases typically coming early in the reporting season and shares tracking closely the S&P 500, so signs of weakness that reflect the larger global economic slowdown may prove to weigh on confidence at large.

On the technical front, prices took out support-turned-resistance at $83.65 to challenge the upper boundary of a multi-month falling channel, now at $85.69. A break above this level would materially shift the bias from bearish to neutral, with a subsequent break above $90.50 needed to establish an overtly bullish tone. The $83.65 level has been recast as near-term support.

Gold rose along with risky assets as we suspected yesterday, with a recovery in sentiment weighing on the US Dollar and offering de-facto support to the yellow metal considering prices are denominated in terms of the safe-haven currency. Looking ahead, all eyes are setill on Wednesday's Federal Reserve release of minutes from September’s FOMC policy meeting.

As we discussed in our weekly gold forecast, the release will prove critical considering this was the Fed meeting where Ben Bernanke and company opted not to pursue a third round of quantitative easing, which subsequently weighed heavily on gold prices by undermining the metal’s appeal as an inflation hedge. Traders will be keen to gain insight into the central bank’s decision process to gauge whether another round of asset purchases remains a near-term policy option or if that has been largely abandoned for the foreseeable futureLast week’s congressional testimony from Fed Chairman Ben Bernanke suggests the latter scenario, but – as noted above – any insights into just how close the central bank came to opting for QE3 and what triggers could be set off to warrant it ought to prove telling nonetheless. In the meantime, the influence of risk trends as transmitted by the US Dollar is likely to remain the leading catalyst behind price action.

The technical landscape has been little changed for over a week. Prices remain locked in a choppy range between the 14.6% and 38.2% Fibonacci retracements at 1589.14 and 1680.78 respectively. A break below immediate support exposes the September 26 low at 1532.45. Alternatively, a push higher through the range top exposes the 50% Fib at 1726.60. 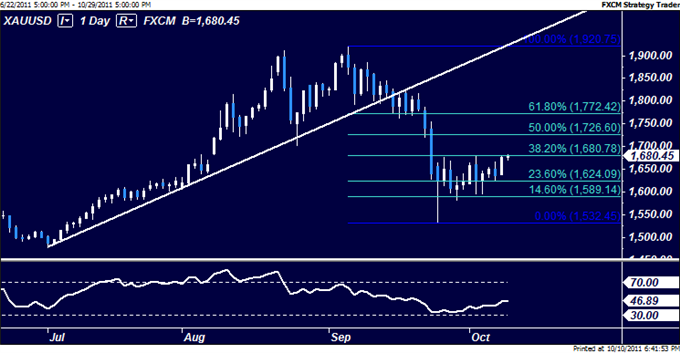 As with gold, silver is looking toward Wednesday's Federal Reserve’s meeting minutes release to guide price action as the entire precious metals complex responds to the perceived need for an alternative store of value implied by the likelihood of additional quantitative easing in the near term. Meanwhle, the threat of a return to risk aversion (as described in the crude oil section above) likewise takes aim silver in that it may boost the US Dollar anew. Prices remain perched above resistance-turned-support at $30.98, the 14.6% Fibonacci extension level, with the next upside barrier marked by the September 27 high at $33.51. Alternatively, a break of support exposes the 23.6% Fib at $29.42. 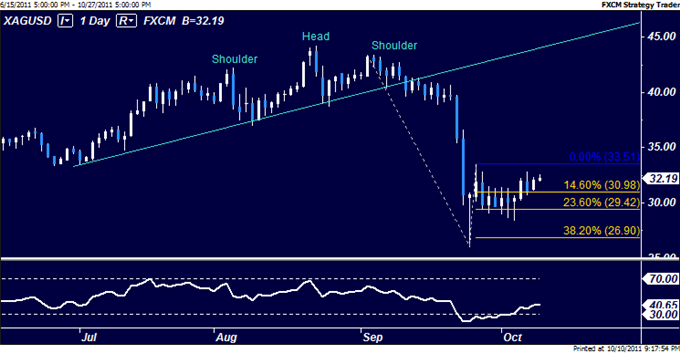