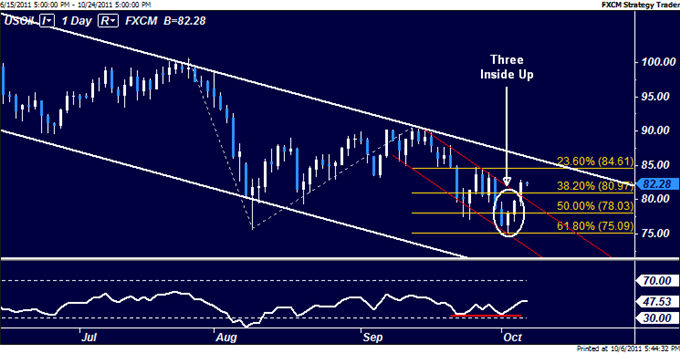 Crude oil continues to track broad-based risk sentiment trends, with prices still showing a strong correlation with the S&P 500. Needless to say, this puts the spotlight on the US Employment report due to cross the wires ahead of the opening bell on Wall Street. Expectations call for the world’s top economy to add 55,000 jobs in September, keeping the unemployment rate at 9.1 percent.

While a print in line with expectations would mark an improvement after hiring stalled in August, some leading indicators point to the possibility of a downside surprise. Indeed, the ISM non-manufacturing survey showed service-sector employment shrank in September. Since an overwhelming majority of US workers work in service industries (76.8 percent according to estimates published by the CIA), that ought to be a good reflection of what happened economy-wide.

Needless to say, a downside surprise is likely to weigh on risk appetite and sink the S&P 500 and the WTI contract alike (and vice versa). With that in mind, the technical picture seems to argue for gains after prices completed a bullish Three Inside UP candlestick pattern and took out resistance at 80.97, the intersection of the 38.2%Fibonacci extension and a falling channel top. The bulls now appear poised to test the 23.6% Fib at 84.61, with the 38.2% level recast as support.

Gold remains locked in a range between the 14.6% and 38.2% Fibonacci retracements at 1589.14 and 1680.78, respectively. The metal’s inverse correlation with the S&P 500 has faded, suggesting it has largely lost its safe-haven appeal. Prices do track closely with a Credit Suisse gauge measuring investors’ priced-in Federal Reserve monetary policy expectations, but those appear relatively fixed for the time being after Ben Bernanke laid out the central bank’s approach during Congressional testimony earlier this week.

On balance, this suggests that the yellow metal may prove most sensitive to the direction of the US Dollar over the coming 24 hours. Needless to say, gold is denominated in terms of the greenback, so the impact of the US jobs report on risk appetite and thereby on the safe-haven currency promises to indirectly co-opt the metal into sentiment-driven trade. A break below immediate support exposes the September 26 low at 1532.45. Alternatively, a push higher through the range top exposes the 50% Fib at 1726.60. 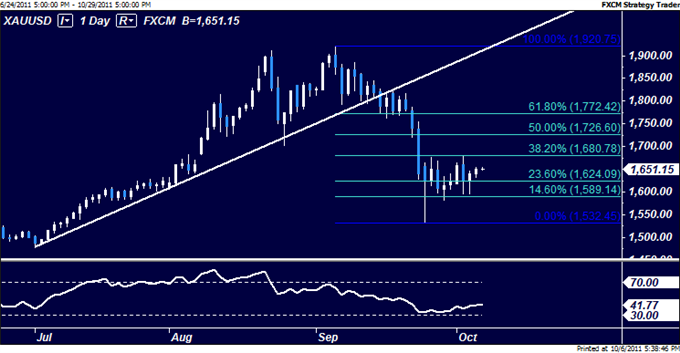 As with gold, silver finds itself indirectly under the influence of risk appetite trends ahead of the US jobs report, with the Dollar acting as a transmission mechanism. Prices broke above resistance at 30.98, the 14.6% Fibonacci extension level, exposing the September 27 high at 33.51. The 14.6% Fib has been recast as near-term support. 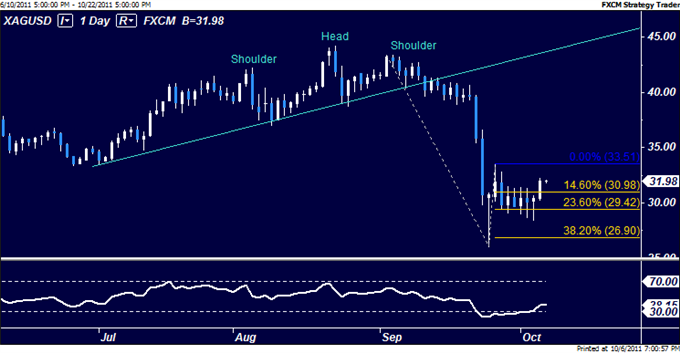