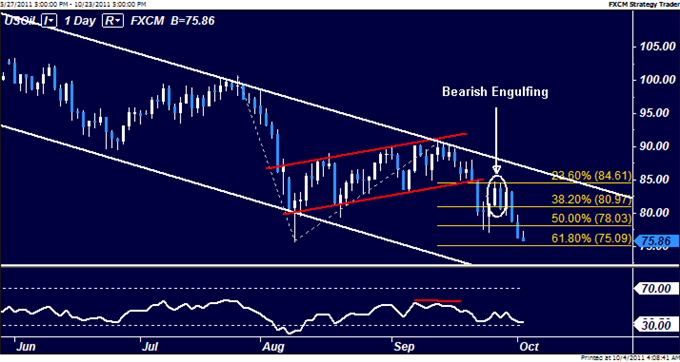 Crude Oil to Fall with Stocks, Gold Looks to Bernanke for Direction

Crude oil prices remain on the defensive, with the WTI contract following the broad-based selloff across the spectrum of risky assets after a summit of EU finance ministers in Luxembourg offered no meaningful progress on resolving the regional bloc’s sovereign debt crisis. Indeed, policymakers seemed to introduce more uncertainty into the picture with an apparent renegotiation of Greece’s second bailout underway.

Looking ahead, S&P 500 stock index futures point sharply lower ahead of the opening bell on Wall Street, arguing for continued selling as North America comes online. Congressional testimony from Federal Reserve Chairman Ben Bernanke headlines the economic calendar as he speaks on the outlook for the US economy, an ordeal likely to bring somber justification for “Operation Twist” announced at the last policy meeting. US Factory Orders data and the preliminary set of weekly inventory figures from API are also on tap.

Gold seemed to reclaim a hair of its luster as a safe-haven over recent days, rising with rising sovereign stress in the Euro Zone, but gains may prove fleeting as the spotlight turns to Ben Bernanke. The Fed Chairman is likely to paint a dour image of the US economic recovery as the backdrop for his decision to set a firm time frame for keeping rates at ultra-low levels and introducing a reshuffling of maturities on the central bank’s balance sheet.

Most importantly for gold will be any indication that an expansion of its securities holdings is still on the table, an outcome is likely to send the metal higher. The Fed seems to have conspicuously strayed away from what can be understood to be “QE3” however, and affirmation of the same going forward will probably weigh on gold prices anew. 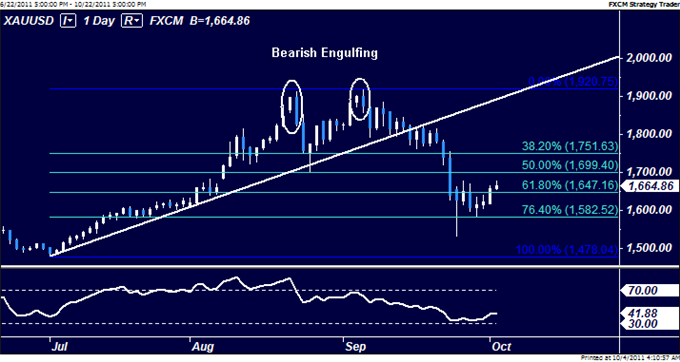 As with gold, silver will be most concerned with the outcome of Ben Bernanke’s remarks before Congress. On the technical side of things, prices remain wedged the 23.6% and 14.6% Fibonacci extension levels at $29.42 and $30.98 respectively. A break higher targets $33.51 – the September 27 high – while a move through current support exposes the 38.2% level at $26.90. 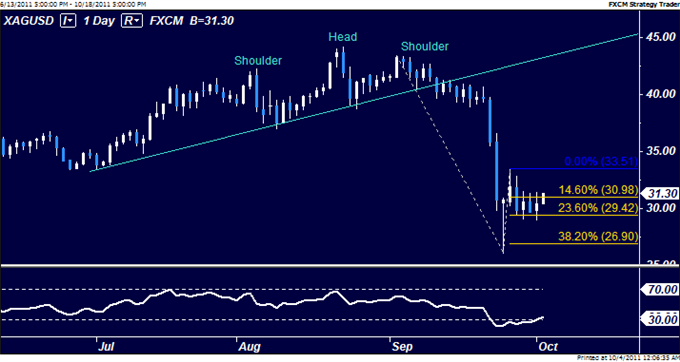