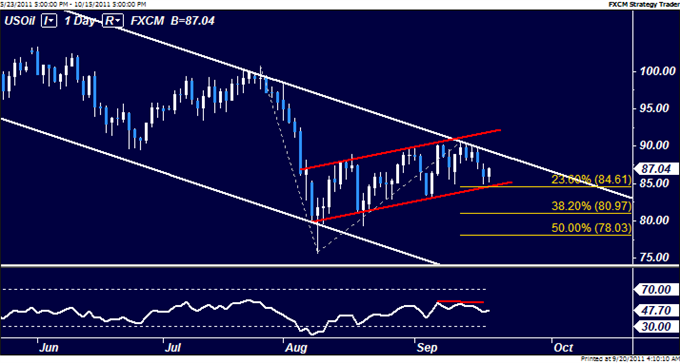 Crude prices remain closely correlated to the S&P 500, with strong gains in futures tracking the benchmark stock index ahead of the opening bell on Wall Street corresponding with gains in the WTI contract and pointing the way higher in North American trade. Augusts’ US Housing Starts and Building Permits figures headline a quiet day for economic data, with a second consecutive month of losses expected on both fronts. The preliminary API set of weekly inventory figures is also on tap.

The spotlight is likely to focus on the Federal Reserve however as policymakers begin a two-day meeting of the rate-setting FOMC. Current optimism likely centers on hopes that Ben Bernanke and company will unveil another round of aggressive stimulus, an outcome we see as unlikely, suggesting the upswing is a corrective affair before selling resumes anew.

The technical picture seems to reinforce the case for forthcoming losses. Prices found interim support above $84.61, the intersection of the 23.6% Fibonacci extension and the bottom of a Flag chart formation, with resistance lining up at a channel top set from early May. Broadly speaking, the Flag setup points to bearish continuation, with the resumption of the down move confirmed on a break below the pattern’s bottom.

The upswing in S&P 500 futures would be expected to point the way lower for gold prices, and yet the metal is ticking higher before the trading open in New York. The disparity seems to be attributed to the focus on the outcome of the FOMC policy meeting, with hopes for further stimulus translating into renewed demand for gold as an alternative store of value.

A major directional breakout seems unlikely until Wednesday when the Fed unveils the outcome of the sit-down, but the technical picture continues to argue for a double top below the $1900/oz figure marked by a pair of Bearish Engulfing candlestick patterns. Near-term support lines up in the $1702.90-1745.25 range, while resistance is found at a falling trend line connecting major highs since the September 6 swing top (now at $1805.85). 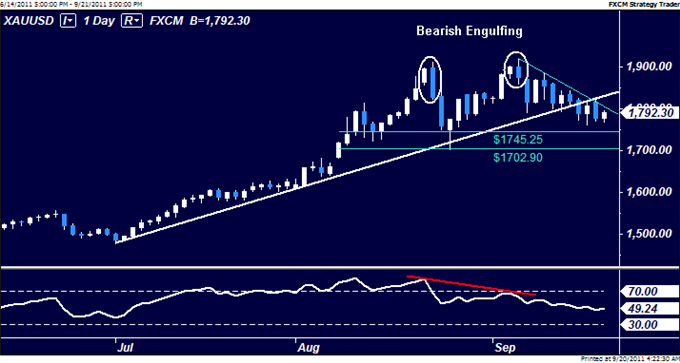 As with gold, silver seems to be backing away from trading as a strict safe haven asset ahead of the Federal Reserve monetary policy decision, with the metal’s fate unlikely to be decided until the announcement crosses the wires on Wednesday. In the meantime, interim support lines up at $38.73, while Fibonacci extension resistance stands at $40.01, $40.65 and $41.29. 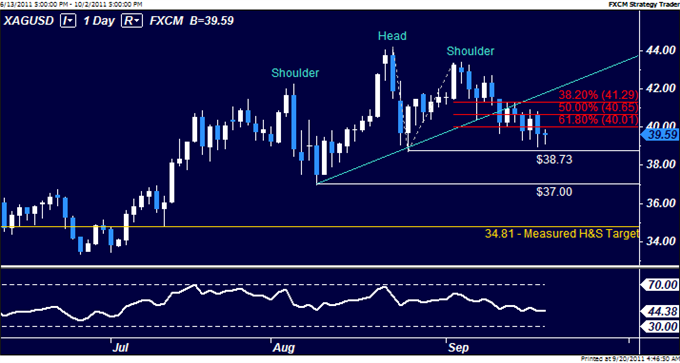