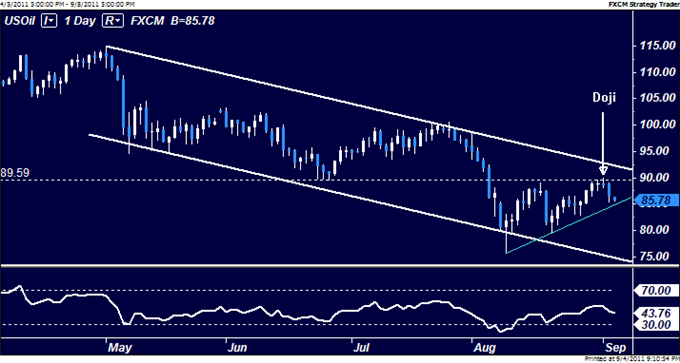 Crude oil are under pressure along with the spectrum of sentiment-driven assets as European shares sink, following the defensive tone noted in Asia where downward pressure after Friday’s dismal US jobs report was compounded by news that German Chancellor Angela Merkel’s CDU party suffered its fifth regional electoral defeat of the year, this time in Mecklenburg – Western Pomerania.

Traders are interpreting the result as an indication for waning German support for further Euro Zone debt crisis bailout efforts, pointing to increased instability. US and Canadian markets are closed for the Labor Day holiday today, meaning thin liquidity stands to compound volatility and may produce an exceptionally bitter start to the trading week.

As we suspected, prices moved lower after putting in a pair of Doji candlesticks below support-turned-resistance at $89.59, the June 27 wick low. Initial support from here stands at a rising trend line connecting major lows since August 9, now at $84.80. Resistance remains at $89.59.

Gold is thriving as risk aversion sweeps financial markets. As we discussed in our weekly forecast, the yellow metal is positioned to gain over the near term whether or not the current panic transforms into growing hopes for additional monetary stimulus, from the Federal Reserve and otherwise.

Indeed, if investors continue dumping risky assets, gold has scope to continue higher as a vehicle for capital preservation amid collapsing “paper” assets. Alternatively, if another week of disappointing data and an increasingly dovish lean from G10 central bankers underpins risk appetite as traders become convinced monetary support is on the way, gold is likely to remain well-supported as a tangible store-of-value alternative to increasingly abundant fiat currencies.

Prices took out resistance at $1877.15 – the 76.4% Fibonacci extension level – only to run into a barrier at rising trend lie set from the swing lows visited two weeks ago. Renewed upward momentum sees trend line resistance at $1902.73, a level closely followed by the measured Fib extension target at $1908.38. Alternatively, a break below current support exposes the 61.8% Fib at $1857.83. 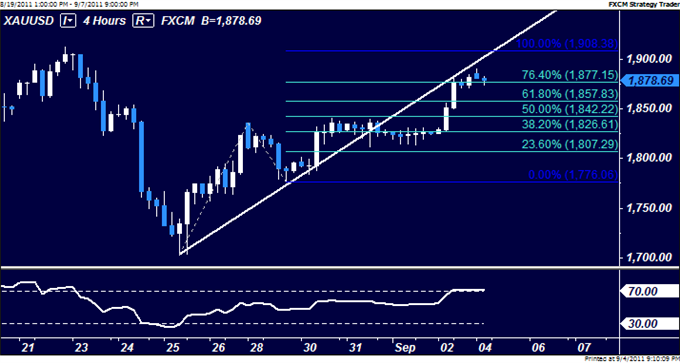 While silver is mirroring its more expensive counterpart in its ability to capitalize on jittery financial markets, its inferior liquidity and generally more speculative trading profile is likely to see it underperform gold. Indeed, the gold/silver ratio continues to show a significant inverse relationship with the S&P 500, suggesting the cheaper metal lags at times of risk aversion. On the technical front, prices took out resistance at the Andrew’s Pitchfork midline and now threaten to challenge $37.53, the August 9 closing low. Beyond that, pitchfork top resistance stands at $45.91. 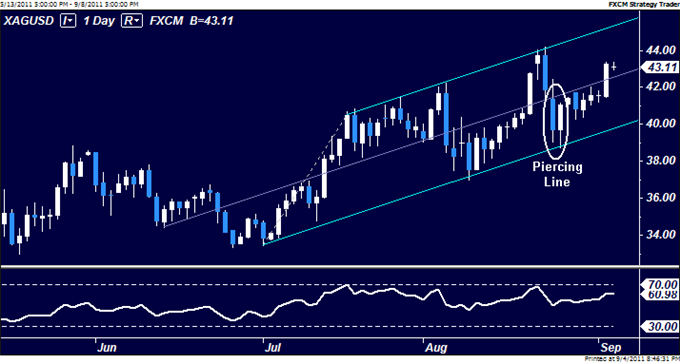