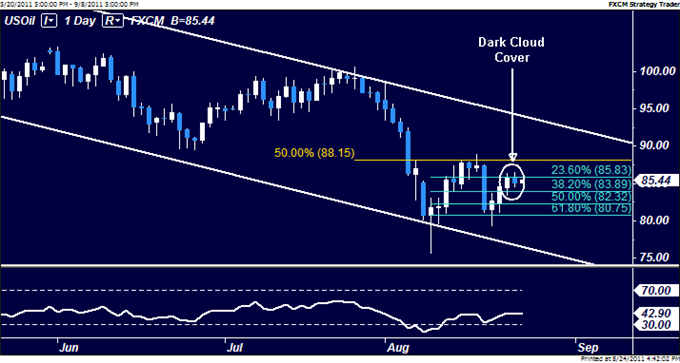 Crude prices decoupled from equity markets yesterday, pulling back from resistance the 23.6% Fibonacci retracement level ($85.83) to form a bearish Dark Cloud Cover candlestick pattern – hinting more losses are ahead – even as the S&P 500 pushed higher. Indeed, the WTI contract declined even as the Department of Energy reported that crude inventories unexpectedly dropped last week. Further still, US economic data beat expectations, with US Durable Goods surprising smartly to the upside, which ought to have bolstered the outlook for oil demand and driven prices higher.

Needless to say, this leaves investors puzzled as to why prices fell, and the only reasonable explanation that seems to present itself is the steady downward drift in trading volume over recent days in crude oil and the S&P 500 alike. Needless to say, much of the outlook for the months ahead hinges squarely on what is said by Federal Reserve Chairman Ben Bernanke at the Jackson Hole Symposium on Friday, with many breathlessly hoping for the unveiling for another round of stimulus to underpin sagging growth. Faced with such a clear inflection point in the global macroeconomic landscape, a large crowd of investors have apparently taken to the sidelines, draining market liquidity and producing erratic price action that is subsequently difficult to explain.

Looking ahead, more of the same is likely until the Fed Chairman finally utters the words everyone has been waiting for and – whether stimulus is announced or not – allows the markets to digest what is to come in the months ahead, thereby finally expressing some directional conviction. In the meantime, initial support is $83.89 at the 38.2% Fib, while a break above current resistance exposes 50% retracement of the decline from the drop from the August 27 swing high at $88.15.

Yesterday we discussed the conflict between the fundamental drivers of gold demand against the backdrop of Ben Bernanke’s upcoming speech in Jackson Hole, Wyoming. Indeed, if the Fed chairman announces new stimulus measures, this will be good for risk appetite and should drive gold lower as safety-seeking capital reverses course. However, it will also stoke inflation fears, which ought to underpin the metal as an inflation hedge. Conversely, no further stimulus presents the identical conflict in reverse, with an anchored price growth outlook negating the need for an inflation hedge but a return to risk aversion stoking safe-haven flows into the metal.

Faced with the uncertainty of what Mr Bernanke actually unveils, investors appear to have looked upon gold prices hovering near record highs at a dizzying $1900/oz and decided to take some profits lest either of the outcomes to the Jackson Hole speech prove to bode ill in the months ahead. Needless to say, this has produced an aggressive selloff over recent days, mirrored by a dramatic reversal in investor demand as evidenced by a sharp decline in gold ETF holdings.

With all this said, asking for follow-through in current conditions is clearly less than wise, and the continuity of the current move is far from assured over the coming 24 hours. Prices are now testing below support at $1746.19 having formed a formidable Bearish Engulfing candlestick pattern, the 38.2% Fibonacci retracement level, with a break below that exposing the 50% level at $1695.05. 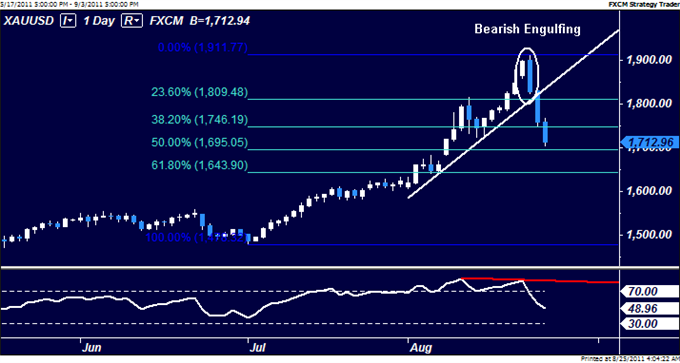 In a similar setup to gold, prices put in an aggressive Bearish Engulfing candlestick pattern below Andrew’s Pitchfork resistance and are now testing through support at $39.75, the 61.8% Fibonacci retracement level. The logic at work appears to be the same as that which is driving silver’s more expensive counterpart. Critical support stands at $38.70, the intersection of the pitchfork bottom and the 76.4% Fib, with a break below that changing the near term bias to favor losses. 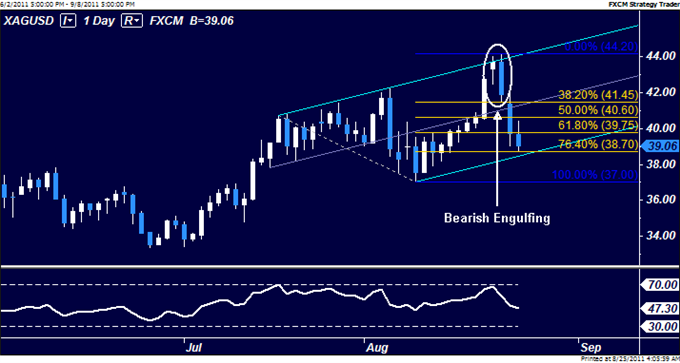