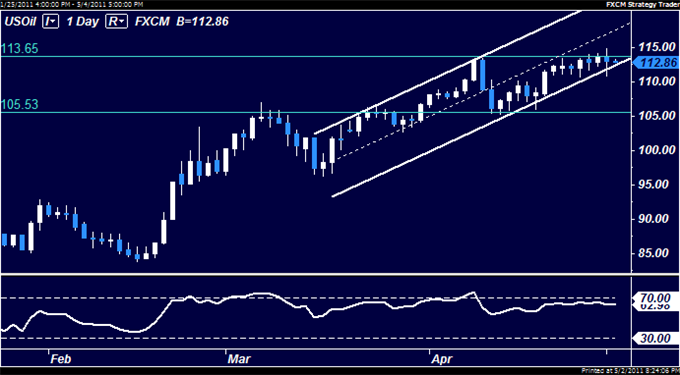 Prices continue to tread water near the $114 figure, with daily close above $113.65 clearing the way higher for run past the $115 level toward resistance at the midline of a rising channel set from mid-March (now at $117.60). The channel’s bottom stands as near-term support, with a push lower opening the door for significant downside seeing the first major barrier at $105.53.

Risk sentiment trends remain in focus, with the correlation between the WTI contract and the MSCI World Stock Index now the strongest in nine months on 20-day studies. On balance, this likely points the way higher as traders rush to capitalize on the opportunity to fund purchases of higher-yielding assets by borrowing cheaply in US Dollars after the Federal Reserve defined the expiration date on such trades last week having firmly asserted that QE2 will indeed expire in June. With that in mind, S&P 500 stock index futures are tracking lower overnight, although it remains to be seen if the negative tone carries through into European hours considering contracts tracking the FTSE 100 are pointing squarely in the opposite direction.

Yesterday’s report of the death of Osama bin Laden at the hands of US special forces adds a wild-card element to the equation. Indeed, it remains unknown when and if terrorist forces will launch a retaliation campaign, which could compound already simmering tensions in the Middle East and renew supply concerns. US Factory Orders as well as preliminary API weekly inventory figures headline the economic calendar over the coming 24 hours.

Prices testing the top of a rising channel that has confined trading for the past year, with the daily chart showing a bearish Dark Cloud Cover candlestick pattern (not shown) and hinting a move lower is ahead. Relative strength studies are their most overbought since mid-October when the last run higher gave way to consolidation, hinting a similar outcome may materialize again. Initial support stands at the channel’s midline, now at $1491.45.

Short-term correlation studies suggest inflation expectations remain the best-defined driver of the yellow metal, with prices still showing a robust link with breakeven rates (the spread between yields on inflation-indexed and regular US Treasury bonds of equivalent maturity). While last week’s FOMC announcement erred on the dovish side of things, the apparent conviction behind policymakers’ decision to end QE with the second round due to expire to in June opens the door to speculation about rising yields in the very near future. This is likely to weigh on inflation bets, keeping the yellow metal on the defensive. 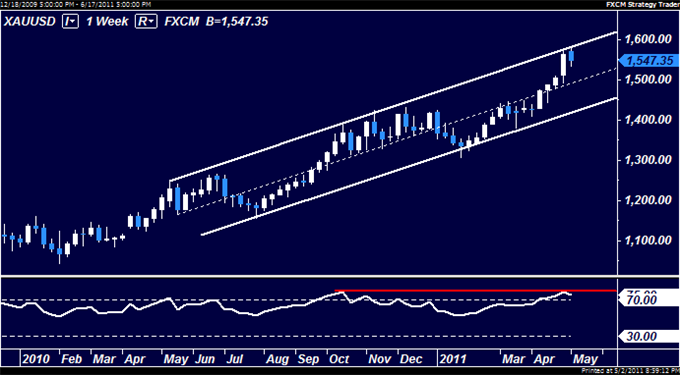 Prices are testing the bottom of a rising channel set from late January, now at $43.76. A break lower from here initially exposes $41.96. Near-term resistance lines up at $46.70, the channel’s midline.

The correlation between the cheaper precious metal and its more expensive counterpart dropped off significantly while the gold/silver ratio jumped highest in a month on Monday, issuing the largest daily increase in close to a year. The slump came after the CME raised trading margins for futures contracts on the metal by 12 percent. 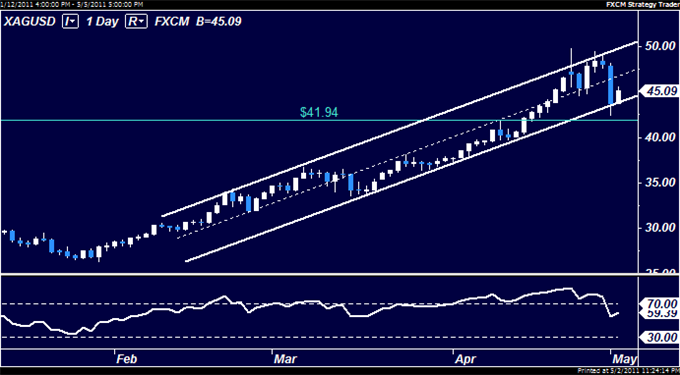