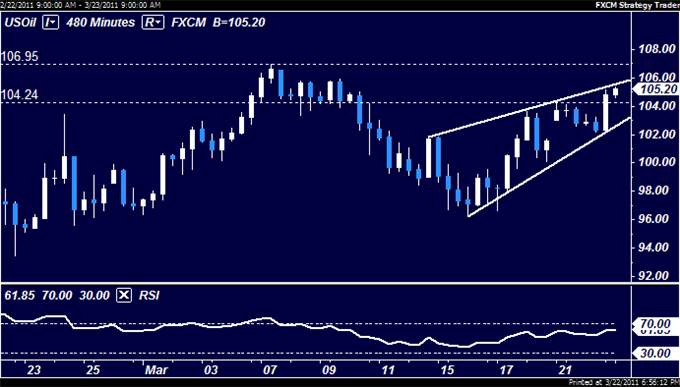 Commentary: The escalating conflict in Libya continues to pressure crude oil prices higher, with US Admiral Samuel Locklear promising further airstrikes against the forces of embattled leader Muammar Qaddafi in the “coming hours and days”. As we have noted previously, the UN intervention sets an important precedent for future Western involvement in similar scenarios, particularly as protesters face a harsh response in Bahrain. In turn, that uprising is seen by many as a trial run before something similar is attempted in Saudi Arabia – the world’s top oil exporter – and the path for the WTI contractappears to lead higher as long as the possibility that the Kingdom could end up looking like Libya remains alive. The forthcoming reconstruction effort in Japan promises to compound upward pressure from the demand side of the equation as the island nation substitutes traditional energy sources to pick up the slack from its earthquake-damaged nuclear sector. Expectations of a second consecutive drop in weekly DOE inventory figures bolster the case for an upside scenario.

Technical Outlook: Prices have taken out resistance at $104.24 to meet trend line resistance just below the $106.00 figure. A break higher above this juncture exposes the March swing top at $106.95. Alternatively, a drop back below $104.24 exposes trend line support at $102.50.

Commentary: Opposing forces are battling for control over gold price action as sentiment looks for direction. One hand, the US Dollar’s role as a safe haven puts gold on a path parallel stock markets, with bouts of risk aversion sending the greenback higher to produce de-facto downward pressure on the yellow metal. On the other, lingering uncertainty about a host of issues – from the impact of Japan’s Tohoku earthquake on global growth to the crisis in Libya – makes gold attractive for safety-seeking investors looking for a tangible store of value amid the turmoil. On balance, a steady recovery in ETF holdings suggests the path of least resistance leads higher, although a short-term pullback is not out of the question while as the current tug-of-war is resolved.

Technical Outlook: Prices are stalling below falling trend line resistance that has capped the upside throughout March. A bearish Shooting Star candlestick formation hints the path of least resistance leads lower, with initial support lining up at $1412.54. Alternatively, a break above the aforementioned trend line exposes $1444.85. 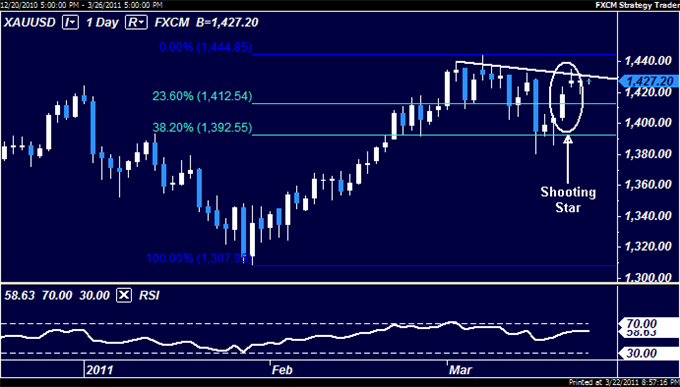 Commentary: The recent bout of US Dollar weakness put silver prices on a parallel track with risk appetite trends (as tracked by the MSCI World Stock Index). Unlike gold however, ETF holdings have leveled off over the past week and are starting to drift lower, hinting silver may begin to underperform its more expensive counterpart. Indeed, the gold/silver ratio stands just off a record low and well below its long-term average, reflecting silver’s aggressive dominance since mid-2010 and suggesting a period of correction is reasonable.

Technical Outlook: Prices put in a bearish Hanging Man candlestick following a retest of support-turned-resistance at a rising trend line set from the lows in late January, hinting a pullback is ahead. The $34.00 figure continues to act as near-term support. 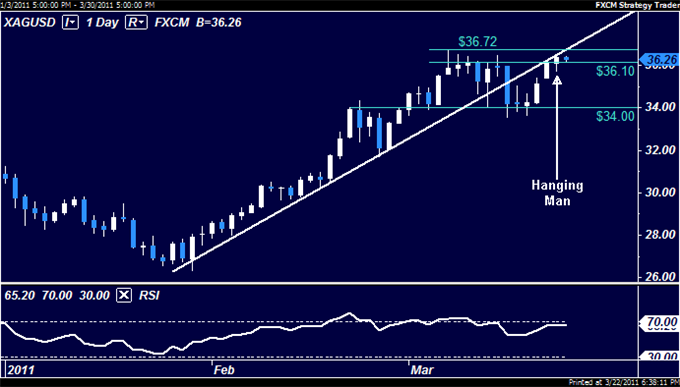