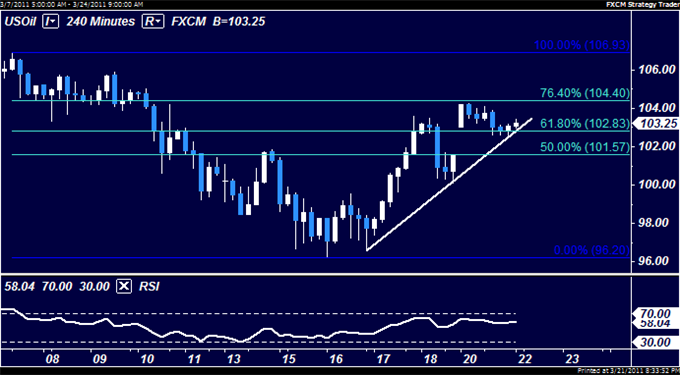 Commentary: Crude prices pushed back above the $102 figure as the escalating conflict in Libya continued to send jitters through the markets. A new phase of the crisis is unfoldingas the US, UK and France step in militarily to underpin the rebellion against embattled leader Muammar Qaddafi. The action sets an important precedent for future Western involvement in similar scenarios, particularly as protesters face a harsh response in Bahrain. In turn, that uprising is seen by many as a trial run before something similar is attempted in Saudi Arabia, the world’s top oil exporter, and the path for the WTI contractappears to lead higher as long as the possibility that the Kingdom could end up looking like Libya remains alive. Preliminary inventory figures from the American Petroleum Institute headline the calendar over the coming 24 hours.

Commentary: Gold seems to be breaking away from the safe-haven role it had occupied over recent weeks, with prices carving out a formidable positive correlation with the MSCI World Stock Index (a proxy for underlying risk appetite) over the past week. The relationship likely owes to the move lower in the US Dollar, which has de-facto bolstered the yellow metal. Perhaps most significantly, ETF holdings have been on the rebound for the past month having fallen precipitously since peaking in late December, hinting investment demand is turning increasingly healthy amid lingering uncertainty about the situation in Japan as well as the Middle East.

Technical Outlook: Prices put in a bearish Shooting Star below resistance at a minor falling trend line, hinting a push lower may be ahead (although confirmation is required on a down close to the current candle). Initial support lines up at $1412.54. Alternatively, a break above the aforementioned trend line exposes $1444.85. 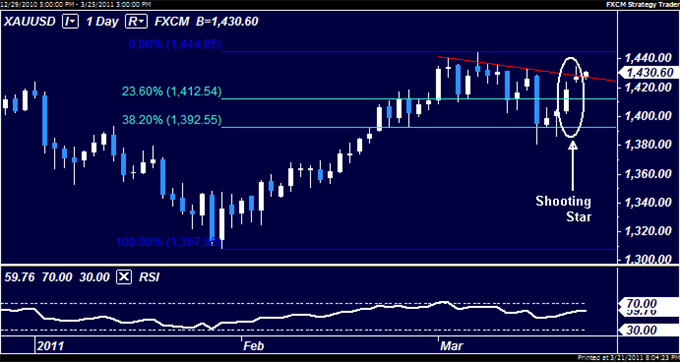 Commentary: As with gold, the recent bout of US Dollar weakness has put silver on a parallel track with risk appetite (as tracked by the MSCI World Stock Index). Unlike its more expensive counterpart however, ETF holdings have leveled off over the past week having moved aggressively higher from the low in early February, hinting silver may underperform gold over the near term. The gold/silver ratio stands at a record low and well below its long-term average, reflecting silver’s aggressive dominance since mid-2010 and suggesting a period of correction is indeed reasonable.

Technical Outlook: Prices rebounded from the $34.00 figure to retest support-turned-resistance at a rising trend line set from the lows in late January. A break though the $36.10-36.72 region clears the way for a push to new 30-year highs. The $34.00 level continues to act as near-term support. 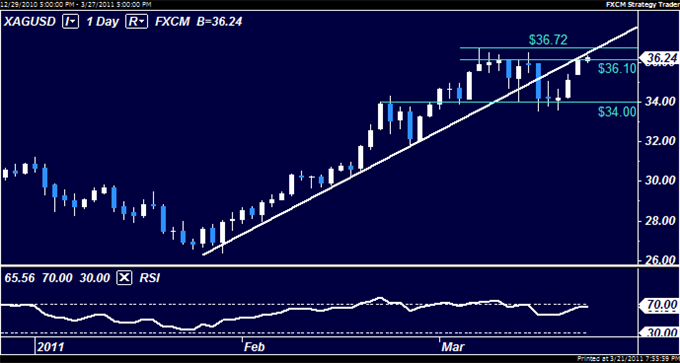