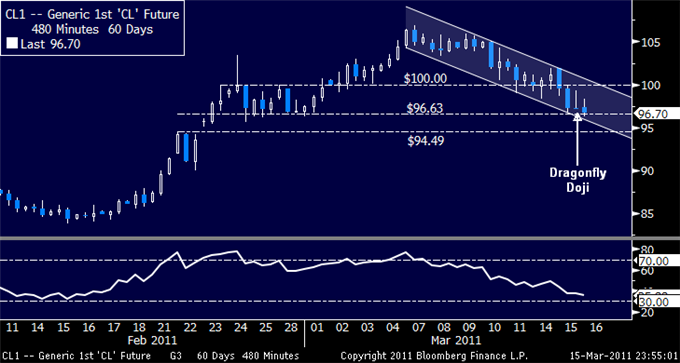 Commentary: Crude prices declined yesterday as Japanese refining capacity remained largely offline in the aftermath of the Tohoku earthquake and subsequent tsunami, but the makings of a rebound appear to be emerging. Tensions in the Middle East threaten to jump back into the forefront as Gulf Cooperation Council (GCC) troops begin putting down unrest in Bahrain, where mostly Shiite protesters (allegedly egged on by Iran) are pitted against a Sunni government. The outcome of the situation is critical in that Bahrain is a microcosm of what could happen in neighboring Saudi Arabia – the world’s largest oil exporter. The nascent Saudi protest movement is centered on the oil-rich and Shiite-dominated regions along the Persian Gulf and their qualms with the regime closely mirror those in Bahrain. Furthermore, the GCC force is dominated by Saudi forces, hinting that whatever happens in the island nation can be used as a close approximation for what is to be expected in the Kingdom. Upward pressure may also emerge following the release of US Department of Energy inventory figures, which are expected to show stockpiles grew at a slower pace in the five days through March 11 than in the preceding week. Meanwhile, the situation in Japan remains highly fluid and the recent moderation in news flow can be interrupted at a moment’s notice, threatening another bout of knee-jerk volatility.

Technical Outlook: Prices put in a bullish Dragonfly Doji candlestick above support at $96.63, a level reinforced by the bottom of a falling channel set from the swing top set earlier this month. A rebound initially targets the $100/barrel figure. Alternatively, renewed selling through immediate support exposes $94.49.

Commentary: Sentiment trends have steadied a bit after yesterday’s brutal selloff and gold prices are reflecting the cautious quiet, holding steady after yesterday’s decline as the US Dollar surged on the back of safe-haven demand. Stock index futures are in consolidation mode overnight, making it difficult to establish a clear directional bias, but a corrective rebound seems plausible in the absence of a catalyst spurring renewed risk aversion. That seems to be a tall order however considering the unfolding situation in Bahrain, the possibility of a flare-up in Euro Zone sovereign risk and the ever-present danger of renewed negative news flow from Japan. On balance, the situation remains highly unstable and prone to a sharp pickup in volatility.

Technical Outlook: Prices found interim support at $1392.73 – the 38.2% Fibonacci retracement of the advance from January’s lows – with a rebound set to target the 23.6% level at $1412.69.Alternatively, renewed bearish momentum through immediate support clears the way for a move lower to $1376.60. 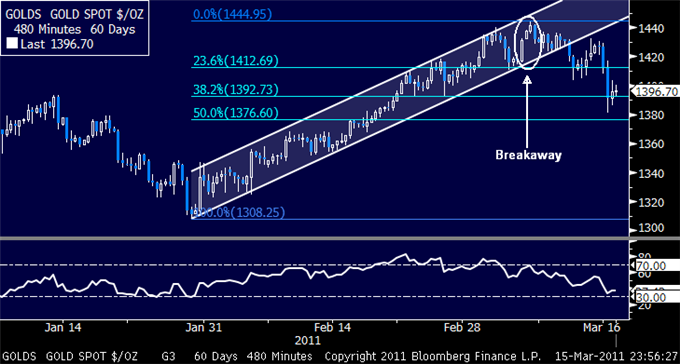 Commentary: The bottom line for silver mirrors that of gold, with a variety of risk-averse scenarios threatening to interrupt the current quiet. ETF holdings climbed to a record high yesterday, hinting at upward pressure assuming another safety-driven surge in the US dollar does not undermine the bulls.

Technical Outlook: Prices are showing a bullish Inverted Hammer at support marked by the $34.00 figure, hinting a corrective upswing is ahead to retest support-turned-resistance at a rising trend line set from the lows in January (now at $35.31). Alternatively, a break lower exposes $31.78. 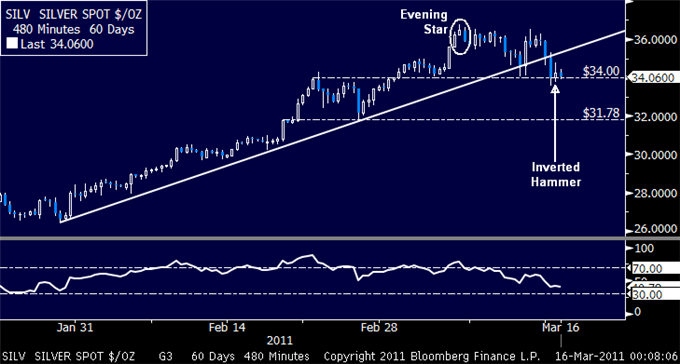