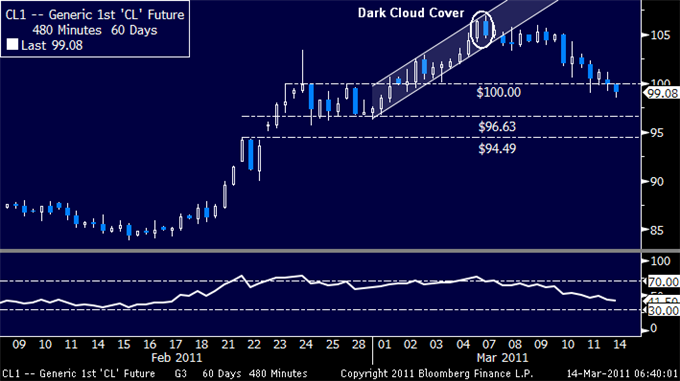 Commentary: Crude oil closed Friday with the first weekly loss in a month and prices continue today after Japan’s Tohoku earthquake – the worst in the island nation’s history – shuttered as much as a third of its refining capacity. Furthermore, Japan is the world’s third-largest oil consumer, and traders are reasonably concerned that any immediate headwinds to economic growth following the quake may prove to weigh on demand for the time being. Downward pressure was reinforced after protests dubbed a “Day of Rage” in Saudi Arabia proved muted, allaying fears of a Libya-like scenario in the world’s top oil exporter. With little of note on the economic calendar over the coming 24 hours, the spotlight is likely to remain on Japan amid fears of a full-scale meltdown at an earthquake- and tsunami-battered nuclear power plant in Fukushima Daiichi, unleashing a Chernobyl-like disaster and derailing demand for an extended period.

Technical Outlook: Prices are testing below the psychologically critical $100 figure after following a Dark Cloud Cover bearish candlestick pattern with a break through a rising channel bottom. A sustained push lower exposes support in the $96.69-94.49 region.

Commentary: Gold ETF holdings rose for a second consecutive week in the five days through Friday as risk aversion continued to gain momentum, boosting safe-haven demand for the yellow metal. Traders have their pick of reasons to push risky assets lower. While unrest in the Middle East has somewhat shifted out of focus for the time being, the potentially catastrophic situation in Japan – the world’s third largest economy – is likely to continue to weigh on sentiment until a reasonable assessment of the damage is complete and the threat of meltdown at the Fukushima Daiichi power plant is (hopefully) lifted. The forthcoming Federal Reserve rate decision may keep gains limited however as the steady improvement in US economic data beckons policymakers to express a bit more optimism, nudging up interest rate expectations (if only slightly). 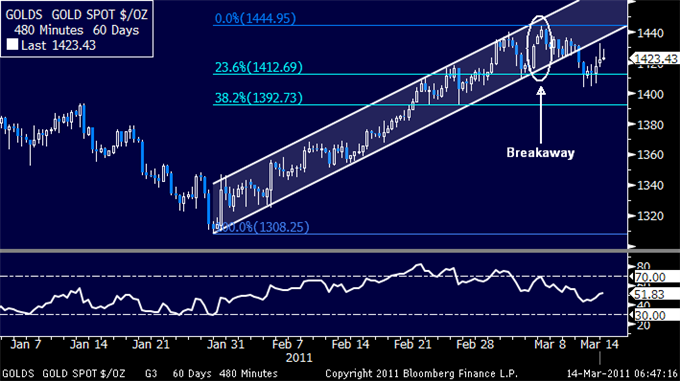 Commentary: As with gold, silver rebounded amid safe-haven buying and looks poised to continue higher as risk aversion continues to gain momentum. The metal outperformed its more expensive counterpart for the seventh consecutive week in the five days through March 11, with the gold/silver ratio setting another record low, and thinner liquidity coupled with advantageous risk/reward parameters is likely to see this dynamic continue for the time being.

Technical Outlook: Prices have rebounded from support at rising trend line set from January’s lows, with the bulls poised to test the 30-year high at $36.75 once again. Negative RSI divergence continues to warn of weakness however, with a break below trend line support (now at $34.96) exposing the 23.6% Fibonacci retracement level at $34.31. 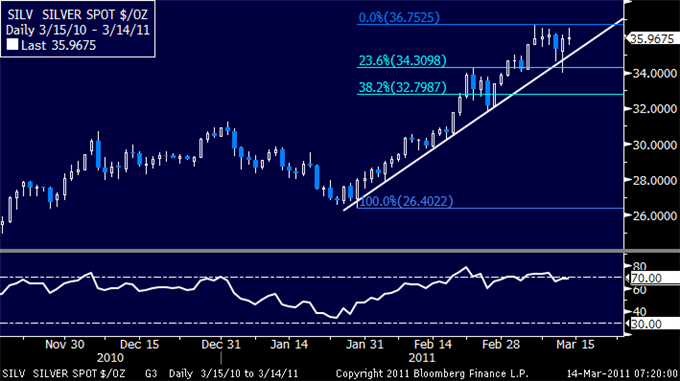