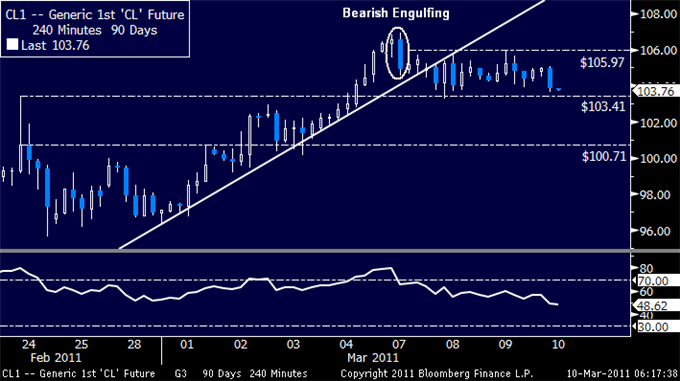 Crude Oil Torn Between China and Libya, Metals Drop on US Dollar Rebound

Commentary: Crude oil is treading water as traders resolve conflicting supply- and demand-side cues that have emerged over the past 24 hours. On the supply side, turmoil in Libya continues to pressure prices higher amid escalating violence in Libya, with government forces launching a fresh round of air and artillery strikes as well as offering a $407,000 reward to anyone who arrests the head of the rebel leadership. Meanwhile on the demand side, a deeply disappointing Chinese trade balance report has cast a cloud over the economic growth outlook for the world’s number-two crude consumer. China unexpectedly reported a trade deficit in February as export growth slumped to the slowest in 15 months. The outlook going forward appears clouded until the tug of war between these competing catalysts is resolved, with the path of least resistance seemingly favoring the downside considering a good deal of traders are now caught long after a month of break-neck gains, hinting a period of unwinding may be ahead.

Technical Outlook: Prices put in a Bearish Engulfing candlestick pattern and broke below support at a rising trend line set from the lows in mid-February to meet support at $103.41, the 2/24 wick high. Consolidation has ensued since, with a push below the current range bottom exposing the $100.71 level. Near-term resistance lines up at $105.97.

Commentary: The onset of risk aversion saw the US Dollar outperform as an already formidable set of headwinds bearing down on sentiment was compounded when Moody’s downgraded Spain’s credit rating, having done the same with Greece earlier in the week. The announcement weighed heavily on the Euro, unearthing debt fears that had laid dormant over recent weeks as the spotlight turned on an increasingly hawkish ECB, sending capital fleeing for the safety of the greenback and sending gold prices lower along the way.

Technical Outlook: Prices are pushing through support at the bottom of a rising channel set from the January bottom having produced a bearish Gravestone Doji candlestick. Initial support lines up at $1412.69 – the 23.6% Fibonacci retracement level – with a break below that exposing the 38.2% boundary at $1392.73. 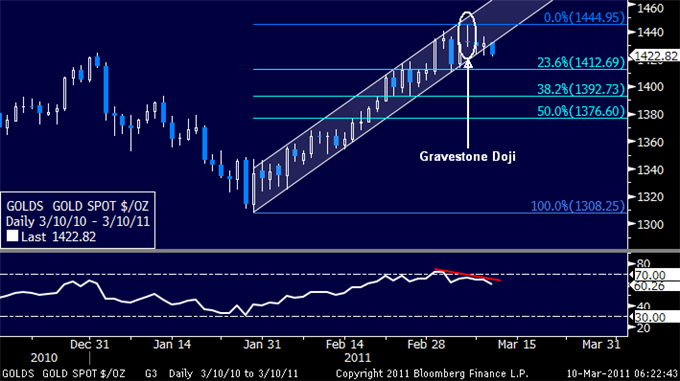 Commentary: As with gold, silver slid lower as broad-based risk aversion drove safety-seeking into the US Dollar. The metal underperformed its more expensive counterpart for the first time in five days, with gold/silver ratio up 1.5 percent ahead of the opening bell on Wall St. 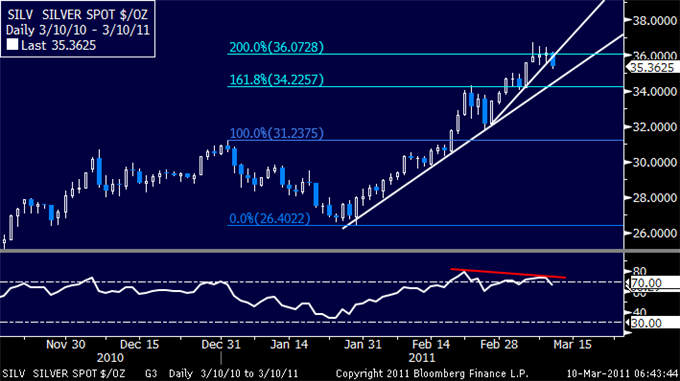