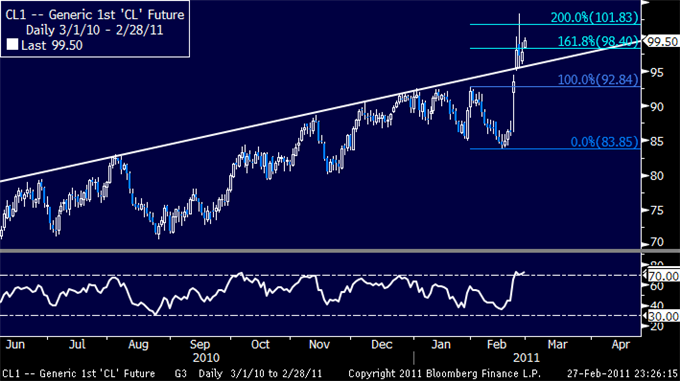 Crude Rises as Unrest Spreads, Gold Inches Back Toward Records

Commentary: Crude oil is starting the new week how it left last week—to the upside. Both WTI and Brent are up almost 2% in early trade, with the former back near the key $100 level. A still very uncertain situation in Libya has the market on edge, and now that a substantial amount of production has been knocked offline due to the crisis, it will be months at least before things are back to normal. Best estimates peg the amount of crude oil production that is offline at anywhere from 800,000 barrels per day to almost the entire 1.6 million barrels per day that Libya produces.

Regardless of how much production is offline, market sources are indicating that exports have virtually grinded to a standstill due to the security situation. As storage fills up, any production that remains online may be forced to shut down as well. Furthermore, unrest continues to spread to other areas of the region, with reports of protests in Oman, a country with production of 800,000 barrels per day. Barring a significant development in Libya that indicates the situation will calm down, expect oil to remain well-supported this week.

Technical Outlook: Prices gapped higher to open the week above resistance $98.40, the 161.8% Fibonacci extension of the downswing from late January 2010. Continued gains from here target the $100/barrel figure, with a break above that exposing the 200% Fib at $101.83. Below $98.40, support is seen at a rising trend line connecting major highs since May of last year, now at $95.63.

Gold Inches Back Toward Records

Commentary: Gold is rising slightly in early-week trade, buoyed by the same factors that are influencing oil. As we wrote in our latest weekly forecast for gold:

“This past week, gold broke above its key resistance area of $1400 as army colonels in Libya aim to halt Mr. Qaddafi’s 42 year reign. According to Human Rights Watch, at least 300 people have been killed in the 11 days of violence and the number is expected to rise further as protests seem unlikely to calm, while Mr. Qaddafi vowed that he will fight the protests until his “last drop of blood.” The developments are worrisome not only for the fact that they look poised to gather pace, but also because protests could spread to countries like Saudi Arabia. It is important to attribute and note the recent rise in oil and gold to the possibility of protests spreading to Saudi Arabia due to the fact that the energy rich country is a key supplier of oil to countries like the U.S. Going forward, so long as tensions remain in the spotlight, contagion fears will linger and gold could witness further buying pressure as trader’s hedge against the declines in the other assets.

Meanwhile, debt fears in the 17 member euro area are deepening, adding confirmation to my bullish gold outlook. As of late, the yield on Portugal’s, Spain’s, and Greek 10 year notes are up 6bp (7.31 percent), 1bp (5.34 percent), and 4bp (11.60 percent) respectively. The increase in yields should not be overlooked alongside the increase in credit default swaps because these concerns are poised to return to top headlines in financial news soon. With regards to credit default swaps, insurance against a default in Greece stands at 944.21, marking its highest level since early January, while insurance against Spanish, Portuguese, and Irish debt extend their advance. As the troubled economy runs out of options, leaders are pushing EU leaders to adopt a new crisis measurement at its summit next month. Failure to meet market expectations will not only send the euro into a free fall, but will also lead gold to push higher.”

Technical Outlook: Prices continue to consolidate between triple top resistance at 1424.60 and a rising trend line set from the January low (now at $1396.93). Negative RSI divergence hints at the likelihood of a downside scenario, with a break below the trend line and the nearby horizontal barrier at $1393.30 (the Jan 13 high) initially exposing $1376.20. 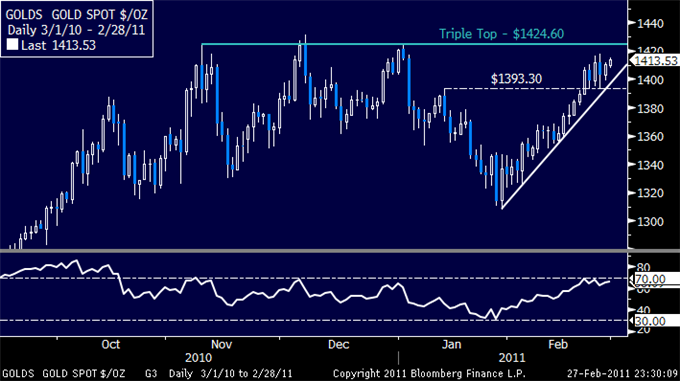 Commentary: Silver was on a tear last week, rising to new 30-year highs above $34. As prices have moved to higher levels, volatility has picked up, with moves of 4% in either direction par for the course. Volatility over the last 10 days has been 47% versus the 30-day volatility of 37%.

Technical Outlook: Prices bounced higher from support at a rising trend line support set from January’s bottom, with the bulls seemingly keen to retest resistance at the psychologically significant $34.00 figure once again. Negative RSI divergence points to fading upward momentum however, with a reversal through the trend line (now at $32.29) exposing the 38.2% Fibonacci retracement of the 1/28-2/22 advance at $31.30. 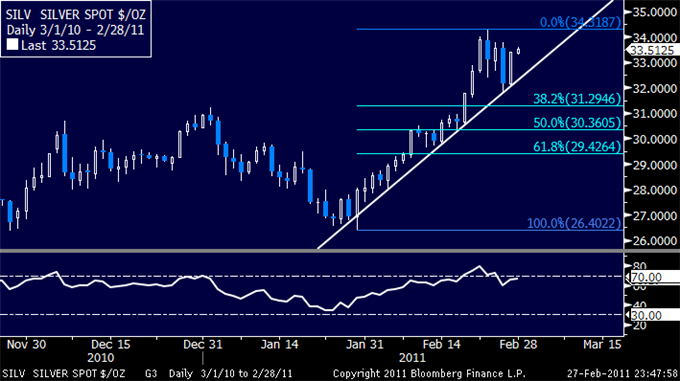