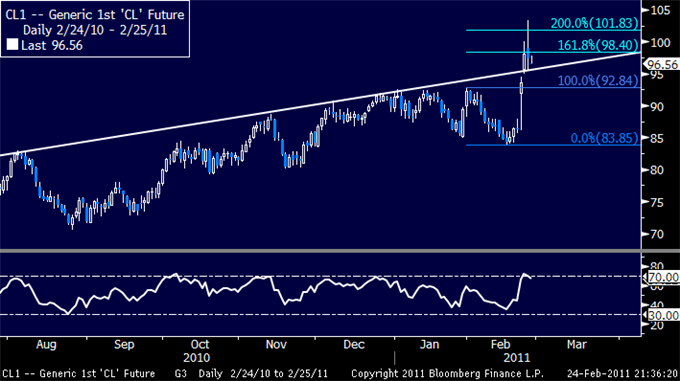 Saudi Arabia has come out and pledged to supply oil to any consumers that ask for additional barrels, which can be interpreted as a de facto hike in output. If Libyan production stays offline, refineries will likely take the Saudis up on the offer, adding incremental barrels to the market. Nevertheless, the market remains extremely tight and the draw down in OPEC spare capacity and the prospect of further turmoil in the North Africa-Middle East region will likely keep prices elevated throughout the year barring a sharp economic slowdown.

Technical Outlook: Prices spiked higher but overall positioning remains little changed, with crude trapped between the 161.8% Fibonacci extension of the downswing from late January 2010 ($98.40) and a rising trend line connecting major highs since June (now at $95.53). Renewed upward momentum targets the 200% Fib at $101.83 while a break back below the trend line exposes $92.84.

Commentary: Gold fell $8.82, or 0.63%, to settle at $1402.88 on Wednesday. Prices are having trouble breaking through resistance in the $1420’s, a key technical barrier. Libya concerns continue to support the safe haven metal, but a failure to surpass the highs could lead to selling if and when the situation calms down.

Gold – FOREX correlations were mixed in the latest week:. The correlation between AUD/USD and gold deteriorated, with the two displaying no meaningful relationship; AUD/USD was flat week-over-week, unable to keep up with surging gold prices. Meanwhile, USD/CHF plunged to new record lows, causing the correlation between the pair and gold to stay firm at -0.74.

Technical Outlook: Prices continue to consolidate below triple top resistance in the $1411.75-1424.60 region. Negative RSI divergence hints at the likelihood of a downside scenario. Initial support lining up at $1393.30 (the Jan 13 high) and is reinforced by a rising trend line set from the January low. Penetration below this barrier initially exposes $1376.20. 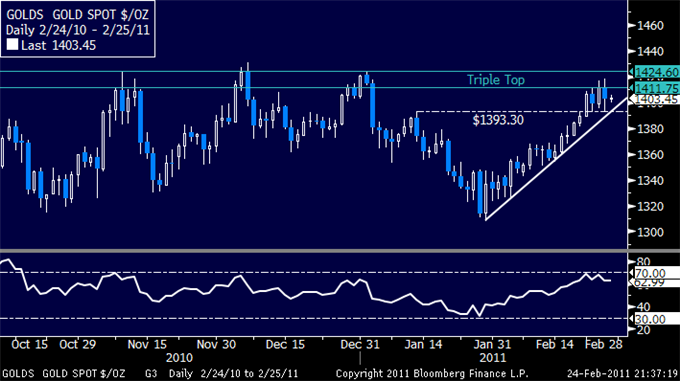 Commentary: Silver fell significantly on Wednesday, shedding $1.4, or 4.17%, to settle at $32.15. Given how fast and how high silver has climbed, this type of volatility is to be expected.

Technical Outlook: Prices pushed lower after putting in a bearish Dark Cloud Cover candlestick below the $34.00 figure, taking out initial support at the 23.6% Fibonacci retracement of the 1/28-2/22 advance ($32.45). The bears have now challenged rising trend line support set from January’s bottom (now at $32.19), with a break below that exposing the 38.2% Fib at $31.30. 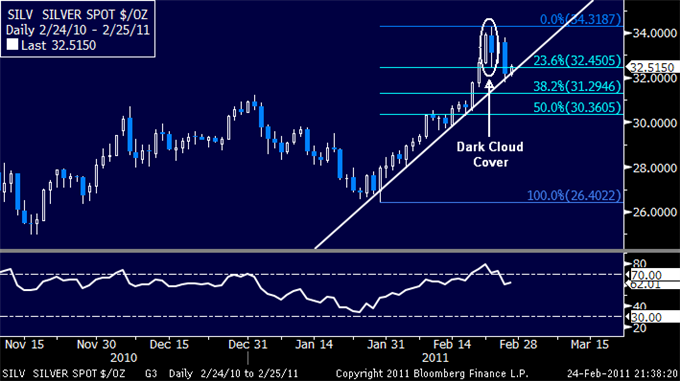