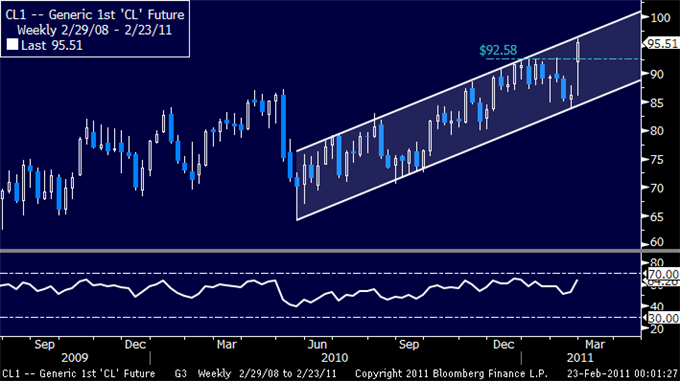 Commentary: Oil rose on Tuesday, boosted by the same Libya concerns of the day before. Civil war seems to be raging in the North African nation, with the Gaddafi regime using extreme measures to keep control, even going as far as to bomb civilian targets. Market sources have said that Libya has declared force majeure on energy exports, a clause in contracts that excuses a producer from fulfilling its duties due to extraordinary circumstances. As many of the oil installations are now occupied by the opposition, Libya’s oil industry is somewhat dysfunctional, with reports of some foreign operators halting their operations, including Eni and Repsol. Clearly, oil prices have some geopolitical risk premium embedded in them at the moment. If the situation deteriorates or spreads to the wider region, expect that premium to increase. Conversely, a calming of the situation would dampen the premium and overall prices.

Technical Outlook: Prices are testing the top of a rising channel set from the low in June 2010 (now at $96.46), with a break higher initially exposing $97.98. Alternatively, a pullback from the barrier sees initial support at $92.58.

Commentary: Gold fell on Tuesday, falling back under $1400 as some of the risk premium from Monday came out of prices. The metal ended $7.32, or 0.32% lower, to $1399.13. Some traders are taking the opportunity to sell the rally as evidenced by the fact ETF holdings hit a new 8-month low. Nevertheless, prices remain resilient in the face of this exodus by a segment of the market, suggesting other consumers are using dips as opportunities to buy.

Technical Outlook: Prices put in a bearish Harami candlestick below major triple top resistance in the $1411.75-1424.60 region. A breakdown below initial support at $1393.30 exposes a rising trend line set from the January low, now at $1384.26. Penetration below the latter barrier is needed to meaningfully renew selling pressure. 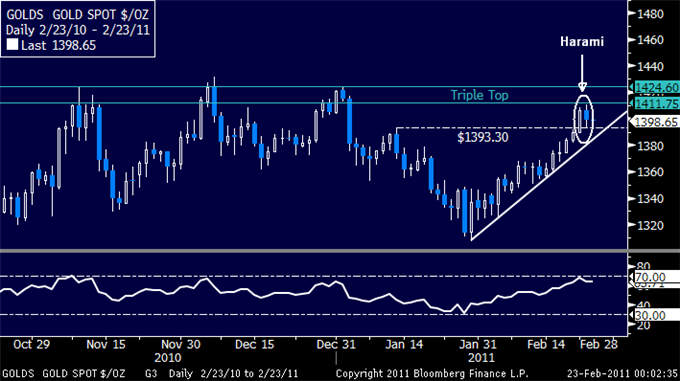 Commentary: Silver lost $0.81, or 2.38%, to settle at $33.09 on Tuesday. The move was mere profit taking after a sizzling rally that took the metal to fresh 30-year highs earlier this week.

Technical Outlook: Prices put in a bearish Dark Cloud Cover candlestick below the $34.00 figure, hinting a move lower is ahead. Initial support lines up at $32.45, the 23.6% Fibonacci retracement of the 1/28-2/22 advance, although a breach of rising trend line support set from January’s bottom (now at $31.67) is needed to confirm the bears have overtaken momentum. 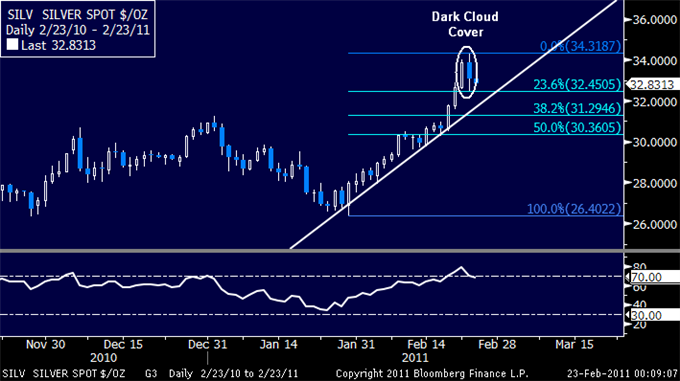