Commentary: Oil prices skyrocketed on Monday, with Brent adding $3.22, or 3.14%, to settle at $105.74- while WTI didn’t settle due to the U.S. President’s day holiday- but is up a whopping $6.56, or 7.61%, to $92.76 in electronic trade. Without question, the unrest in Libya is fueling this move. As an OPEC member with production totaling 1.55 million barrels per day, the country is significant to the oil market.

But it’s not just Libya—the country is simply one domino in this wider democracy movement that is spreading across the Middle East and North Africa. Could neighboring oil giants Iran and Saudi Arabia be next? That is the oil market’s concern. At the same time, as we wrote yesterday, demand remains extremely robust as emerging markets grow rapidly and even developed market economies seem to be gaining their footing. But with energy costs to consumers now rising back toward their record levels of 2008, the backlash will start to be felt; it’s just a matter of time.

Technical Outlook: Prices have rebounded violently higher to challenge January’s top at $92.84. A break above this juncture exposes the top of a rising channel set from the June 2010 bottom, now at $96.46. Near-term support lines up at the psychologically significant $90.00 figure, with a move below that exposing the 23.6% Fibonacci retracement of the 8/27/10-1/7/11 up leg at $87.63.

Commentary: Gold surged $16.92, or 1.22%, to settle at $1406.45. The same Middle East factor that is pushing up crude oil is boosting gold prices. These developments have not had an impact on ETF holdings thus far, however, with those still sitting near 8-month lows. Instead, demand is coming from other segments of the market such as consumers and investors in Asia, physical investment demand in developed economies, and even central banks. 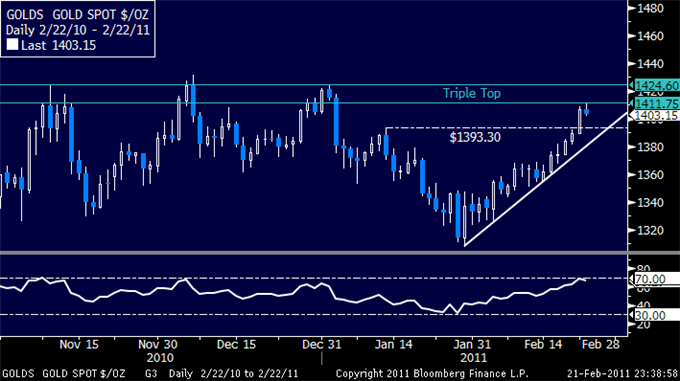 Commentary: Silver surged to yet another 30-year high, settling at $33.89, up $1.24, or 3.81%. Unlike those for gold, silver ETF holdings have been creeping higher ever so slightly after falling 4.5% from December to January.

Technical Outlook: Prices are pulling back a bit having found resistance at the $34.00 figure, a psychological barrier reinforced by the 161.8% Fibonacci extension of the downswing noted through January ($34.23). The first layer of significant support appears at $33.09, the intersection of the 138.2% Fib and the top of a rising channel broken to the upside late last week. 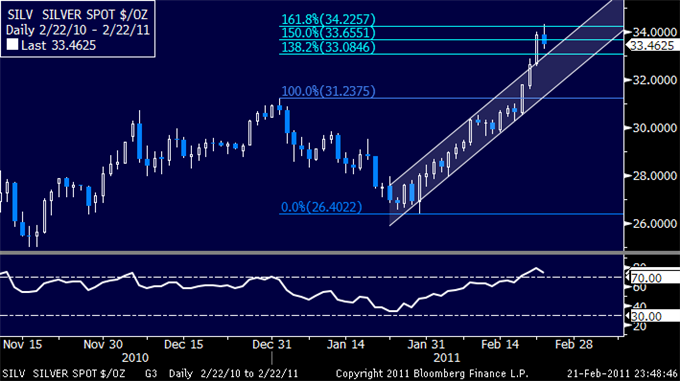