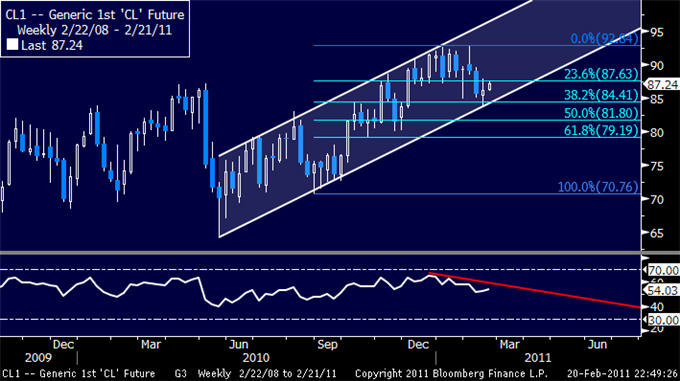 Commentary: Crude oil prices are kicking off the week to the upside as unrest in the Middle East and Africa intensifies. Clashes in Libya have turned violent, with some predicting that Muammar Qaddafi’s regime would soon fall; the country produces 1.6 million barrels a day. Riots have also broken out in Bahrain, an inconsequential oil producer, but one that neighbors oil giant Saudi Arabia. Protests have also continued in Iran, but the government there has been quite successful in squashing the opposition movement.

As long as the situation in this key oil-production region of the Middle East and North Africa remains so volatile, expect prices for the commodity to remain supported. And while unrest in these countries provides support on the supply side, a distinct improvement in economic data has been providing support on the demand side. Even interest rate hikes from China have not dampened the mood, for data from the country remains robust. In order to see oil prices fall meaningfully, there would need to be deterioration in these fundamental underpinnings. Either the situation in the Middle East/Africa needs to calm down or economic growth needs to show signs of weakening.

Technical Outlook: Prices have found support at $84.41, the intersection of the 38.2% Fibonacci retracement level and the lower boundary of a rising channel set from the June 2010 swing low. A Star candlestick points to indecision, hinting a corrective upswing may be ahead. Initial resistance lines up at $87.63, the 23.6% Fib.

Commentary: Gold is rising to start the week, as the same Middle East concerns that are rattling oil, support the safe haven metal. As written in our latest weekly gold forecast:

“Gold extended its two week advance and now looks poised to push higher as global debt and inflation concerns continue to rattle the markets. At the same time, unrest in the Middle East is fueling demand in the yellow metal. As recent developments point to further gains in the bullion, traders should not rule out a move back towards the record high of $1432.5/oz.

This past week, it seemed as if gold overtook $1380 with ease as tensions in the Middle East deepened, while global inflationary pressures continue to make policy difficult in major economies. With regards to the former, following protests in Egypt, Iranian state TV said that warships were en route to the Suez Canal due to growing unrest in Bahrain Yemen. As of late, reports have shown that at least five people have been killed since the protests in Yemen which began on February 14th against Bahrain’s ruling Al Khalifa family. The troubles do not stop there; protests have now emerged in Algeria and Iran. Therefore, as tensions in the Middle East continue to gather pace, gold could witness further buying pressure as trader’s hedge against the declines in the other assets….” 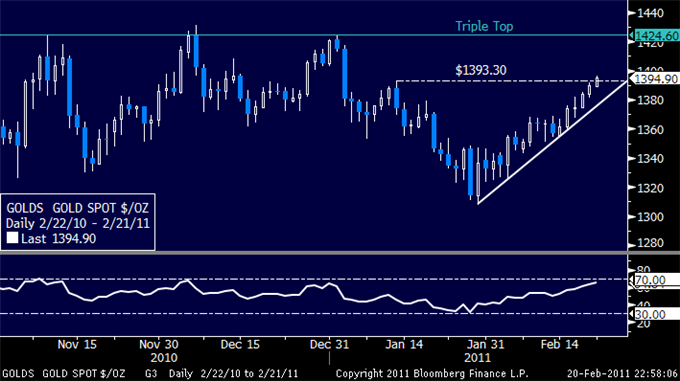 Commentary: Silver is surging to new 30-year highs early this week, rising above $33 at one point. Prices for this metal have consistently outperformed gold both when the metals have been rising and falling. Clearly, silver is now in favor as traders view the metal as a relative bargain to gold based on their historical relationship. 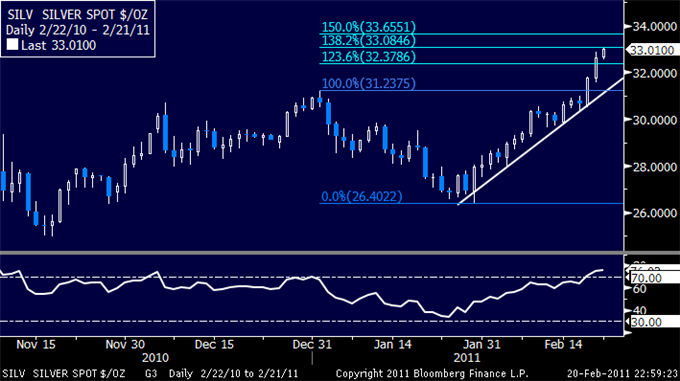