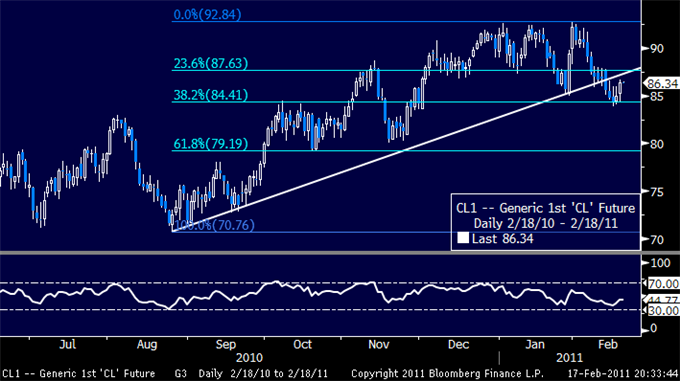 Crude Gets a Boost from New Equity Highs, Gold Continues to Rally

Crude Gets a Boost from New Equity Highs

Commentary: Oil prices mostly rose on Thursday, with WTI adding $1.37, or 1.61%, to settle at $86.36, while Brent bucked the trend, falling $1.19, or 1.15%, to settle at $102.59. The S&P 500 U.S. equity index hit a fresh 32-month high, as stocks continue to climb relentlessly. Economic data for the data was highlighted by the release of January U.S. Consumer Price Index figures, which showed a 0.2% month-over-month increase in core CPI, the fastest growth since October, 2009. A 0.2% increase is typical of economic expansions and not cause for worry in and of itself, but it points to the fact that inflation is normalizing, suggesting that the Fed will likely begin to ponder its exit strategy. When the central bank begins to send signals to the market that tightening is on the horizon, it may lead to a correction in asset prices. In the meantime, there seems to be a distinct lack of catalysts to push prices lower, even briefly.

Technical Outlook: Prices have staged a corrective recovery from $84.41, the 38.2% Fibonacci retracement level, to retest support-turned-resistance at a rising trend line set from Augusts’ swing low (now at $87.16). This boundary is reinforced by the 23.6% Fib at $87.63, and anything shy of a daily close above the latter level keeps the existing bearish bias intact. The 38.2% retracement remains as near-term support.

Commentary: Gold rallied for a third straight session, adding $9.67, or 0.7%, to settle at $1384.10. According to a recent report from the WGC, China’s investment demand for gold rose an incredible 70% on 2010. Another highlight was the fact that India’s gold imports hit a record in the year.

As we’ve been harping on recently, gold has been rising these past two weeks despite a sharp decline in ETF holdings, suggesting that demand from other segments of the market is supporting prices. Meanwhile, the U.S. Dollar has begun to decline over the last few days, which has enabled correlations between gold and the forex market to strengthen:

“Gold – FOREX correlations strengthened significantly in the latest week, as gold rebounded from its recent correction, while the U.S. Dollar sold off over the last few days. The correlation between AUD/USD and gold improved from the anomalous -0.41 of last week to 0.32. That between USD/CHF and gold also improved from 0.68 to a strong -0.89.” 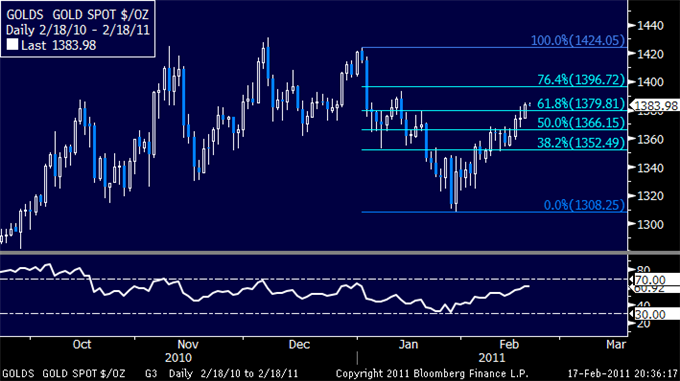 Commentary: Silver surged $1.13, or 3.69%, to settle at $31.78, a new 30-year closing high. Silver’s recent move seems to be a resumption of the bull trend that began during the middle of 2010. Clearly, the correction in prices that we saw earlier this year was mere profit taking. Given the momentum of the metal, prices may move even higher as traders begin to pile in. 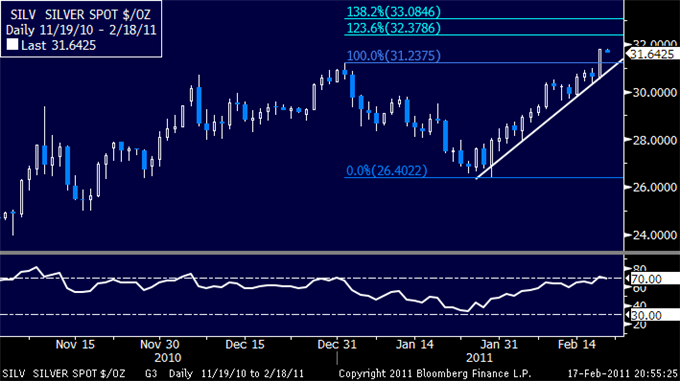