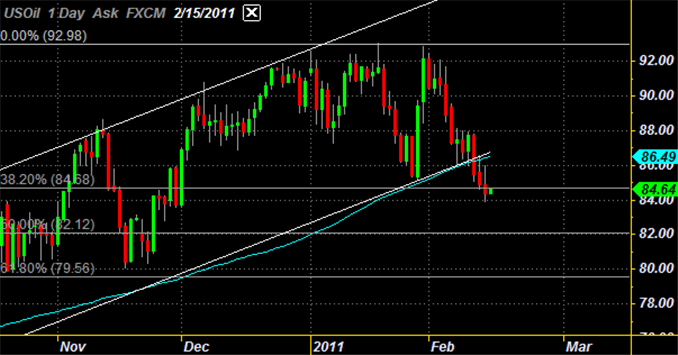 Crude Falls on Profit Taking, Gold Pushes out of Congestion

Most economists still believe that China will raise rates at least a couple more times throughout this year, in an effort to dampen inflation pressures. Food prices are of particular concern, but if the rise in food and commodity prices in general has more so to do with global supply and demand considerations than any monetary phenomena, such hikes will have limited impact. Of course, if the Chinese economy slows in response to the tightening of monetary conditions, it would be detrimental to commodity prices considering that China has been such a powerful driver of demand on the margin.

Technical Outlook: US oil extended its bearish reversal from the late-January’s triple top confirmation at $93. And, after dropping below the floor of a multi-month rising trend channel and the 100-day SMA, it seems bearish conviction seems well engrained in the market’s psyche. The third consecutive daily decline would slip below the 38.2% Fib retracement of the August to January bull wave near $84.75. This wasn’t exactly a clean break, however, as there was exceptional intraday volatility and the market barely closed below the subtle support. Going forward, there is precedence for congestion between $84 and $80 which could trip the market up; but the greatest threat to a consistent trend is a lack of momentum.

Gold Pushes out of Congestion

Commentary: Gold rose for a second day, adding $11.95, or 0.88%, to settle at $1373.80. The decline in ETF holdings continued, with levels now at 64.85 million, an eight-month low. Clearly, gold is garnering interest from other segments of the market, perhaps physical investment demand or even jewelry demand as economic growth picks up.

Technical Outlook: A hearty boost from gold would finally push the metal out of a week-long period of congestion. Perhaps more remarkable though was the fact that the solid rally would drive the commodity clear through a 50 percent Fib retracement of its January bear wave, the 50-day SMA and the 100-day SMA. This was a significant technical run; but it falls far short of assuring meaningful follow through on the metal’s bullish bias for the past three weeks. This market is still bound by a rising congestion pattern that has reined in momentum – keeping conviction restrained. 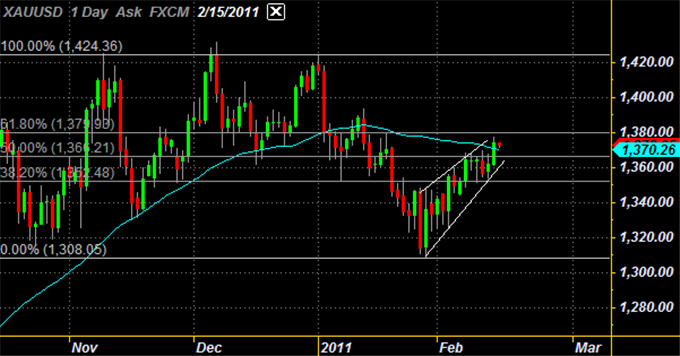 Technical Outlook: It may seem that bearish influence in the silver market is keeping a strained bull market under control. However, the reality is this particular metal is highly susceptible to sharp bouts of volatility. That said, keeping spot back from a test and break of the multi-decade high of $31.30 is more likely a factor of dampened activity levels. Indeed, looking at the futures market, volume slowed to its lowest level of turnover in six days. Not the conviction expected for a meaningful drive for a breakout to multi-decade highs. 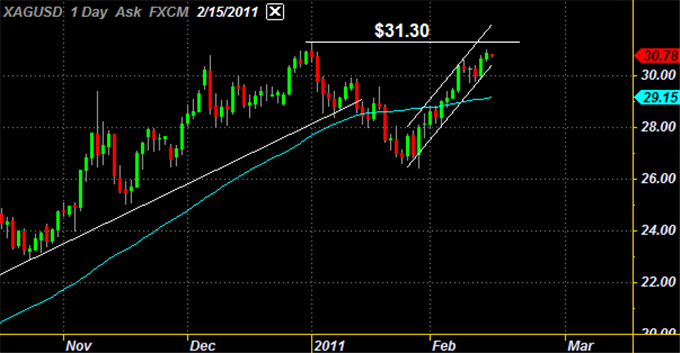