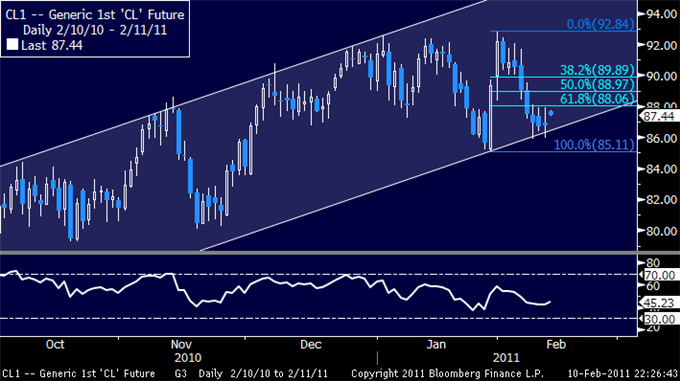 Egypt was back in the headline on Thursday after President Mubarak rejected calls to step down. Earlier, the military had suggested that he would resign, but instead he delegated powers to the Vice President As one might expect, protestors were not happy about this development. While the probability that the events in Egypt will have any material impact on crude oil production remains low, they do underscore the fact that a majority of the world’s output comes from risky areas.

That being said, crude oil prices have rallied sharply to level over $100 in recent weeks, pricing in a lot of these supportive elements. We would now be looking for pullbacks, but given that fundamentals are bullish, we would refrain from taking short positions. Rather, we would look for long entries at lower prices, such as the low-$80’s for WTI and low-$90’s for Brent.

Technical Outlook: Prices are testing support at the bottom of a major rising channel set from late August, now at $86.44. A break through this juncture would amount to a significant bearish reversal, initially targeting the $85.00 figure but likely opening the door to longer-term selling. Near-term resistance lines up at $88.06, the 61.8% Fibonacci retracement of the rally from January’s low.

Commentary: Gold was little changed for a second day on Thursday, inching $0.15, or 0.01%, higher to settle at $1363.80. There continues to be a divergence between ETF holdings- which reached another multi-month low below 65 million troy ounces on Thursday- and prices, which have been rather resilient.

In the same vein, gold’s correlation with currency markets has been extremely weak recently. In the latest period, for example, the correlation between gold and the Australian dollar was actually negative- a rare occurrence that illustrates the puzzling price action in gold.

Indeed, Gold – FOREX correlations “weakened significantly this past week as gold and currencies continue to fluctuate independently. A pronounced lack of volatility and well-defined trends has led to choppy price action, which is leading to this disconnect. Once a larger trend emerges, then we may see correlations reestablished.”

Technical Outlook:Prices continue to stall ahead of resistance at $1366.15, the 50%Fibonacci retracement of the 1/3-1/28 downswing, with a bearish Dragonfly Doji candlestick pointing to fading bullish momentum and hinting a reversal lower is ahead. Initial support stands at $1352.49, the 38.2% Fib. 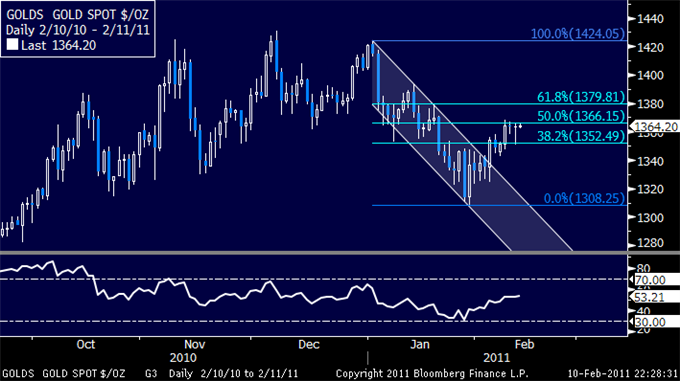 Commentary: Silver settled unchanged on Thursday, mirroring the moves in gold. As we wrote yesterday, “n the bigger picture, however, silver has significantly outperformed gold over the past several days, weeks, and months. This is even though silver ETF holdings have fallen just as significantly as those for gold (4.5% vs 4.3%). One explanation could be that the acceleration of industrial demand amid the improving economy has given more benefit to silver than gold, as the former is used much more heavily in industrial applications than the latter.”

Technical Outlook: Prices remain perched above the 76.4% Fibonacci retracement of the 1/3-1/28 downswing, a former resistance level acting as support. From here, the bulls aim to challenge the 30-year high at $31.24. 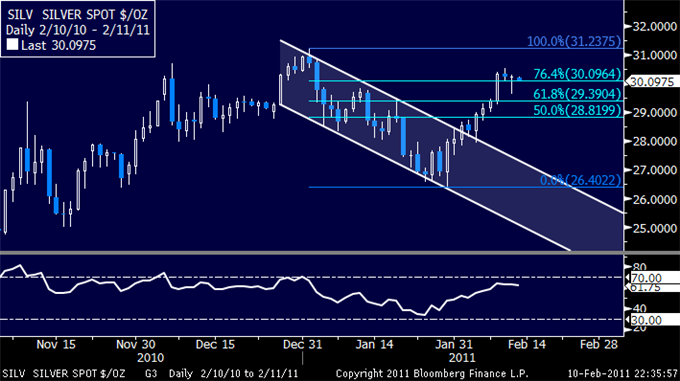