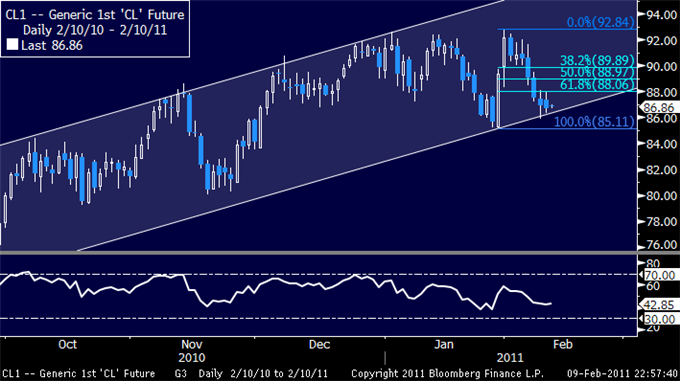 Wednesday’s move higher was merely a continuation of the upward momentum we have seen in crude since November. Excluding the very sharp and temporary correction in November, this uptrend has been in place since August. That means that oil has been advancing rather steadily for six months in a row- a remarkable rally by any measure, but one that is in-line with what we have seen in U.S. equity markets and other commodities. Thus, we see that the price action in oil continues to be heavily influenced by macroeconomic developments and broader financial market money flows. While it is impossible to tell when this trend will break, we would not be buyers at these levels. We would look for pullbacks as buying opportunities and would look to the technicals for guidance as to when to initiate positions.

In terms of the day’s developments, pirates hijacked a supertanker off eastern Oman. The tanker was headed to the U.S. from Kuwait and was carrying approximately 2 million barrels of crude- an significant amount in the grand scheme of the market. Nevertheless, the event highlights the fact that much of global supply comes from risky areas of the globe. Not to mention, the situation in Egypt is still not resolved.

Technical Outlook:Prices are testing support at the bottom of a major rising channel set from late August, now at $86.31. A break through this juncture would amount to a significant bearish reversal, initially targeting the $85.00 figure but likely opening the door to longer-term selling. Near-term resistance lines up at $88.06, the 61.8% Fibonacci retracement of the rally from January’s low.

Commentary:Gold was little changed on Wednesday, falling $0.38, or 0.03%, to settle at $1363.65. In a testimony to Congress, Fed Chairman Bernanke defended the central bank’s latest quantitative easing program, ‘QE2’, stating that it helped to create 3 million jobs. As there was no new information in the speech, unsurprisingly, gold didn’t react. Separately, Fed President Dennis Lockhart indicated that yet another round of quantitative easing (QE3) was not likely. Given the notable improvement in U.S. economic data, this was likely already discounted by the market.

Interestingly, we still haven’t seen any uptick whatsoever in gold ETF holdings despite the significant rally in gold prices. Some are speculating that the recent move is a combination of long-term investment—perhaps on the physical side—and short covering in futures after prices failed to decline after China’s surprise rate hike earlier this week. Given gold’s strength in the face of seemingly bearish fundamentals, we will not be initiating any positions, long or short, at this time.

Technical Outlook:Prices continue to stall ahead of resistance at $1366.15, the 50%Fibonacci retracement of the 1/3-1/28 downswing, with a Doji candlestick pointing to fading bullish momentum and hinting a reversal lower is ahead. Initial support stands at $1352.49, the 38.2% Fib. 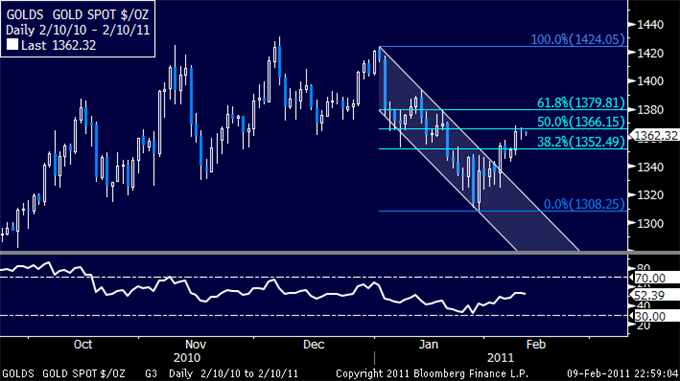 Commentary:Like gold, silver was little changed on Wednesday, shedding $0.11, or 0.35%, to settle at $30.21. In the bigger picture, however, silver has significantly outperformed gold over the past several days, weeks, and months. This is even though silver ETF holdings have fallen just as significantly as those for gold (4.5% vs 4.3%). One explanation could be that the acceleration of industrial demand amid the improving economy has given more benefit to silver than gold, as the former is used much more heavily in industrial applications than the latter.

Technical Outlook: Prices remain perched above the 76.4% Fibonacci retracement of the 1/3-1/28 downswing, a former resistance level acting as support. From here, the bulls aim to challenge the 30-year high at $31.24. 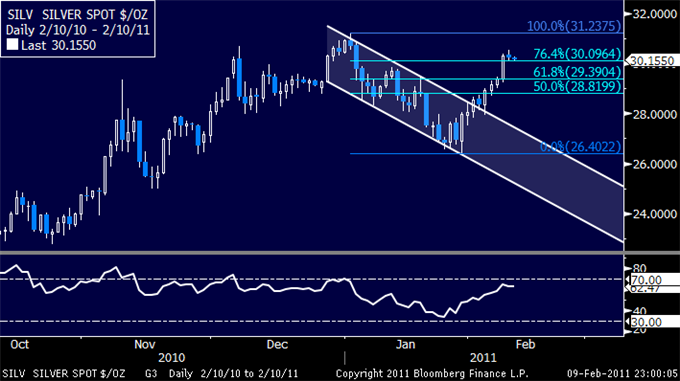