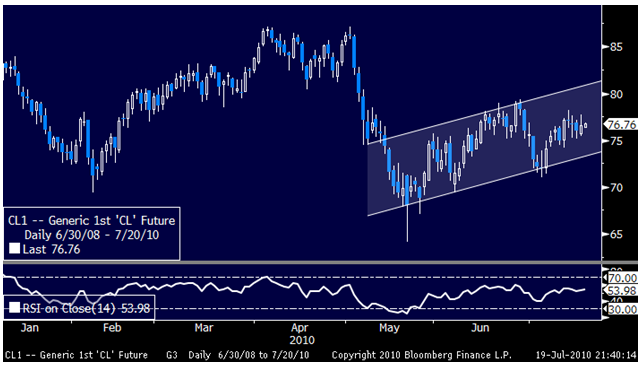 Commentary: Just as crude oil inched lower throughout the latter half of last week, the commodity is inching higher to start this week. While on the surface it looks as if crude oil has found a comfort level, the reality is that the commodity is being pushed and pulled by two very powerful, opposing forces.

Pushing crude to the upside is the outlook for Gulf of Mexico production and the outlook for world oil demand. Although the courts have recently struck down the offshore drilling moratorium, the damage has already been done. The number of rigs drilling for oil in the Gulf of Mexico has fallen sharply, with many rigs already contracted to leave the region. With regard to demand, the outlook is bright, as year-over-year growth is expected to be near 1.8mmbbl/d, with much of that coming from China.

Pushing crude oil to the downside are the fears regarding the world economy and the possibility of a double dip. World equity markets remain well off their recent highs and economic data has indicated a slowing of growth around the globe. If major world economies fall into a second phase of contraction, crude oil prices will likely fall steeply.

Technical Outlook: Prices continue to consolidate inside a rising channel. Initial support lines up near $75.00, while resistance is seen in the $78.13-79.38 congestion region.

Commentary: Gold broke through the bottom of the recent congestion range on Monday, despite another increase in gold ETF holdings. The recent correction has been quite methodical with a distinct absence of panic in the market. Though there is likely further downside remaining, we are currently not expecting a precipitous decline from these levels.

Technical Outlook: Prices are testing support at a rising trend line established from the swing bottom in early February. A bounce sees initial resistance at the $1200 figure, followed by a horizontal barrier at $1212.45. Continued selling targets $1170 and $1151.80.

Commentary: Silver fell in step with gold on Monday, but unlike the more prominent metal, silver did not break recent support levels. In the event that gold continues to fall, there is no question that silver will follow. While there may be minor fluctuations in the gold/silver ratio between 60 and 70, in all likelihood, the two metals will remain tied at the hip for the foreseeable future.

Technical Outlook: Prices have formed a descending triangle chart formation above support at $17.42. This setup is typically a continuation pattern, hinting further gains ahead. That said, it also carries a negative connotation and may hint at an emerging bearish bias. A break below support exposes $16.81, while a rebound sees initial resistance at $18.73. 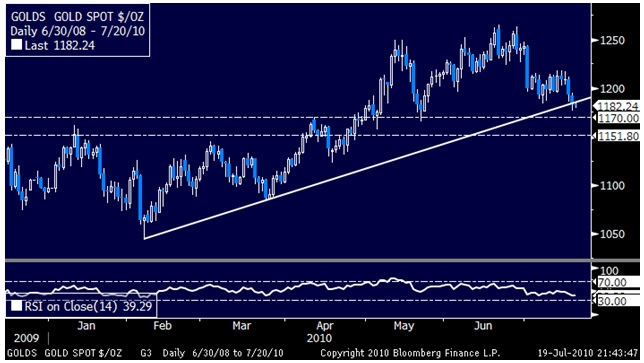