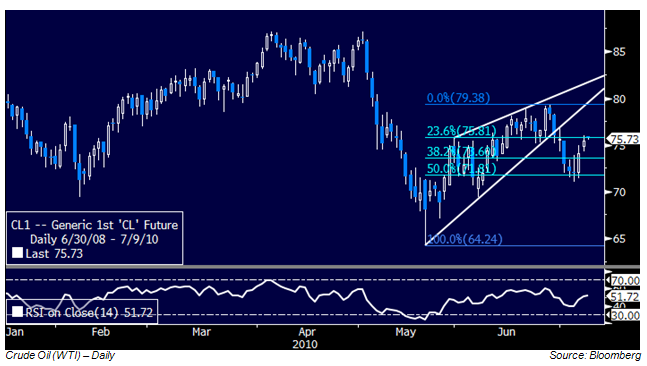 Crude Oil Back To Middle of Range, Gold Caution Warranted

Commentary: Crude oil was up in yesterday’s overnight session on the back of bullish API figures, which showed a 7 million barrel crude oil draw. That strength continued into the New York open outcry session, with oil registering its high of the day in the moments before the release of the EIA inventory data. Immediately after the report, oil sold off about $1.50, but by the end of the day, prices had rebounded back near the highs.

Nevertheless, it has been quite some time since inventory figures had any lasting impact on crude oil prices. Storage is extremely high across the OECD, though the surplus is stable and not increasing. Crude oil prices have instead been at the mercy of the global economic outlook, as well as that of U.S. Gulf of Mexico output. The latter has been a bullish underpinning, while the former has presented a headwind in recent weeks. This tug-of-war has served to keep oil largely contained between $70 and $80. The evolution of the world economy and GOM production will determine whether prices can break free of this range.

Commentary: Gold fell back below $1200 on Thursday. The metal has been struggling after a spectacular $53 peak-to-trough plunge a week ago. Flows into gold ETFs continues at a steady pace, with holdings reaching a new record this week. The fact that investors have not turned their back on gold is supportive in the medium term. In the near-term, however, another class of market participants—short-term traders—are now more cautious on the metal following a breakdown of a steep trendline which defined the latest uptrend. Furthermore, some traders may feel emboldened to short gold following last week’s reversal. Caution thus prevails in the near-term, and a bit of consolidation is likely in the cards.

Technical Outlook: Prices have found near term support just above 1181.09, the 38.2% Fibonacci retracement of the upswing from early February, after breaking down out of a bearish Rising Wedge chart formation. Continued selling targets the 50% Fib at $1155.08, while the 23.6% Fib at $1213.27 marks initial resistance.

Commentary: Silver’s movements continue to be tied to gold. With some of the luster coming out of the more prominent metal, there is little reason traders would flock to silver at this time. Look for the gold/silver ratio to largely stay between 60 and 70.

Technical Outlook: Prices have held the very strong horizontal support near $17.50. Silver, like gold, is likely to consolidate in the near-term. Additional tests of the $17.50 level may be in the cards. 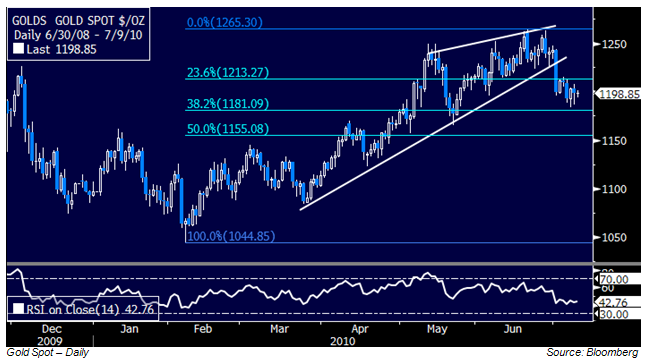