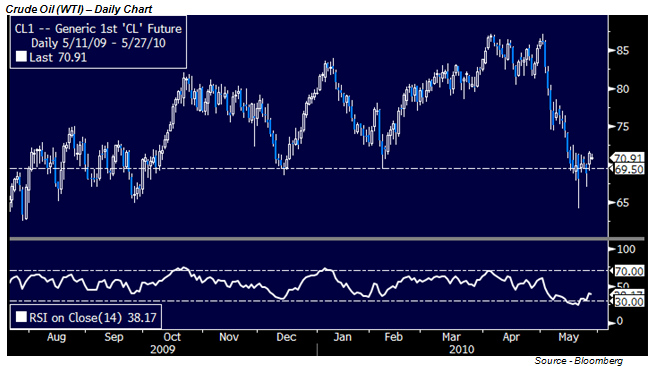 Crude Oil (WTI) $70.91 -$0.60 -0.84%
Wednesday was an interesting session for crude as the commodity decoupled from the broader financial markets. For most of the day, prices would follow a familiar pattern: as stocks rose, oil followed. Late in the day as stocks began to roll over, however, oil did not follow. Prices settled with a gain of 4%, near the high of the day.

The EIA Petroleum Status Report released on Wednesday had little influence on price. Crude stocks rose 2460K barrels, Gasoline stocks fell 203K, Distillate stocks fell 267K, and Total Petroleum stocks rose 5834K. The report was another bearish data point with regard to physical fundamentals, as the build in crude was in sharp contrast to the withdrawal we would typically see at this time of year (5 Yr Average: Crude -2633K, Gasoline -67K, Distillate +931K, Total Petroleum +1949K). U.S. inventories are now 77 million barrels, or 7.6% above the 5-Yr average, while the absolute level of inventories is close to a 7-year high.

Also of note in the inventory report was a 324K withdrawal in Cushing, Oklahoma. Though only slightly off the record highs set just last week, Cushing stocks should continue to trend down seasonally. Calendar spreads narrowed significantly on the prospect that storage will not test capacity at the NYMEX delivery point, at least for now. Calendar spreads are the cost of holding long crude oil positions from month to month. At $1.05, the front/second month spread is the lowest level in over a month.

Crude is currently giving up some of Wednesday’s gains, as the commodity plays catch up with stocks. It is unlikely that oil has somehow decoupled from the broader financial markets. Indeed, extremely bearish physical fundamentals suggest oil should be underperforming other assets if anything—and it has been, up until Wednesday. It would seem that the rally was largely technical, rather than fundamental in nature. Quite simply, after consolidating around the $69.50 support level for seven days without a significant close below, prices bounced. Heading into Thursday’s session, look for the familiar positive correlation between stocks and crude to reassert itself. 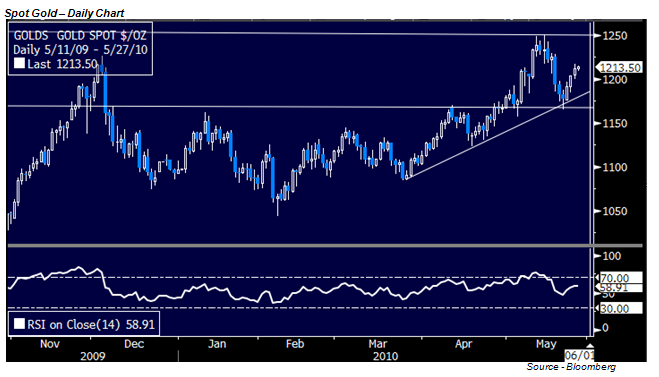 Questions or Comments about this article? Send them to instructor@dailyfx.com