Crude oil prices have lost momentum today as fears over demand related to the sovereign debt crisis in Europe are weighing on the topside. Earlier this week, Greece accepted the bailout from the IMF and the EU worth $146 billion in order to avert default and prevent the countries debt crisis from spreading through the rest of the bloc. However, markets reacted negatively to the announcement, causing the euro decline and crude oil prices to pull back from overnight highs, and leading both to continue its southern journey on Tuesday. Many traders are speculating that the bailout is not enough and despite what EU members may publicized, inventors believe that the crisis has already spread onto other EU members  similarly to what OECD’s Secretary General Gurria refers to as “Ebola.”  Indeed, Crude has also come under pressure as the US dollar posts fresh 2010 highs following the rise in risk appetite over the past 24 hours. Additionally, the decision by the People’s Bank of China to further raise the reserve requirement ratio over the weekend is capping bullish momentum at the present moment as the region digests the news and tries to estimate if there will be a slowdown in the surging Chinese economy, which will certainly effect crude demand. Despite all the negative factors and a general pull back in risk aversion today, prices have been holding up relatively well in such volatile conditions and we may see price action test the yearly high of  $87.28/bbl before retreating back to $80/bbl if European woes let up. Looking ahead, the fundamentals of supply and demand are surely to weigh on the crude prices.

The disconnect in the commodities bloc continues and has been magnified by today’s renewed sovereign debt fears. Gold looks well on its way to $1,200 as the yellow metal continues to shine vs. non-USD currencies, as it moves in tandem with the dollar. Historically a rare occurrence but certainly a valid correlation as investors use the two as safe haven assets. Gold is being viewed by the masses as an asset class that will survive the brewing storm in Europe and is not liable to volatile movements like paper based assets. The steep hike in Australia’s mining resource tax was one small negative impulse not only for gold but all metals, but seems unlikely to affect the overall up trend.

Through early morning trading (Asian and European sessions) silver prices headed south to only pick pace during the North America trade as risk appetite lost its footing. Ultimately, the cheaper metal is expected to end the day to the downside, erasing three days of gains. Even more troublesome, the U.S. dollar would enjoy its own advance on safe haven flows and further pull silver down. 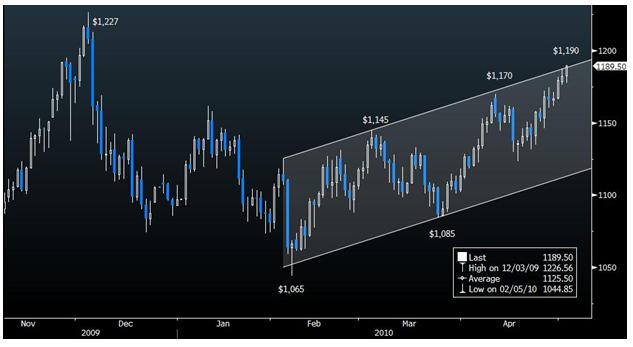